In A Research Agenda for Housing, editor Markus Moos bring together contributors to illustrate and examine the major theoretical, analytical and empirical developments in the housing field, showing housing to be a complex area and an essential priority for public policy. Offering useful analytical tools and evidence-based, interdisciplinary research, this collection will be a key resource for housing researchers, writes Valesca Lima. 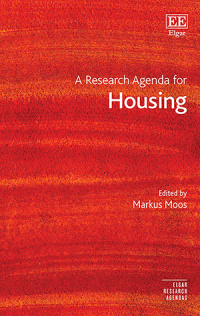 The coronavirus pandemic has exposed to all of us gross systemic inequalities in an unprecedented way. It has shown us how underfunded health systems cannot cope with the demand, how vulnerable our food supply chains are and how a lack of access to adequate housing is a potential death sentence for people living in insecure tenancies and those experiencing homelessness. Published before the COVID-19 outbreak, A Research Agenda for Housing has a timeliness to it. The book sets out to examine the many complexities of housing from different perspectives, using case studies from various countries to illustrate the major theoretical, analytical and empirical developments in the housing field, in addition to offering important outlines for future research on housing-related issues. This edited book is highly evidence-based and provides international comparisons that reflect the interdisciplinary nature of housing research.

Editor Markus Moos, a prolific urban studies researcher, has assembled an experienced group of academics, from professors to early career researchers, to tackle housing studies as a field of great importance and relevance. His underlying argument in curating this book is simple yet insightful: housing is a complex and fruitful area and an essential priority to public policy.

While there is not a single conceptual approach that ties all of its fourteen chapters together, the book’s main thesis is that the future of housing research has to be informed by evidence-based policymaking if we want to promote a more inclusive and environmentally sustainable future. This has an intuitive logic to it. However, in the current context where research inputs from the social sciences have been increasingly diminished by conservative administrations, an open discussion about housing decision-making processes and ‘evidence-influenced’ policy would sustain the book’s arguments better. Nonetheless, the evidence-based policymaking approach is developed and illustrated by the book’s contributors. They provide rich historical, critical and empirical examples of contemporary housing questions, ranging from housing rights and financialisation to public housing, affordability and innovation.

Not all chapters address this issue explicitly, but several chapters consider in one way or another the role of the state in ensuring housing and how it is often failing to safeguard this right. The chapter on the right to housing by Jessie Hohmann, for instance, shows the challenges and possibilities of having housing as a legal right, while critiquing the role of the state in promoting privatisation and the financialisation of housing. She indicates after analysing her two case studies (the Grenfell Tower fire in London, UK, and forced evictions in Uganda) that most states have no commitment to implementing the right to housing.  Also, as shown in the book chapter by Pietro Calogero, Jennifer Day and Neeraj Dangol about housing informality in the Global South, informality is produced and incentivised by different actors, and the failure to deliver housing is not just a failure in public policy, but also a consequence of urban regimes designed to produce and maintain housing inequality.

The second theme is the growth of the financialisation of housing, evidenced in inflated housing market prices, increasing rent unaffordability and homelessness, the withdrawal of the state from direct provision of housing and the amplified role of the private rental sector as the main provider of accommodation. The volume showcases these issues, which are widely recognised in the housing literature as one of the central features of a serious housing crisis many cities find themselves in at the moment.

Different chapters shed light on the combination of the aspects of financialisation mentioned above, although some focus distinctly on the relationship between financialisation and housing affordability. For example, Piyush Tiwari’s chapter on affordable homeownership and mortgages makes an interesting contribution to understanding the impact of mortgage affordability on young households, as the author refers to the consequences of limited credit and difficulties in saving for mortgage down payments. In a similar vein, Alan Walks discusses the policy shifts needed to promote housing affordability, while Rik Damhuis and colleagues take on the dynamics of the life course and housing, focusing on housing transitions and their influence on inequality in the housing market. Taken together, these chapters suggest that, combined with a shortage of public housing, affordability affects social groups in different ways and locations, and has a particular impact on young people.

Each chapter in the volume ends with a suggestion of avenues for further research. In general, most calls involve the need for more comparative housing research, but also more interdisciplinary studies that include migration, race, gender and class. It suggests that in the housing research field we still see the need for more sociological studies that focus on the relation between housing and its effects on specific social groups. For example, Moos himself recognises the book is missing chapters on race, gender and other types of social differentiation, which are important issues due to the fact that the idea of housing is socially constructed and varies according to different contexts.

It is hard to include a balanced geographical coverage in an edited volume, and as Moos also acknowledges in the introduction, contributions from the Global North shape the discussion in this book. I consider this to be the main shortcoming of the volume. One of the most interesting chapters of the book was exactly the one by Calogero et al that focuses on housing informality in Kabul (Afghanistan), Kathmandu (Nepal) and Port Vila (Vanuatu). This chapter presented such a rich description and analysis of multifaceted urban problems that are often forgotten by Global North literature. A similar point is also made in Manuel Aalbers’s chapter, which invites more housing financialisation research outside of the UK, USA, Germany and the Netherlands. Using the example of Brazil, the author argues that financialisation in the Global South is not just a copy of what happens in the North. This volume has certainly offered some first steps in this direction, but more efforts to include Latin American, Asian and African countries in research that involves processes of financialisation are needed.

A Research Agenda for Housing is certainly a key reference resource for housing researchers. It offers useful and contemporary analytical tools for us to better understand housing issues. It highlights some areas in need of further research and also offers interesting frameworks that add to the knowledge of housing innovations.