In Enforcing Freedom: Drug Courts, Therapeutic Communities and the Intimacies of the State, Kerwin Kaye challenges the notion that drug courts are the more effective and humane judicial option to mass incarceration, showing how they uphold a structure of ‘stratified penalisation’ that is significantly intensifying the impact of the ‘war on drugs’ on the racialised poor. Capturing the stark realities of the US criminal justice system, Kaye’s years of research have paid off in this profound, nuanced and pioneering book, writes Alessandro Ford. 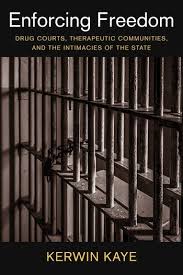 In Florida in 1989, as the racialised mass incarceration of the US-led ‘war on drugs’ continued to escalate, a so-called ‘quiet revolution’ took place within the judiciary: the establishment of the first ‘drug treatment court’. By sending those arrested for drug-related crimes to a court-supervised treatment programme rather than to prison, drug courts became widely perceived in the US as offering an alternative to then-traditional lawmaking norms (such as draconian penalties for crimes previously considered minor). They have since garnered bipartisan support, with progressives lauding the humanitarian transition from punishment to treatment and conservatives promoting their higher efficacy compared to incarceration (both in terms of direct costs and lowered reoffending rates). As of 2014, there were some 3,057 drug courts within the US, collectively handling over 107,000 individuals annually.

Today drug courts are generally seen as a more effective and humane judicial option to mass incarceration. Not so, writes Kerwin Kaye, author of Enforcing Freedom: Drug Courts, Therapeutic Communities and the Intimacies of the State. On the contrary, argues Kaye, drug courts act as a structure of ‘stratified penalisation’ by ‘significantly intensifying the war on drugs for the nonwhite poor, even while lessening its burden for the moderately poor and working-class whites’.

Drug courts are, on the surface, ‘colour-blind’. They offer low-risk minor offenders the chance to avoid prison by engaging in drug treatment programmes lasting anywhere from several months to several years. Treatment divides into the outpatient and the residential, with the latter occurring predominantly in so-called ‘therapeutic communities’ (TCs) that provide individuals with educational opportunities (e.g. getting one’s General Educational Development (GED) certificate), vocational skills and job training. Those that graduate the programme, having abstained from drugs, submitted to the programme’s rules and (crucially) found employment in the formal sector, have their offence expunged and go free. Those who fail are re-incarcerated.

Scratch beneath the surface though and any veneer of progress and humanitarianism rapidly peels away. Drug courts disproportionately accept white participants over non-white, with particular discrimination against African Americans. They disproportionately assign white people to outpatient clinics and non-white people to residential TCs. They rely on the threat of incarceration to coerce the individual’s initial participation and as a ‘therapeutic’ punishment in and of itself (jailing rule-breakers for short periods of ‘shock incarceration’). Approximately half of all participants in the courts fail and are sentenced for their crimes, generally without receiving any credit for the time they’ve spent supervised by the court. Again, those who pass are disproportionately white and middle-class (with white graduation rates approximately twice as high as those of non-white participants). Furthermore, some drug court judges assume a punitive attitude toward those who fail and condemn them to even longer sentences. Far from an alternative to mass incarceration, Kaye therefore argues that drug courts are a sorting mechanism through which the racially- and class-privileged may attain freedom while (racialised and classed) others get locked up for an even longer time than before.

As for treatment itself, Kaye masterfully exposes the genealogical roots of contemporary TCs in Synanon, the first therapeutic community set up to treat addicted people in 1960s California. Its methods included ‘attack therapy’ (staff ganging up to verbally abuse, denounce and humiliate the participant) and ‘brainwashing’ (Synanon’s founder argued ‘addicts’ needed to have their ‘brains washed out’ every so often). It is these contemporary, if softened, ‘Synanons’ that drug courts rely on to ‘treat’ many of their residential participants.

Central to Kaye’s analysis is that, despite all this, neither drug courts nor TCs are actually fundamentally about drug use. A participant may be drug-free (or, for example, only infrequently use cannabis) and yet fail the programme. Rather, drug courts ‘form a technique of social management over the racialised poor’. Treatment seeks not just abstinence, but a rejection of the ‘drugs lifestyle’ (i.e. the informal economy – including the drug trade – and the culture of street life), as well as a ‘holistic’ transformation of the individual who previously engaged in it. Through such framing, drug courts (and by extension the state) seek to medicalise poverty and mask a host of political and social problems – unemployment, housing instability, discrimination, police harassment and so on – behind an individualised and moralistic pathology. Survival-based responses to social and economic marginalisation become character flaws and ‘symptoms’ to be ‘treated’.

In this way, Kaye writes, drug courts are the embodiment of neoliberal governance. Just as classic liberalism delineated freedom and the holding of rights by contrast to the ‘unfree savage’ (a brutalising identity historically imposed on indigenous and colonised populations) who had to be ‘civilised’ or destroyed, so drug courts construct the ‘criminal addict’ as an unfree proto-human who must be ‘rehabilitated’ or incarcerated. Kaye offers a novel interpretation of Jean-Jacques Rousseau’s idea that people can be ‘forced to be free’ –  namely through a ‘humanising violence’ that will lift the inhuman savage into proper ‘personhood’. This violence ‘ensnare[s] the marginal populations of the metropolis […] either to render them ‘‘useful’’ by steering them onto the track of deskilled employment […] or to warehouse them’ in prison. To be ‘rehabilitated’, ‘treated’ and rendered ‘useful’ are all synonymous here: punishment becomes therapy so that punishment ‘disappears’. ‘Treatment’, therefore, centres mostly on ‘readying residents for their future jobs within the lower tiers of the formal labour force’, so they can be converted into docile and de-politicised workers.

Enforcing Freedom is the best book I’ve read this year. It is profound, nuanced and utterly human. This ‘ethnography of freedom’, as Kaye puts it, vividly captures the stark reality of the US criminal justice system, as well as of the US more generally, in a superlative manner. Despite the transatlantic gap for European readers, many of the book’s ideas are sadly transferable and the operations of a ruthless and racialised neoliberal capitalism may seem familiar to many in the UK, even though the penal system they operate in may not. The racial and economic inequalities that root Kaye’s analysis are currently reflected in the disproportionate deaths the coronavirus pandemic has inflicted among non-white and low-income populations in Europe and the US, as well as among America’s incarcerated millions.

One caveat, however, is that this is an academic book written by and for the sociologically-trained. Even with a philosophy background, I got lost several times among jargon-heavy passages. It is also a work that assumes a certain amount of pre-acquired knowledge about the war on drugs, addiction and racialised mass incarceration in the US. Given Kaye’s incredible depth and breadth of knowledge – this project having involved years of research and fieldwork – I would be unqualified to make any real conceptual critique. One point it would have been interesting to have better clarified though is how the inextricable relationship between formal and informal economies – many argue that the former in some ways depends upon the latter – translates into the drug court and TC context. If the state seeks to divert people from the illicit to the licit economy (including via drug courts), but also depends upon the illicit economy to provide much of the natural resources and liquidity upon which the licit economy is based, this seems to yield a paradox in need of further explanation.

Final point notwithstanding, the ability to inspire such questions is precisely why Enforcing Freedom is so magnificent. Kaye’s years of research have paid off in a pioneering book whose intellectual gems make mining its tectonic depths more than worth the effort. Five stars.