The debate over the tall-building boom in London is often torn between those supporting market-led spectacular urban development and those advocating for historic conservation of the traditional cityscape. In Ruined Skylines, Günter Gassner critically intervenes in these discussions, utilising the notion of ruination to show how the city skyline can be a site for radical urban politics. If we are after fundamental change for our cities and a transformation in the way urbanisation is understood and practised, this book offers a fresh and unorthodox framing that is provocative and creative, writes Elahe Karimnia. 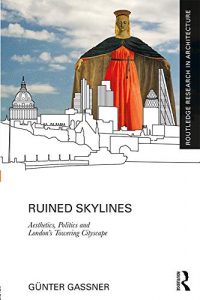 In architecture, conservation of the historic or traditional cityscape, including the visibility of (certain) buildings of civic importance, is a commonly accepted discourse which allows a critique of the visual representation of tall buildings. Günter Gassner’s book, Ruined Skylines, counters this critique in London by highlighting the tension between two common discourses: one concerning market-led urban development, and the other about the preservation of a traditional skyline. The alignment of these two discourses is discussed in relation to ‘conservatism’ as pro-capitalist, counter-revolutionary politics and representations which lead contemporary urbanisation processes in London and many other cities globally. Gassner challenges the reader to gain a deeper understanding of skylines beyond questioning the status quo, existing power relations and their impact on the financialisation and commodification of skylines. He reframes the problem within a larger set of relations and beyond the notions of tall-building booms and their visual representations.

Similar to other cities and their contemporary skylines shaped as the result of market-driven urbanisations, the new London skyline is criticised mostly by highlighting the impact of economic liberalism on traditional visual values, focused on, for example, St Paul’s Cathedral’s increasingly non-central position on the London skyline. The book critiques such critiques by drawing from the theories of urban thinkers such as Hannah Arendt, Jacques Rancière and Walter Benjamin in order to argue that London’s speculative towers do not ruin the historic cityscape, but rather transform the skyline of the city into a site of radical politics. Gassner describes the visual and political character of skylines and their continual tensions that the new London skyline represents. Throughout the eight chapters of the book, the reader delves into a deep understanding of skylines not as a representation of the city as a whole, nor as a linear sequence of spectacles, nor as a static being, but as ‘the condition of manifestation of what the city is doing’: how the city is expressed, a continuous becoming. Skylines don’t represent the city but ‘the city is skylines’ (130).

Gassner questions the value of building high, which is somehow an unquestionable assumption insisted upon by the market. He provides key insights into this assumption that utilise the skyline as a line and as a visual representation of the city to perpetuate the myth that the value of building high is not about the use-value, but rather in its impact on the surroundings and visibility. In other words, it is not enough to build tall, but to be seen. This can be viewed in the spatial separation of the towers built under the power of Conservative governments in the 1980s and 1990s in London to avoid tension with the traditional values of cityscapes (for example, the development of Canary Wharf). Since 2000, plans have kept promoting market-led strategies of urban development, and under similar conservative thinking, the critique of the new towers, as new conservative representations are about framing the skyline in relation to the visibility and centrality of St Paul’s Cathedral. 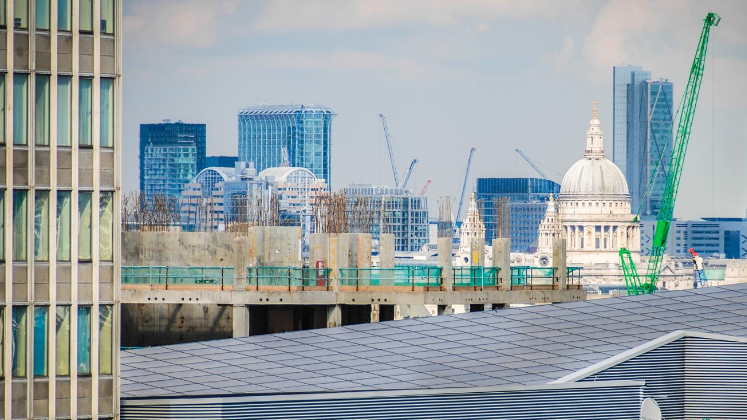 The core theoretical understanding of the skyline in this book is the reframing of what is seen and visible in cities: not only whether the speculative towers are being built or not, but how their construction is actually being viewed (45). Gassner uses the discourse of ruination, derived from Benjamin and Gilles Deleuze, to assert the need to actively reframe the city. Through an impressive theoretical discussion, Gassner highlights the roles of history, religion and capitalism in the creation of values in politics and design, which have an impact on how the new towers are viewed. By interrupting commonly accepted values which assume the skyline as a representation of the city, Gassner shows that skylines are not simply an achievement of existing, and what are assumed to be unchangeable, power relations; rather, they hint at design agency and its obsession with formalised visual representatives. Conclusions about skylines’ beauty, for example, within existing social and economic arrangements, become invalid because ‘beautification operates within an agreed sense of visual order and rightness’ (123).

At the same time, skylines should be representative of the possibilities and vitalities of reframing, in which they become sites for polemics and bringing inequalities in the city to the fore (39-42). Based on Arendt’s plurality discourse in politics, Gassner suggests viewing towers and sacred buildings all together as opportunities for political freedom and for realising plural appearances, which then interrupt the traditional ordered city and politics, shaping it in significant ways. As he argues and illustrates through striking political images and drawings, different perspectives and alternative visualisations reveal multiple ways of seeing and imagining cities free from existing political representations. In these interesting ways, skylines can assist in political actions and can become sites of radical politics. Thus, skylines are about making sense of the city, and their aesthetics should be sought in the politics that foster different points of view.

Through these political skylines, Gassner challenges conventional notions of fixed viewpoints, compositional wholeness, linear sequences and financialised capitalism. He convincingly discusses why we need political images of our cities: images that can problematise the link between value conservatism and economic liberalism, that can forge a relational understanding of space and time. He supports his argument by presenting his magnificent interruptive illustrations (i.e. political images, in his framing) that redirect and reframe London’s skylines, showing that meanings and values are constantly changing based on different, plural ways of seeing them. In this regard, skylines as political images have the possibility of empowering harmonic relationships between the sacred and speculative that might be nonetheless visually striking contrasts. So, instead of analysing sacred and speculative buildings in contrast with each other, he recommends framing the visual irregularity and accidental skylines as productive spaces of new possibilities.

Gassner applies this critical analysis also to his style of writing, in the sense that concepts in the book are discussed via multiple framings and presented in a dialectical process. While this might affect the pace of reading the book, it nonetheless allows the reader to learn about multiple perspectives on each concept. The patient reader walks slowly towards understanding how certain visual and political values are dominated by conventionally obsessive framings and are accepted indisputably. Gassner thereby consciously avoids a linear analysis and sequence of arguments as, for example, the chapter on history comes in the second half of the book, contesting a continuous historical narrative about skylines.

Ultimately, Gassner’s main contribution towards understanding London’s tall-building boom is his rich and dense critique of it. The book offers a critical yet constructive approach to resolve the tensions in the contrasts between spectacular and sacred buildings, which is the result of the alignment of value conservatism and economic liberalism and is seen through the new London skyline. Ruined Skylines’s critical understanding of urbanisation processes can be applied to larger urbanisation strategies, and to other contexts as varied as Buenos Aires, Toronto, Tehran or Stockholm, the future skylines of which are the subject of debate. By showing how to politicise visuals, the book sits alongside other studies that engage with multiscalar debates around urbanisation and its different outcomes. If we are after a radical change for our cities and a transformation in the way urbanisation is understood and practised, Ruined Skylines offers a fresh and unorthodox framing that is provocative and creative.

Dr Elahe Karimnia is an Associate at Theatrum Mundi leading the Urban Research and Spatial Practice. She is a practiced architect and urban designer and has a PhD in Urban Studies with a focus on ‘Producing Publicness’ from KTH Royal Institute of Technology in Stockholm, where she is a guest teacher and critic. Elahe has been engaged in research and practice at the intersection of urban design and critical theory.