In Country Frameworks for Development Displacement and Resettlement: Reducing Risk, Building Resilience, editors Susanna Price and Jane Singer bring together contributors to offer a deep exploration of evolving national frameworks that seek to mitigate the risk and deprivation faced by vulnerable communities displaced by the global competition for land. The chapters in this thought-provoking and comprehensive book carefully build a rigorous documentation of policies and legal practice to form a vital resource for academics, students and specialists working with land rights, writes Indrani Sigamany. 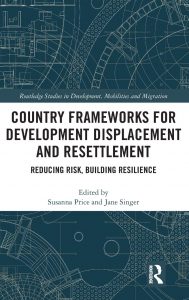 Susanna Price and Jane Singer’s edited collection, Country Frameworks for Development Displacement and Resettlement: Reducing Risk, Building Resilience, is a deep exploration of evolving national frameworks, such as safeguards, protection, laws and regulation, in response to the global competition for land by public and private sectors. The central question the book addresses is how countries use frameworks and legal norms to respond to and mitigate the risk and deprivation faced by vulnerable communities displaced by the expropriation of land. The inclusion of cases in the fifteen chapters covering Asia, Africa and Latin America contributes to the rigour of this thought-provoking and comprehensive book.

The cases contained in this book, drawn from around the world, are an attempt to answer questions regarding the necessity for states to have powers of eminent domain (the right of governments to expropriate private property for public use with compensation) as well as the human, social and environmental costs of economic development afflicted with poor financing and weak implementation. The stated objective for countries triggering forced migration is to take responsibility for the protection of their citizens with social and environmental safeguards. The three sections in the book address national challenges and conceptual frameworks, offering rich evidence through case studies to support the analysis.

The general agreement of all the authors is that country frameworks are important for accountability and national ownership around social and environmental safeguards for land displacement. They question, however, whether national standards of implementation strictly adhere to human rights. Currently, frameworks do not match implementation on the ground. The book points to the inaccurate assumptions made by the World Bank (WB) in 2017 when it based its conclusions regarding the readiness of countries to adopt national frameworks on poor evidence. The WB emphasised achieving ‘objectives materially consistent’ with WB policy, without acknowledging that regulatory frameworks on eviction and displacement are, as Price points out, ‘rarely able to achieve objectives materially consistent with the Environment and Social Framework (ESF)’.

One brutal conclusion is that existing safeguarding systems can exacerbate gender disparities, exclude indigenous communities and create poverty. Country frameworks are therefore unable to guarantee a fair or just outcome concerning livelihoods, or economic and tenure security for communities being forced to migrate. Price and Singer conscientiously connect their analysis to the United Nations Sustainable Development Goals. They advocate ‘pre-emption’ in relation to the ecological footprint of projects and policies; ‘equity’ in the choice of development strategies; and resilience for communities by strengthening social and natural capital.

In Chapter One, Ruwani Jayewardene points out the need for national laws to protect citizens against profit-oriented globalised industry which leaves citizens vulnerable. In the light of state laws being weak, however, and not protecting citizens, the author advocates for improving both national laws and access to international courts. Salamón Nahmad Sittón, in his chapter, highlights the importance of Free and Prior Informed Consent (FPIC) for indigenous peoples facing land dispossession, though this is often offset by unequal power relations and authoritarian bureaucracy. In Mexico, in lieu of mitigating laws and regulations on displacement that allow the violation of community rights, public policy has helped create a space for self-determination of indigenous communities.

Chris De Wet’s chapter argues that laws and policies should be country-specific and locally appropriate, and in South Africa, for example, they should be shaped by and have the buy-in of local government, civil society and multilateral development banks (MDBs). Russell Rhoads and Onesmus Mugyenyi similarly highlight community empowerment for the improvement of policy and country frameworks, stressing environmental and social risks and also the importance of local capacity building for implementation.

Sek Sophorn examines the clash between international and national legal norms in which national land laws take precedence and are not necessarily interpreted from a rights-based perspective. Forced displacement without FPIC has occurred with a loss of customary social, cultural and economic lives. Similarly, Jeanne W. Simon and Claudio Gonzáles Parra illustrate that international standards have no consequence when protecting customary land rights of indigenous peoples in Chile. Hydropower and energy infrastructure supersede customary land rights and human rights in a context of poor local legal protective frameworks. In Timor-Leste, as in Melanesian and neighbouring countries, customary land rights remain unrecognised. Bernardo Almeida refers to the 2017 Land Law in Timor-Leste, which has not yet begun to be implemented, and therefore only promises tenure security to certain groups, excluding informal urban dwellers and communities displaced in 1999 during the secession from Indonesia. Discussing safeguarding policies for infrastructure projects, Almeida concludes that international institutions provide better protection than the national government for displaced communities.

Examining the potential for national and international legal frameworks in Southeast Asia, Andreas Neef argues that in five Southeast Asian countries – Cambodia, Indonesia, Laos, Myanmar and the Philippines – legal frameworks have been designed to facilitate expropriation by corporations and political and economic elites, providing poor protections for customary landowners. Celine Salcedo-La Viña echoes this in her claims that liberal investment laws do the same in countries such as Tanzania and Mozambique. Price and Nicholas Tagliarino contradict this claim of compulsory acquisition in Indonesia and the Pacific and Lao PDR with examples of negotiated settlements, strong constitutional protections and landowners’ ownership of the process of development of their lands. Laos is used in this book as a contradictory example in separate chapters as having both strong protections and weak ones, which confuses the issue of compulsory displacement.

Price and Tagliarino stress that monitoring is vital for the sustainability of protections of land, livelihoods and wellbeing, as does Nadine Walicki, who emphasises government responsibility for monitoring the situation of people internally displaced (IDPs) and for building local capacity to compile data. Walicki’s focus is on country data informing national laws and policies, especially since figures on IDPs are difficult to compile or do not exist.

Asmita Kabra and Budhaditya Das point out that India’s Right to Fair Compensation and Transparency in Land Acquisition, Rehabilitation and Resettlement Act, 2013 (LARR), ranks among the best country safeguard systems for land in the Global South. Kabra and Das highlight evidence from LARR’s implementation of national safeguards which are liable for local scrutiny and more rigorous accountability standards, proving that litigation and local judicial processes have resulted in a jurisprudence that has favoured communities vulnerable to development-induced displacement and resettlement (DIDR). India also has the Forest Rights Act 2006, which unfortunately is not mentioned in this book, and which has in place full legal and regulatory measures offering ownership and title rights, community forest rights, usufruct rights and rights to rehabilitation and relief, among others. Price and Singer’s claim that no ‘country has in place the full legal and regulatory measures to enhance the lives and livelihoods of those developmentally displaced’ disregards and contradicts the full legal measures of India’s FRA.

Salcedo-La Viña, writing on gender justice, discusses how inherent ambiguities in legal frameworks cause an intersectional discrimination which disproportionately violates women’s rights when dispossessed of community lands. Systemic patriarchy resulting in women not being named as heads of households excludes them from ownership rights to property and to FPIC. The three countries discussed in this chapter differ from India’s more equitable legal rights for women under the FRA; since this is not discussed in this book, this might skew the impression of women’s land rights in national frameworks.

In Sri Lanka, Sam Pillai writes about the Land Acquisition Act (LAA) which is still used as the benchmark. This is detrimental to the compensation of land loss, despite a gender equitable resettlement policy of 2001 being approved by the Cabinet, which unfortunately is non-justiciable. In Vietnam, Singer explains that legislation governing dam resettlement since 2014 appears more generous, but it is not comprehensive and falls short on livelihoods and benefit-sharing protection for IDPs. In China, similarly, the Land Administration Law (LAL) land compensation, using multiples of annual average output value, does not facilitate the re-establishment of livelihoods. Duan Yuefang, Brooke Wilmsen and Zhao Xu, engaging with state encouragement for urban resettlement, conclude that rural to urban resettlement entails risks of social disintegration, social unrest and impoverishment resulting from unemployment, food insecurity and debt.

The primary purpose of the volume is to introduce a topical arena that has had little attention or reflection from busy practitioners as a means for continuing discourse on these crucial issues. The combined fifteen chapters in the book carefully build a rigorous documentation of policies and legal practice and contribute to an eclectic discussion of country frameworks relating to DIDR. The book comprises a vital resource for academics, students and specialists working with land rights, and lays out powerful and clearly stated conclusions advocating development strategies being inclusive of displaced communities in order to circumvent impoverishment.

Indrani Sigamany is a research consultant and works with social justice and poverty alleviation. She specializes in displacement of mobile indigenous peoples, gender and human rights. Indrani has straddling roles as both practitioner and academic, and has worked in more than fifteen countries in the field of international development. Indrani’s PhD is from the Centre for Applied Human Rights, York Law School, University of York, UK. Her Masters degrees are from the International Institute of Social Studies (ISS), Erasmus University, Rotterdam; and from Tata Institute of Social Sciences (TISS), Mumbai. Indrani has a Bachelor’s degree from Whitman College, WA, USA. Indrani lives in Oxford, England.