In The War on the Uyghurs: China’s Campaign Against Xinjiang’s Muslims, Sean R. Roberts offers a new account exploring how the US-led Global War on Terror has been used by China as a cover for the persecution of the predominantly Muslim Uyghur population. Giving a voice to the Uyghurs themselves and providing detail that only an expert can offer, this book is an empathetic and deeply informative work for those hoping to understand the humanitarian crisis in Xinjiang, writes Charles Dunst. 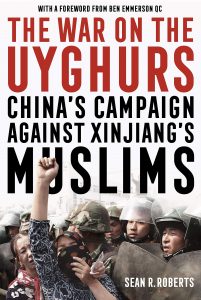 Years before COVID-19 was first identified in the Chinese city of Wuhan, the Chinese government had already set its targets on another purportedly dangerous pathogen: Islamist extremism, which Chinese officials said was ‘infecting’ the Uyghurs, the predominantly Muslim indigenous peoples of northwest China’s Xinjiang region.

In 2014 and 2015, the People’s Republic of China (PRC)’s bio-politicisation of this supposed threat reached its zenith, with the PRC Justice Department’s Party Committee Secretary suggesting that some 30 per cent of Uyghur villagers were ‘polluted by religious extremism’ and required ‘concentrated education’ (203). The secretary added: ‘when the 30% are transformed […] the village is basically cleansed’ (203). Long before the world was reintroduced to the concept of ‘quarantining’ as a measure to avoid the spread of COVID-19, the PRC had deemed such treatment necessary to deal with the Uyghurs ‘in order to ensure that the alleged infection of ‘‘extremism’’ did not spread to others’ (203), as Sean R. Roberts writes in his exceptional new book, The War on the Uyghurs: China’s Campaign Against Xinjiang’s Muslims.

Roberts, an associate professor of the practice of international affairs and director of the International Development Studies Program at George Washington University, convincingly shows through extensive interviews and Uyghur language sources that the PRC’s claims of a large-scale Uyghur ‘terrorist threat’ are profoundly disingenuous. Yet they found purchase following 9/11, allowing the PRC to fold the Uyghurs into the ‘Global War on Terror’ (GWOT) in order to suppress them. This, however, created a ‘self-fulfilling prophecy of Uyghur militancy’ (20) that, in turn, gave the PRC only further justification to clamp down on the Uyghurs in what Roberts and others have termed ‘cultural genocide’. For those hoping to understand both the motivations behind and practicalities of China’s brutal crackdowns, Roberts’s book is a deeply useful, if disturbing, read. 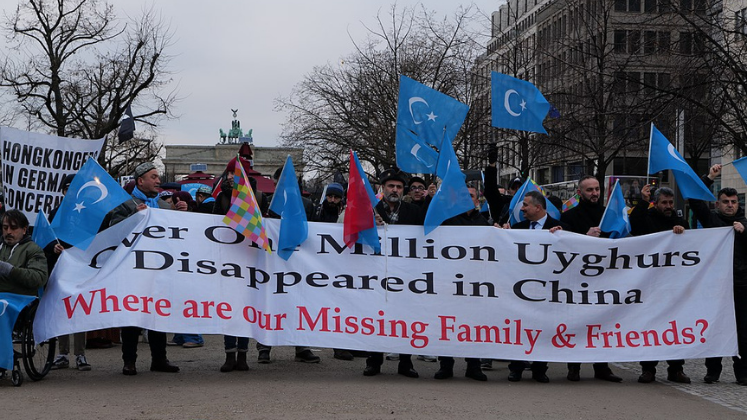 The War on the Uyghurs offers a history of what Roberts calls Chinese colonialism, arguing that ‘modern China’s relationship with the Uyghurs and their homeland has always been, and continues to be, one best characterized as colonial’ (23). Not only has the Chinese state successfully wrought control of the Xinjiang region from those indigenous to it, but the Han population, evoking the colonial idea of ‘civilising’ the colonised, distinguishes the Uyghurs and other local Turkic people ‘as fundamentally different from and inferior to the dominant Han population and, thus, incapable of becoming equals to the Han or of even knowing how to best care for themselves’ (24), as Roberts writes.

This attitude towards the Uyghurs has persisted from the Qing Dynasty’s 1750s conquering of the region — which received the title of Xinjiang, or the ‘New territory’, only in 1884 — up until today. It also explains why Beijing made sure that the Uyghurs’ two para-states, the First and Second Eastern Turkistan Republic (ETR), were short-lived.

The first ETR, founded in 1933 by ‘indigenous intellectuals inspired by a variety of ideologies of self-determination’ (36), fell in 1934 to Dungan (Hui) armies but continues to cast a long shadow on Xinjiang’s historical memory, with many Uyghurs hoping to recreate this era of self-rule. The second ETR was slightly longer-lived, lasting from 1944 to 1949. Its demise was tied to an August 1949 plane crash that killed five ETR leaders, saving both regional powers, China and the Soviet Union, from having to deal with the independence-minded Uyghurs for decades. This paved the way for PRC control of the region.

From colonialism, Roberts takes us into the era of counterterrorism, showing how PRC leaders seized on George W. Bush’s GWOT to implicate the Uyghurs within it and, accordingly, legitimise the illiberal repression of them as ‘terrorists’.

Only five weeks after 9/11, a Chinese Foreign Ministry spokesperson went on what Roberts calls a ‘tirade’ against the East Turkistan National Congress, a Europe-based Uyghur advocacy group, calling them, without evidence, a ‘terrorist force with the objective of splitting China’ that ‘has closely colluded with international terrorist organizations to undertake numerous horrible violent terrorist acts’ (69). Soon after, PRC officials at the United Nations in New York, again without evidence, claimed that the Uyghurs were directly connected to Osama bin Laden, the GWOT’s number one enemy (70).

While more than a few US policymakers and scholars were suspicious of China’s claims regarding Uyghur-led terrorism, the United States nonetheless deemed the ‘Eastern Turkistan Islamic Movement’ (ETIM) — a Uyghur separatist group alleged to be operational in Afghanistan — a terrorist organisation in August 2002. This was despite the fact that the US Assistant Secretary of State for Democracy, Rights and Labor had only months before said that the PRC had ‘chosen to label all of those who advocate greater freedom [in Xinjiang], near as I can tell, as terrorists; and we don’t think that’s correct’ (77).

What changed, as Roberts suggests with ample evidence, was that the United States granted Beijing its wish — US confirmation of the Uyghurs’ ‘terrorism’ — in exchange for China’s broader support for the GWOT.

The question of whether Uyghur violence constitutes ‘terrorism’ comes down to definitions. Roberts, acknowledging that ‘terrorism’ is notoriously difficult to define, describes it as an act that is ‘violent, politically motivated, and deliberately targets civilians’ (13). Accordingly, he notes that the overwhelming majority of Uyghur attacks, while certainly violent, do not fit this definition of terrorism, as they ‘either did not target civilians or did not even constitute premeditated political violence’ (74). Instead, they targeted police stations and other PRC apparatuses; Roberts therefore argues that they are more accurately described as Uyghur guerilla warfare (74).

In Roberts’s view, only a very small number of incidents since 9/11 fits this definition of terrorism, including the knife attacks at Kunming train station in 2014, which left 31 civilians dead, and two bombings in Urumqi later in the same year that, combined, killed 45. But the PRC extends the ‘terrorist’ label to ‘any thought, speech, or activity that by means of violence, sabotage or threat, aims to generate social panic, influence national policy-making, create ethnic hatred, subvert state power, or split the state’. Whereas Roberts sees Uyghur violence as resistance to oppression, the PRC classifies Uyghur resistance against the Chinese state as terrorism in order to legitimise its own crackdowns.

But PRC violence has only begat Uyghur violence, bringing into existence what Roberts calls a ‘self-fulfilling prophecy’. While small numbers of Uyghurs had made their way to extremist groups in the Middle East and Central Asia over the years, it was only after China began its war on terror in Xinjiang that these numbers and Uyghur attacks against the PRC increased. Those who travelled to Syria, Roberts writes, ended up ‘fight[ing] in a foreign war far from their homeland, either in the hope of one day using their experience to fight the Chinese state or merely as a means of survival and a sense of belonging’ (194). A number of those who stayed home in Xinjiang responded to growing oppression by picking up low-level arms against the PRC.

Yet the actual threat posed by Uyghur groups to Chinese national security is effectively ‘imaginary’, as Roberts argues. Uyghur resistance has indeed been violent at times, but Uyghur groups, both at home and abroad, simply do not have the resources to truly pose a threat to the Chinese state. This, however, did not stop Beijing from creating the disturbing reality — the ‘cultural genocide’ of the Uyghurs through the mass internment, surveillance and forced labour that Roberts describes in later chapters — with which we are familiar today. The PRC’s goal, meanwhile, is not to tamp a real terrorism threat emanating from the Uyghur community but, as one Han official put it, to ‘break their lineage, break their roots, break their connections, and break their origins’ (235).

Roberts argues that the PRC has under GWOT’s auspices produced a tragedy to which the global response has been lacking — and that if this crisis is allowed to go on unabated, the racist logic of settler colonialism, coupled with mass repression and ethnically profiled population control, will find greater purchase the world over. He also argues that the West, thanks to its own GWOT-era human rights failings, has lost seemingly all of its moral clout to pressure China. This strikes me as too pessimistic, given that the US and others still retain substantial soft power across the Global South, parts of which are becoming increasingly hostile to China. Current trends, however, do indeed give reason to be pessimistic.

Most of the world’s majority Muslim countries, many of whom have close ties with China, have remained largely silent, while the West, itself deeply enmeshed economically with China, has offered little in the way of a meaningful response. John Bolton claimed in his recent book that former US President Donald Trump, for his part, had told his Chinese counterpart, Xi Jinping, that he thought building internment camps for the Uyghurs ‘was exactly the right thing to do’. In contrast, Trump’s successor, President Joe Biden, whose campaign said that China’s repression of the Uyghurs rises to ‘genocide’, is expected to take a tougher stance on the issue.

But while international condemnation is growing, the world’s response remains lacking. For instance, when outgoing Arsenal footballer Mesut Özil, a German Muslim of Turkish heritage, spoke out on social media in support of the Uyghurs with a post bearing the first ETR’s flag, his employer cowered to China’s economic clout, posting on their Weibo page that Arsenal has ‘always adhered to the principle of noninvolvement in politics’. Özil, to his credit, did not back down, while another Muslim professional footballer, Senegalese striker Demba Ba — who previously played in China — joined him, asking, ‘When are we going to see the rest of the world stand up for Muslims?’

Giving voice to the Uyghurs themselves and drawing attention to this crisis, The War on the Uyghurs is striking, empathetic and deeply informative. Providing detail that only an expert can offer, Roberts documents what is perhaps today’s worst tragedy. Ultimately, Roberts’s contribution serves as a vital testament to the Chinese government’s strategic brutality in Xinjiang, the Uyghurs’ perilous position and the world’s failure to live up to its promise of ‘never again’.

Charles Dunst is a Visiting Scholar at the East-West Center in Washington, an Associate at LSE IDEAS, and a Contributing Editor of American Purpose, a new magazine founded by Francis Fukuyama and Jeff Gedmin. He has written for outlets including The New York Times, The Atlantic, The Washington Post, Foreign Policy, and the Council on Foreign Relations. He can be found on Twitter @CharlesDunst