In Uncertain Archives: Critical Keywords for Big Data, editors Nanna Bonde Thylstrup, Daniela Agostinho, Annie Ring, Catherine D’Ignazio and Kristin Veel bring together scholars to think about various key terms associated with big data. This is a valuable contribution that invites readers to question and expand their critical vocabularies, writes Catriona Gray, and will particularly appeal to researchers in STS, applied data science, digital humanities and many others who are thinking about and with data across disciplines. 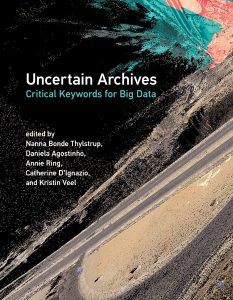 Joining a wave of collective knowledge projects aimed at interrogating concepts and terminology, Uncertain Archives invites us to think about various keywords associated with ‘big data’. The vision is clearly ambitious. Made up of an introduction and 61 essay-length contributions, the book goes beyond a mere glossary by offering ‘transdisciplinary dialogues between scholars, activists, and artists from a multitude of disciplines’.

The overarching themes of ‘uncertainty’ and ‘archive’ are established in an introductory chapter which offers a clear rationale for the volume. The editors are particularly concerned with the ways in which big data promises certainty whilst producing uncertainty. New data regimes (and their associated technologies) in many ways render more things more predictable. Proponents of big data claim it can anticipate and control all manner of risks – ecological, medical, juridical, etc. At the same time, however, data-driven technologies can thrive on uncertainty by exploiting unusual and high-gain opportunities such as data-driven high-frequency trading. Uncertainty is in fact a pervasive governmental modality characteristic of neoliberalism, and big data must be understood as producing and deploying uncertainty within these arrangements. As the contributing authors demonstrate, this ambiguous quality is what makes big data potentially so powerful.

Big data works not only by codifying and revealing, but also by obscuring and omitting. It organises knowledge and information in ways which selectively, partially and strategically include certain objects, whilst denying their materiality. The volume invites us to make sense of these phenomena as part of longer archival histories. By refashioning various poststructuralist critiques of archival reason, we can shed light on the epistemologies, injustices and anxieties reflected in contemporary data practices. But as well as these continuities, digitalisation and other technological advancements also effect disruption to archival orders. In this era of big data, we are told, ‘the notion of the archive moves from a regime of knowledge about the past to a regime of future anticipation.’ Datafication also entails important changes to the scope and attributes of archives. Records of the past, which generally refused to capture data derived from affect and embodiment, now give way to ‘repertoires of embodied experience’ through technologies like emotion recognition and the ubiquity of sensing devices.

The essays in the volume include a broad range of approaches drawn from across disciplines including philosophy, cultural theory, computer science, statistics, sociology, political geography, design and information studies. Some chapters introduce novel concepts and approaches. Amongst these is ‘Migrationmapping’ by Sumita S. Chakravarty, which offers a critical and literary genealogy of mapping practices and proposes an approach for thinking about how maps shape our ideas about migration in the digital age. Other contributions address more familiar and weighty topics like ‘Abuse’ by Sarah T. Roberts and ‘Expertise’ by Caroline Bassett. Luciana Parisi’s chapter on ‘Instrumentality’ is challenging to the non-philosopher but worth the commitment.

Readers may be familiar with some of the arguments presented by the contributors. In some cases, this is no shortcoming. Louise Amoore’s excellent chapter on ‘Ethics’, for example, manages to distil key arguments from her latest monograph Cloud Ethics whilst addressing the themes of the volume. In other cases, authors could have done more to bring their existing work into dialogue with fellow contributors. In one example, David Lyon presents his well-known research on surveillance as social sorting and offers incisive reflections on how new data regimes are reshaping these processes. However, its links to the book’s specific themes of archive and uncertainty are not made explicit.

Though the cross-disciplinary coverage is impressive, the volume could have benefited from a more focused engagement with sociological approaches and concerns, including those from science and technology studies (STS). For an intervention in the field of critical data studies, one may have expected more of a nod to work associated with the journal Big Data and Society or, for example, to David Beer’s work on the data analytics industry. Similarly, the concept of big data could have been more thoroughly interrogated and disaggregated. While the book as a whole is about data, many of the chapters placed more emphasis on the technologies and software which depend on (but often exceed) data. In Erik Ulman’s contribution ‘Conversational Agents’, for example, it is acknowledged that ‘their [conversational agents’] learning from big data is not a revolution but rather one significant incremental advance among others’. Exactly where we might draw the contours around the ‘big data archive’ – whether it encompasses the entire sociotechnical system or just the data – is, perhaps rightly, left open to further consideration.

The overall coherence of the volume is well established in the introductory chapter. We learn about the trajectory of the project and how it developed such an expansive scope and purpose. Although a clear rationale which links the twin themes of archive and uncertainty is set out, the extent to which individual essays talk back to these themes, understandably, varies. Similarly, a number of thematic flows and constellations are identified, including questions around material processes and imaginaries of data as well as ways of rethinking ethics and justice. However, the reader’s ability to think through these connections suffers as a result of the alphabetical arrangement of chapters which precludes any grouping together by theme (though this is partly mitigated by a well-constructed index).

The volume as a whole will particularly appeal to scholars from across STS, applied data science, digital humanities and many others thinking about and with data across disciplines. Whilst my own experience as a reviewer meant engaging with the text in its entirety, it is unlikely that all audiences would read this kind of glossary-style volume sequentially. For a project aiming not to define or chart a field but to help construct an ‘engaged alliance’ for critical thinking and action around big data, Uncertain Archives makes a valuable contribution. As readers, we are encouraged to both question what we know already and to expand our own critical lexicons. Perhaps the next step for this collective, interdisciplinary endeavour would be to identify where our epistemological, ontological and axiological positions do not easily align, and to develop new methods to mediate and work with those differences.

Catriona Gray is a PhD student at the University of Bath's CDT in Accountable, Responsible and Transparent AI (ART-AI) and Department of Social and Policy Sciences. Her research examines the forces shaping the adoption of artificial intelligence technologies within the global refugee regime.