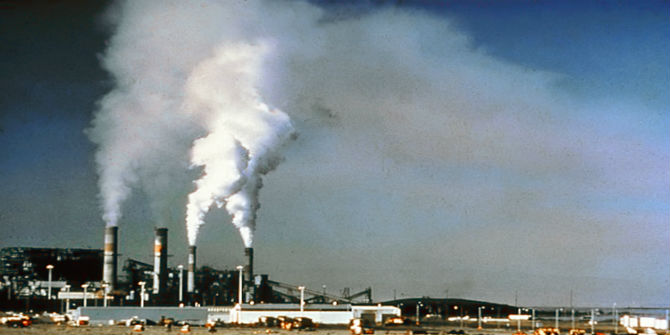 Long gone are the days when scientists disagreed about the mere existence and causes of climate change. Yes, climate change deniers still exist, but they are, as Lord Deben  (Chairmen of the UK Committee on Climate Change) says, just “Trolls” that are fighting against overwhelming scientific evidence. Scientific findings on climate change, summarised in the IPCC reports, were crucial in kick-starting international action on the problem. When signing the UNFCCC in 1992, the 195 parties recognised humans’ role in causing climate change and agreed to reduce their emissions to prevent catastrophic climate change.

Yet, when one walks around the conference centre where the UNFCCC negotiations take place, one can’t help but realise that the climate debate is far from over. Indeed, it has never been as heated and most plenary sessions resemble battlefields of unresolved issues. What are these issues, and why is there such disagreement if the scientific consensus is so clear?

More developed countries (MDCs) have fuelled their economic development by burning fossil fuels, releasing tons of greenhouse gases (GHGs) in the process. GHGs have a long atmospheric lifetime –sometimes even greater than a 100 years! This meaning that these emissions have already committed us to a global 0.8°C temperature rise and the consequent climate impacts, in particular sea level rise. The impacts of climate change will be unevenly distributed across the world, and mainly affect the least developing countries (LDCs). LDCs are more vulnerable to climate change impacts not only because of their geographical location but also because of their economic and social vulnerability. Therefore, MDCs have a historical responsibility to help LDCs build up their climate resilience. The UNFCCC parties have recognised their “common but differentiated responsibilities,” to ensure that addressing climate change was done in a fair manner. The drama begins here. Fairness does not mean the same thing to everyone. Rather, it varies according to one’s worldview and position on the economic ladder. In other words, the climate debate is not only about the reality of climate change anymore, it is also about issues of fairness, visions of the world, and responsibilities.

In theory, the UNFCCC process is procedurally fair. Parties all have the same weight in decision-making and everything works by consensus. While this ensures that no party has veto power over others, it also has the potential to slow the negotiations process down. Last summer, I represented the UK Youth Climate Coalition (UKYCC) at the ADP sessions in Bonn. I had the opportunity to attend the plenary sessions and engage with a variety of political actors (negotiators, researchers, representatives of indigenous peoples etc.). The first day, I was full of hope, and possibly a bit naïve, thinking that negotiators were going to be talking about how best to educate citizens about climate change, how to ensure that climate change is addressed in a rights-based manner and the best ways to ensure compliance with the treaty. But instead of engaging with such issues, negotiators spent hours arguing about the need to add brackets to a sentence in the 154th paragraph of a 86-page draft document. They argued and argued for hours, sometimes to the point that the “bracket issue” had to be postponed to another session. I felt powerless. I wanted to intervene, ask them to discuss about the ways to ensure justice for the impacted people, but I couldn’t. Civil society can only intervene at pre-determined times and for a specified amount of time. Outside of these times, it can only watch as negotiators argue about commas and brackets. Thus, a consensus-based approach can ensure procedural fairness, but it does not ensure constructive progress on the text. Nor does it ensure that every voice gets heard.

Take the example of losses and damages. The latest IPCC report shows that there is limits to adaptation. In other words, countries will suffer irreparable losses and damages due to climate change. This issue was raised 20 years ago by small island states, but it was not until the entry of a US delegate in a cold conference room in Doha at 3am that it became an official part of the UNFCCC agenda. Thus, no matter the number of LDCs in favour of it, loss and damages required the support a major economic power to become politically viable. This showcases the power imbalances between MDCs and LDCs that are so characteristic of international negotiations. The Alliance of Small Island States and the Least Developed Countries Bloc want the Paris text to acknowledge loss and damage. However, most MDCs argue that it would be better placed in a –less legally binding- COP decision rather than in the core text. It is still unclear where it will end up in the final Paris agreement. The last draft released by the UNFCCC chairs included a paragraph on loss and damage in the legally-binding part of the text. Only Paris will tell if it stays that way.

Another contentious issue is the 2°C temperature limit. In June, the G7 agreed to limit temperature rise to 2°C. Doing so gives us a 50% chance of avoiding catastrophic climate change. Yes, you read that right. Only 50%. Apparently, our world leaders like playing Russian Roulette with our lives. The IPCC, who initially supported the 2°C limit, affirmed that limiting our emissions to a 1.5°C rise in temperature is wiser. More than 100 countries, including those most vulnerable to climate change, and Christiana Figueres, the UN climate chief, support the latter goal of 1.5°C. Too late. The 2°C has already been picked up by the media, and received the backing of most MDCs. Furthermore, climate pledges are added up to see whether they cross the 2°C target – not the 1.5°C one. And they do cross it. 146 countries, representing 87% of global emissions in 2010, have now submitted their Intended Nationally Determined Contributions (INDC). While these climate pledges clearly constitute a ‘historic step towards decarbonisation’ they still leave us on track for a 2.7°C world. Hopefully the remaining INDCs that will be submitted before Paris will be ambitious enough to bridge the current emissions gap.

Now you may ask: what is civil society’s contribution to this, if even countries with equal decision-making weights are not always heard by the economic superpowers? I would say it performs 5 central tasks:

For example, representatives of the Women and Gender and the Youth constituencies, of environmental organisations and of indigenous peoples, are now lobbying negotiators to include human rights in the Paris Agreement. They have agreed on a paragraph to be included in the core text, but are finding resistance, especially because of the inclusion of gender equality in the paragraph. While I find it insane that we still have to convince parties that including human rights is a good idea, such a task is essential if we want climate change to be addressed in a just, non-discriminatory way.

Considering COP21 through the fairness looking glass reveals that underpinning the whole process is a deeper negotiation about the values that the world wants to be governed by. COP21 began today. Let’s make our voices heard and push for the values we believe in!