Why are certain groups of people overrepresented in the criminal justice system?

Criminal statistics usually categorise social groups according to religion, race, gender and class. But, why are certain groups of people systematically overrepresented in the criminal justice system? We do not assume the existence of a single criminal justice system or definition of crime : both vary across space and time, and levels of overrepresentation vary accordingly. Overrepresentation also suggests two types of problems : groups more likely to commit crime, and those more likely to be arrested. This pieces shows the multi-causality of overrepresentation. The first part argues that these groups are overrepresented because more likely to be arrested due to target policing, and the influence of the media in shaping public opinion (institutionalised racism). An intersectional approach only may fully explain which groups are most overrepresented. The second part attempts to understand higher risk levels for some groups, by exploring structural factors: different levels of inequality, linked to types of welfare states, embedded ideologies (neoliberalism) and approaches to crime and punishment (retributivist, utilitarian). Ultimately, overrepresentation of economically and socially excluded groups is higher in liberal welfare states like the Unites States, also fuelled by neoliberalism and a retributivist approach – the incarceration of those financially excluded from markets committing crime. 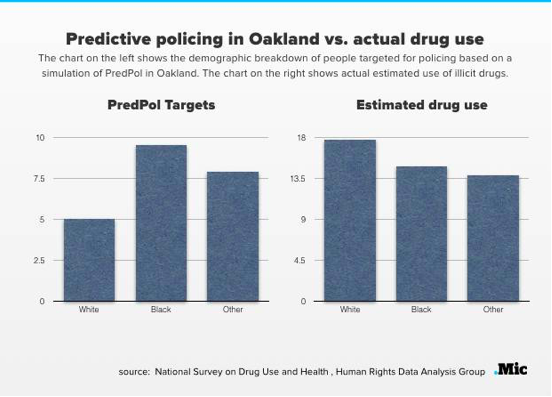 Firstly, certain groups are overrepresented, not because they are higher offenders, but because they are over-targeted : “Crime rates do not account for incarceration rates.” (Hartney, 2006). Predictive policing predicts crime to occur in a particular place, and therefore the police’s resources are concentrated towards arresting crime perpetrators in these areas. Isaac and Lum (2016) indicate that predictive drug policing leads to “increasingly disproportionate policing of historically over-policed communities”. The locations targeted are designated by softwares and algorithms. The focus on certain neighbourhoods, also means that the crimes committed in that specific area come to the police’s attention, rather than in other neighbourhoods (since there is no unlimited police forces : selectivity) : ”Drug crime is everywhere, but police only find it where they’re looking.” (Isaac and Lum 2016). The discriminatory policy is especially aimed at black minority ethnic neighbourhoods : in NYC, “Out of a total of 14846 arrests, 13334 were non-white people“ (NYPD Report) and “US rates are in large part driven by disproportionate minority incarceration (…) African Americans are over six times as likely to be incarcerated as whites; Latinos over twice as likely.” (Hartney, 2006). Unequal reporting then further widens the dichotomy between real crime location and targeted areas : “In a second experiment, Isaac and Lum hypothesised that sending police to neighbourhoods chosen by the algorithm would lead to a jump in reported crime by 20%” (Business Insider, 2016). The method of collection of crime data is therefore also important (especially when it feeds algorithms) : police records or surveying. Police records only capture 45% of crimes (those reported), so perhaps surveying is more reliable (because it ought to include the unreported crimes too). But, there is obviously no perfect method of collecting data, as surveys rely on a reliable sample.

Furthermore, discriminatory policing is coupled to the systematic portrayal of crime by the media. Sveinsson (2008) addresses the importance of narrative analysis and discourse analysis. In the media, crime is attributed to the culture of certain communities. Blaming gun culture on black communities attempts to use culture to explain violent acts (crime as cultural). By culture, one usually associates it to ideas of diversity, identity and ethnicity. Multiculturalism in Britain is thus portrayed as culture clash. It is dangerous to consider culture as a source of explanation in itself, because it reinforces racial theories of differences. Especially when you take the wider risk factors attributed to these groups, one quickly understands that poverty is not a culture, thus the absurdity of the assimilation of crime to specific ethnic minority cultures. Media discourse thus blames crime on ethnic identity. The media is largely guilty because of the way it contributes to the depiction of black minority people, as true perpetrators of violence. Policemen are not immune to these racist preconceptions, leading to over-targeting, and the lesser value of the ethnic minority person’s side of the story. One also ought to look at the definition of crime catered by the elite which act as cultural hegemons (Gramsci).

Criminal statistics show that people of muslim religion, black race, of male gender and of lower class are overrepresented in the criminal justice system and prison populations in particular. Thus, the crucial intersectional approach (Crenshaw, 1990), because it is not men or black people that are overrepresented, but young black men from lower social classes (intersection of race, gender, age and class). Targeted policing also requires intersectionality : “Among those arrested for drug crimes, the proportion who are African-American men has tripled. Although the prevalence of illegal drug use among white men is approximately the same as that among black men, black men are five times as likely to be arrested for a drug offences. As a result, about half the inmates in the United States are African-American” (The Atlantic, 1998).

However, there is no understanding systematic overrepresentation without understanding certain structural risk factors : levels of socio-economic inequality (exclusion from communities and markets), because of different welfare states, ideologies and approaches crime. The Wire, not as genuinely reliable statistical document, but a realistic portrayal of society politics, interestingly shows the parallel between poverty and illegal drug trade.

When we take a closer look at the criminal data statistics, we notice that socio-economically deprived groups are more likely to be perpetrators, but also victims of crime : “New York City and the North Country have very little in common. One thing they do share, however, is a high rate of poverty” (The Atlantic, 1998). Inequality is a strong explanatory factor of over-incarceration : school failure, peer influence, living in poor areas, drug use and joblessness (Webster, 2007). Residential segregation shows that poorer groups tend to be concentrated in areas where the access to public services is worse : schools, infrastructures etc. Spacial inequality (e.g. Zoning Laws) takes us back to targeted policing. The level of inequality is a strong determinant of risk : social and economic exclusion. Economic inequality (Marx), but also social and cultural inequality (differences in social and cultural capital – Bourdieu), produce higher risk groups. Crime becomes an expression of class conflict or a reaction to structural disadvantages. The reproduction of these inequalities (economic, social, cultural) and lack of social mobility (equal opportunities : Sen and Nussbaum) lead to the perpetual overrepresentation of the same groups. Without tackling inequality there is no hope for changes in criminal statistics – there is a need for social justice, as well as economic distribution through progressive taxation (Piketty, 2013). However, inequality is the result of higher structural factors.

Different welfare states lead to different levels of inequality. Esping-Anderson, drawing on Polanyi’s work, explains the emergence of contemporary welfare state. The nature of the mobilisation determines the type of welfare capitalism that emerges : the social democratic︎ regime – highest level of decommodification, egalitarian in aim (e.g. Nordic countries), the conservative/ christian democratic︎ regime – decommodification within existing hierarchical structures: family, community, church, protective but not egalitarian (e.g. Germany, France), and the liberal︎ welfare regime – residual protection from market, safety net (e.g. US, UK). In the US’s highly individualistic and low job protection liberal welfare state, we notice stronger inequality and stronger incarceration rates, whereas in Scandinavian social democratic welfare states, inequality is lower and incarceration rates too. Overrepresentation is different in some countries because some welfare states attempt to prevent crime, by limiting risk factors for those excluded from capitalist markets.

C.  Ideologies (neoliberalism) and approaches to crimes (retributivist vs utilitarian).

The approach to crime also explains the variations in incarceration of high risk groups. Considering crime punishable for the simple fact it’s a crime (retributivist approach), leads to the natural incarceration and overrepresentation of higher risk groups (criminalisation expansion in the US). “Just deserts” justify “fair” punishments proportionate to the seriousness of the crime. The utilitarian approach may lead to lesser overrepresentation, depending on the view of the usefulness of prisons. In Nordic Countries, the educational and reinsertion in society approach, both socially and economically, leads to lesser incarceration rates (and the social democratic welfare state will reduce risk). In the US, the lower income groups, also happen to be immigrants with different ethnic backgrounds (importance of immigration levels). Furthermore, neoliberal laissez-faire economics in the US, suggest the market naturally redistributes wealth fairly. This obviously leaves poorer groups, because they are at higher risk (as discussed before), to be overrepresented.

To conclude, both institutionalised racism (targeted policing and the media), and structural factors (inequality, liberal welfare states, neoliberalism and retributivist approach to crime) explain the overrepresentation of certain groups in some criminal justice systems (multi-causal). Risk factors, however, vary according to the different criminal justice systems in different countries. The actual definition of a crime also depends on the country and time (e.g. criminalising adultery). It is an error to consider the human being as naturally inclined to committing criminal offences – a racist or sexist approach because the is no scientific evidence that men, or black ethnic minorities are naturally criminals. This essay suggests that systematic overrepresentation of certain groups is more structural, a collective fate for ethnic minorities (holistic approach) in individualistic societies, rather than the agency (methodological individualism) or biology of these individuals. More policing is not needed, but provision of good public services, infrastructures and opportunities (inclusionary dynamics).

Crenshaw (1991). Mapping the Margins: Intersectionality, Identity Politics, and Violence against Women of Colour.

Esping-Anderson (1990) The Three Worlds of Welfare Capitalism. Hartney, C. (2006) US Rates of Incarceration : A Global Perspective.