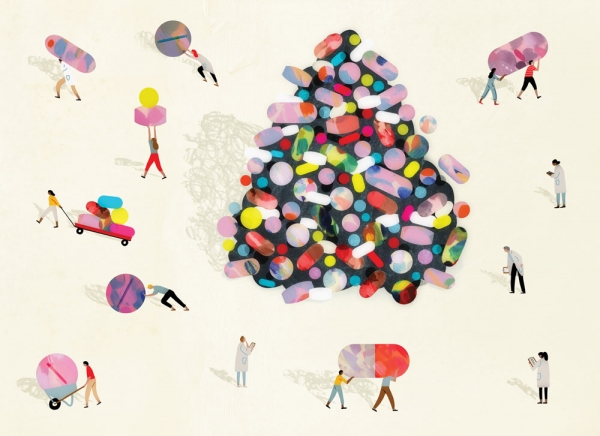 Over the past two decades, the U.S. has experienced a spike in overdose deaths involving opioids. Demographically, the communities that have been affected most severely by this crisis are non-Hispanic Whites from the rural working class – the same demographic that propelled Donald Trump’s 2016 bid for the White House to victory. Much scholarly attention has been devoted to explaining the 2016 election of Donald Trump as U.S. President, but important aspects of the political and social changes underlying his win remain opaque. Empirically, many of the factors that contributed to the surge in support for Trump are captured well by a variety of socioeconomic indicators, such as unemployment and poverty rates. However, there are many politically salient aspects of de-industrialization and social decay – such as perceived social immobility and the loss of a sense of community – that cannot be quantified using these traditional socioeconomic indicators. Interestingly, many of these otherwise elusive determinants of support for Trump are also among the primary causes of opioid addiction, as research into the psychology of addiction has shown (Morgan et al. 2002).

After recognizing the overlap between the causes of opioid addiction and the drivers of support for Donald Trump, our paper investigates the lessons, both empirical and theoretical, that can be drawn from analyzing these two issues in tandem. Specifically, we argue that county-level opioid prescription rates can be used as a proxy measure to quantify some of the more elusive, sociopsychological drivers of support for Donald Trump. To establish empirical support for our theory, we employ multivariable regression analysis to evaluate the relationship between opioid prescription rates and Republican vote share on a county level using prescription data from the Center for Disease Control and Prevention (CDC) and MIT Election Lab data on the 2016 election. Two hypotheses are investigated: (1) the change of opioid prescription rates between 2008 and 2016 and the change in vote share for the Republican Party across the same period are positively associated; and (2) the explanatory power of the regression model is significantly increased by including opioid prescription rates in addition to standard socioeconomic indicators. While Covid-19 has delayed our project significantly, the preliminary results our data analysis are promising, and we hope to build on these results.

The insights of our paper are potentially significant for a number of reasons. Establishing a more powerful and complete model of voting behavior using a better set of indicators than past models is, in itself, important as it furthers our understanding of the causes of the recent populist backlash. Furthermore, the nexus between the opioid crisis and the surge in support for the populist politics of Donald Trump highlights the systemic nature of the causes of each: this directly challenges the dichotomy between economics and culture that is implicit in much of the current debate on populism and draws attention to the complex ways in which culture and economics interact to create political (and medical) problems. Furthermore, the link between opioid addiction and the populist backlash suggests that policies that aim to address addiction by providing people with a sense of community and purpose could be an effective tool with which to also counteract the increasing polarization of Western democracies.