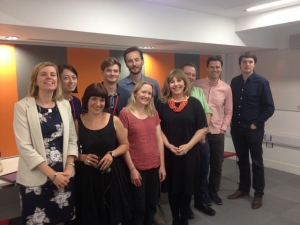 Next week, Thursday 12th November we have Maggie Philbin, CEO of TeenTech and former TV presenter, coming to LSE to give a NetworkED Seminar:  Tea, Tech and Teens at 3pm. We still have a few tickets available for this event, but it is proving extremely popular, so hurry if you wish to attend.

I caught up with Maggie earlier this week at the TeenTech Awards at Buckingham Palace, where the winning student projects got to meet the patron of TeenTech, HRH the Duke of York. I was attended as a sponsor of the Research and Information Literacy Award, which was launched this year to recognise good practice in finding, evaluating and using information to underpin the project. I asked Maggie a few questions ahead of next week’s seminar at LSE.

Jane: Can you tell me a bit about what inspired you to set up TeenTech and why you think it matters?

Maggie: We set up TeenTech back in 2008 because I was aware of a yawning gulf between  companies who were crying out for people with the right skills and a generation who had never had so much access to technology but hadn’t realised they could be building and innovating rather than simply using it. Setting TeenTech up as a collaborative organisation was very important as I’d seen so many initiatives working in silos and unwittingly undermining good work done by others. So TeenTech is all about bringing together companies and organisations who share the same aim of helping young people understand they very much belong in the world of technology and the skills that will help them take advantage of more opportunities. We work with some very brilliant people who make TeenTech very special.

Jane: What are some of the most inspiring products or innovations that young people have developed as part of TeenTech?

Maggie: Young people have a fresh perspective and can be bold thinkers. I try to read as many of the Award submissions personally because they are so exciting. This year students have developed an e-water tap for Africa which will be installed in villages in 2016, a clever device to make cyclists more visible to other road users, a condom which changes colour according to the sexually transmitted disease it comes into contact with. The latter is very much a concept but provoked world-wide interest with over 400 news organisations carrying the story.

However alongside the innovations it’s the stories of teenagers who become engaged with technology for the first time which really hit home. One girl said that working on her project not only made her aware of just how big the world of tech really was but helped her see that ‘technology is all about people’. Many teenagers become ardent ambassadors for tech and mentor teams  – it’s very exciting to see this.

Jane: Was there someone when you were at school who inspired your interest in science and technology?

Maggie: I was interested and curious and enjoyed Science but I found Chemistry difficult. I switched to Arts subjects but never forgot the road not taken. While I was a student I worked as a stage electrician during the holidays and thoroughly enjoyed tinkering with tech. So when I had the opportunity to work on Tomorrow’s World it was like being given a second chance. I feel so lucky to have had that opportunity and really TeenTech is all about distilling the Tomorrow’s World experience for another generation.

Jane: How do you think we can encourage more girls to develop an interest in science and technology?

Maggie: I think this is a very complicated question. My personal view is that we have to help more girls get a real buzz from the subjects. It’s not enough to bleat on about all the opportunities, they have to sense that they belong, that they have skills which would be valued and also that they would enjoy working in these areas. My own daughter who now works in tech says that nothing she experienced at school helped her understand how good she could be and how much she would love working in this arena. We need to address this and make more time for students to lead their own projects, so they can genuinely explore science and technology. We need to make room for mistakes and reward things like tenacity, teamwork and creativity. 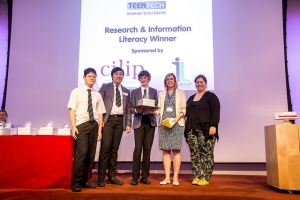 Jane: Why did you decide to launch a Research and Information Literacy award for TeenTech and work with librarians?

Maggie: Reading through the electronic submissions it was very apparent that some schools were much better than others at supporting young people with project work. We felt there was a real need to help them understand how to research their ideas and how to reflect that research – so understanding how to find obscure information and acknowledging sources. The CILIP Information Literacy Group have been brilliant in providing helpful resources which will support students not only with the TeenTech Awards but also with work across the entire curriculum.

Jane: What was your favourite innovation you saw on Tomorrow’s World, perhaps something that never has been developed but you wish would be?

Maggie: Ahh a difficult question. My favourite inventions were always the ones which actually worked!! The most significant inventions I demonstrated were probably the very first digital camera, the first truly mobile phone and satellite navigation. I also did the very first demonstration of virtual reality back in the mid eighties. The internet was demonstrated shortly after I left the show. It was very hard back then to see how all these technologies would collide and transform 21st century life for all of us.

We are really looking forward to catching up with Maggie next week and do book your place at the event or watch the live stream from the LTI blog.