This author has not yet filled in any details.So far Athina Chatzigavriil has created 4 entries.

How to ‘Release’ grades and feedback in Moodle!

It’s this time of the year! Marking is in progress, and you will soon need to Release grades and feedback to students via Moodle!

Don’t forget Marking Workflow is enabled for all Moodle Assignments! You need to Release the grades and feedback for students!

Firstly, the Marking workflow in Moodle is a great feature. It enables teachers to add grades and feedback to student submissions and allow them to ‘Release’ (reveal the grades and feedback) at the same time for all students when they choose to do so.

How to ‘Release’ grades and feedback to students?

Considering Marking workflow is enabled for all newly created Assignments in Moodle (2019/20), you must ‘Release’ the grades and feedback to students. To do so, follow the steps below:

2. Scroll to the bottom of the page and under Options > Assignments per page select All to get all assignments to display on one page.

3. Select the submissions for which you want to use marking workflow using the Select box on the left of each submission – to select all submissions, click the Select all box under Select.

4. Scroll to the bottom of the page and from the drop-down menu With selected… select Set marking workflow state and click Go.

5. On the screen that appears, and from the drop-down menu Marking workflow state, select Released.  You can choose to Notify students by selecting Yes to generate an email. Click Save changes.

6. Students will be able to review their grades and feedback.

N.B. If blind marking is in use with marking workflow, the grades are released regardless of whether student identities have been revealed. However, you and other markers are likely to want to reveal identities at some point. You can find the option to Reveal student identities in the Grading action drop-down menu at the top of the submissions table. You need to have Teacher (Editor) or higher access to do this. 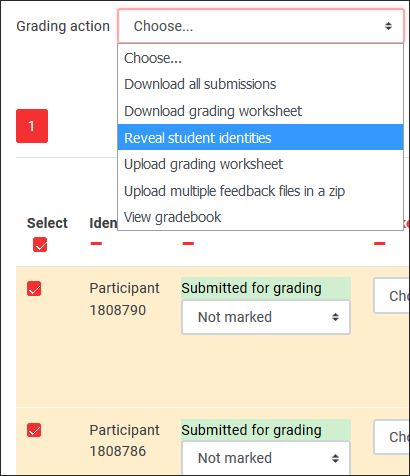 If you experience problems releasing grades and feedback to your students, get in touch with eden.digital@lse.ac.uk

November 27th, 2019|eAssessment News, Moodle|Comments Off on How to ‘Release’ grades and feedback in Moodle!|
Read More

The keynote will be given by Professor Amos Witztum, Department of Management, on ‘Higher Education: what has gone wrong?’. The programme includes 17 parallel sessions organised under the four strands:

The day will close with a debate discussing the relevance of student surveys and the presentation of LSE teaching prize winners at a wine reception.

Book your place and view the full programme and abstracts on www.lse.ac.uk/teachingday/

This year academic staff, students and support staff will lead an exciting programme focused on:

Book your place and view the full programme and abstracts on www.lse.ac.uk/teachingday/

Registration closes on Monday 2 May 2011

CLT sincerely apologise for the Moodle outage which occurred at 0632 on Sunday 30th and continued until 1033 Monday and for the inconvenience caused.

Technical explanation of the problem.

It was believed that the application server did not use the SSL certificate at all.  However, Apache, the web server on the application server, is configured to listen on TCP port 443, which is used for secure web communications.  It therefore requires the certificate, and the server’s private key which was used to sign it, in order to start.  A new private key with the same name as the old one was generated, having renamed the old key to retain as a backup.

On Sunday morning, a maintenance script on the application server restarted Apache so it could create a new weekly logfile and compress the old one.  But since the certificate file and private key did not match, the server could not start.  This caused a complete loss of service until the issue was identified and resolved.