Revisiting the 1973 Arab-Israeli War: Revelations from the U.S. Archives

Revisiting the 1973 Arab-Israeli War: Revelations from the U.S. Archives

This past July, the Office of the Historian was proud to publish the Foreign Relations of the United States (FRUS) volume covering the U.S. response to the October 1973 Arab-Israeli War.  The formal title of the volume, Arab-Israeli Crisis and War, 1973, indicates what we refer to within the Office of the Historian as a crisis volume.  Crisis volumes contain drama unlike other documentary collections, and they offer unique insights into the U.S. policy making process.  In this volume, there are two notable insights on display in the documents.  First, there is the impact of the bureaucracy on the implementation of foreign policy and second, U.S. policymakers’ conception and implementation of grand strategy, especially in the Cold War context.

Compiling a crisis volume is in many respects the equivalent of a movie editor cutting a film.  The film has been shot at various locations such as the White House, the State Department, and in the government offices of a few key officials, while off camera the war is raging in the Sinai and Golan Heights.  The actors have completed their scenes.  Dr. Henry Kissinger has led a cast of many supporting players for this particular story, including but not limited to President Richard Nixon, Soviet Ambassador Anatoly Dobrynin, Israeli Ambassador Simcha Dinitz, Chief of Staff Alexander Haig, Secretary of Defense James Schlesinger, and Central Intelligence Agency chief William Colby.  The various documents collected during numerous research trips to archives and presidential libraries are similar to those completed scenes passed on from a director to a film editor.

At this point in the process, a compiler begins the selection of those documents that best tell the story of the development and implementation of U.S. foreign policy at the highest levels of government during a particular crisis.  In this volume, there are three key story lines that scholars have previously analyzed in the secondary literature.  These storylines very much highlight the two broader insights referred to previously- bureaucracy and strategy.  The U.S. airlift of military supplies to Israel a week into the war illuminates the ways in which the U.S. bureaucracy struggled to efficiently move the military supplies to Israel as well as the administration’s Cold War aims through resupply.  Additionally, there was a notable lack of preparation in the bureaucracy to deal with the oil embargo that began towards the latter part of the war and proved paralyzing for the United States and ultimately, the global economy.  In the third storyline, which focuses on U.N. ceasefire violations followed by an elevation of the U.S. defense condition to DEFON III, the volume demonstrates the culmination of Kissinger and Nixon’s Cold War foreign policy and grand strategy for weaning Arab states from its Soviet benefactor, most notably Egypt.

Fortunately for a compiler of U.S. policy in the Middle East during the second Nixon administration, colorful characters abound in illustrating these story lines and insights, especially the foreign policy team of Henry Kissinger and President Nixon.  From September 1973 to October 1975, Kissinger served as both Secretary of State and the National Security Adviser.  This unprecedented concentration of power in one unelected official’s hands made Dr. Kissinger a focal point in U.S. foreign policy, and therefore, his presence dominates the documentation of FRUS volumes during the Nixon and Ford administrations.

In addition to addressing the personalities involved in a FRUS volume, a compiler must also deal with the context surrounding a crisis so the reader can understand how the crisis arose.  Context is quite a challenge for the compiler as they cannot use traditional narrative techniques such as extensive written background, or in the case of film, a voice over. And the context in the case of the October 1973 War included many complexities, notably domestic politics.

Domestic politics played its largest role in this volume with the Watergate scandal, which had evolved from a modest investigation by eager journalists to a full-fledged congressional inquiry, consuming President Nixon’s time and energy.  Thus, Kissinger maintained tremendous influence in the formulation of U.S. foreign policy during the fall of 1973.  Nixon and his handlers, however, tried to emphasize Nixon’s role during the crisis in an attempt to distract attention from the scandal.  This is most evident in an October 22 cable from Chief of Staff Haig to Kissinger after a successful meeting in Moscow.  Haig warned Kissinger that he “will be returning to an environment of major national crisis.”  On October 20, Nixon had fired Watergate Special Prosecutor Archibald Cox, which precipitated the resignations of Attorney General Elliott Richardson and Deputy Attorney General William Ruckleshaus.  Haig lamented that “the ramifications of the accomplishments in Moscow have been somewhat eclipsed and their true significance underplayed.”  Haig urged Kissinger to help “refocus national attention of the President’s role in the Middle East settlement” as Haig feared the development of an “impeachment stampede” in Congress.  However, he expressed hope that “cooler heads will prevail if the President’s assets are properly applied.” (p. 668)

When one considers this drama surrounding the crisis in addition to the remarkable impact of the October 1973 Arab-Israeli War on geopolitics, it is astonishing how little attention has been paid among historians to this topic.  There are some publications that look at specific areas of this crisis such as the Israeli and U.S. intelligence failure to detect the Egyptian and Syrian attack, the tactical military maneuvers by the combatants as well as other narrowly focused topics.  But few publications center the war and the ensuing oil embargo’s impact on international finance, the long-term effect of the war on the Middle East peace process, and the role of the war in the Cold War context.  Perhaps some of the reason for this dearth of scholarship has been the lack of released documentation.  Hopefully, this volume will play a role in expanding the coverage and depth of this conflict.  At the very least, it can confirm or deny some of the famous controversies associated with the war.

One of the most valued aspects of FRUS volumes, crisis or not, are the ways in which they illuminate these historical controversies.  Although the documentation may not fully resolve questions scholars or the general public have about a particular issue, it typically sheds some light on what happened, as is the case in this volume regarding the U.S. decision to airlift weapons to Israel.  Many rumors have swirled over the years as to whether Kissinger purposely delayed the transfer of weapons to the Israelis with the hope that Israel would become more pliable during post-war negotiations.  Others have suggested that the Defense Department played the key role in delaying the weapons shipments.  Or, could it have just been bureaucratic bungling?

To find out more, read the rest of Adam Howard’s piece (PDF).

Adam Howard, who spoke at LSE last month, is completing a book examining the American labor movement’s role in the development of Israel from the 1920s to the 1950s. He is Chief of the Middle East and Asia division at the U.S. Department of State’s Office of the Historian where he researches and annotates for the Foreign Relations of the United States (FRUS) series. He also teaches history and international affairs at The George Washington University in Washington, D.C.

Fawwaz Traboulsi is coming to London and other upcoming MEC events 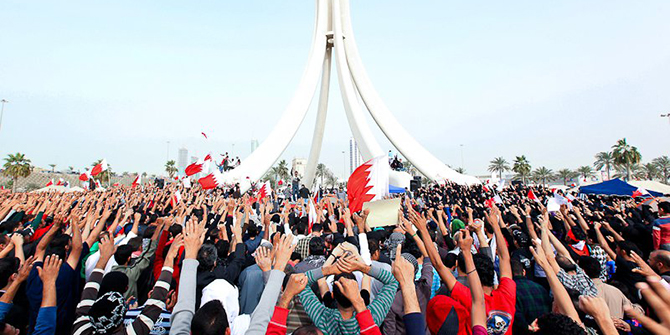