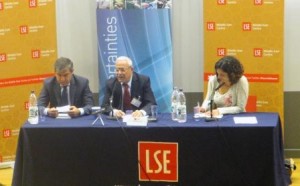 With generous sponsorship from the RCUK’s Global Uncertainties Programme and the Centre for the Study of Democracy at the University of Westminster, the LSE MEC held Inside Syria: 18 Months On, a one-day conference on Syria last week. Throughout the next week or so, we’ll be sharing transcripts and videos of the conference proceedings here. First up is an excerpt from the keynote address of  former Syrian National Council Chairman and Université Sorbonne Novelle’s Professor Burhan Ghalioun. He delivered the speech in Arabic and it was simultaneously translated into English. The full transcript is available here.

Excerpt from “Lessons Learned: Taking Stock of the Opposition Journey”, an address by Professor Burhan Ghalioun

The first lesson after 18 months of the Syrian revolution is that the Syrian regime is not a political regime. It’s not even a nationalistic patriotic regime. . . The Syrian regime came to power through violence. It never sought to integrate or actually have any sort of participatory approach towards its own people, even in a partial way. It never answered to any political standard. Other authorities have to answer their people or have conditions they have to fulfil to get their people happy. It just only focused on having their people submissive and they’ve always done that through violence. It’s only through violence or sometimes they resorted to manipulation. The way they always played and exploited any contradictions that are there in Syria, any fractions that are already there. They always manipulated it to rule.

The violence — when I say that they wanted to make their people submissive only by violence here is what I mean: they wanted people to be culled by fear of their violence, of their different security branches and apparatus, the issue of political imprisonment and arrests that was also used as part of the violence.  Then the fourth issue here is the continuous and everlasting emergency laws that ruled Syrians. These were also accompanied by regulation and laws that exempted the Syrian security and those who were involved in Syrian security from any possible questioning or any possible take putting them credible for what they commit. Actually, they ended up with a situation where the hand of the security services was free completely and the power of suppression was free to do whatever they wanted. And now, when the Syrian regime is using airplanes, tanks and artilleries against its own people in the villages and towns in Syria, it proves the statement that I’ve just made. It’s acting like an occupation force, not as an authority. It’s a regime that’s closed in on itself and has no connection to the constituency it has really. The people on the ground, they don’t even care. The people who are in the Syrian regime, they don’t even really care about actually getting any popular legitimacy.  They just want to force people, cull people by fear and make them submissive by repression.

The second learned lesson after 18 months of the Syrian revolution is how incapable of action the international community or what was referred to generally as international community — organisations that are known to identify the international community such as the UN or the international council in the UN — they are incapable of taking any decision or action to prevent the continuation of what you’re seeing and the massacres. This regime is still getting a lot of political and military support from what are referred to as great nations or great powers as Russia and China. While the Western Bloc has become known as the Friends of Syria Bloc, they  are still hesitant and they lack the initiative or the will to do anything about the bloc of the Syrian people. Five months into the establishment of the Syrian National Council or the SNC, the Syrian National Council has not received any or whatsoever financial support from any state or any country. People were having to finance their own revolution up until that point. By then, we were 11 to 12 months into the revolution and people have to finance their own revolution without any support whatsoever.  We’ve got speeches – we’ve got very supportive speeches, a lot of rhetoric. It’s almost as if these messages of support were illusionary rather than real support and even the Friends of Syria didn’t do any real action that would have stopped the violence against the Syrian people.

The division of the international community, its hesitation and its incapacity of action has actually played a very encouraging role of the continuation of the violence on behalf of the Syrian regime or rather the escalation of violence you’ve seen recently because now the Syrian regime feels like they’re not going be punished. They’re going to get away with all that commitment.  So now, there are different reasons why the international committee and why the different countries have failed to provide any solutions. Some wanted or hang on to the possibility of a political solution. They have illusions about the nature of Assad himself and the possibility of any political solution with him. Some other countries had no interest, no stakes to get involved at all.  Some countries maybe have the desire to go into deeper crisis. There are different motives on why people failed to act, but they have failed to act.

Now, listen. The third lesson, I’m going to talk about the Syrian opposition which is the sort of more attractive subject to talk about, especially for the international diplomacy and international press. The Syrian opposition has to say that it has not brought up its coordination and action to the point where it could represent a real leadership of the revolutionary movement taking place on the ground. Like the international community, they were divided. Some groups of the Syrian opposition have illusions of any possible political solution with such a regime. Other groups though bet on an international intervention which, by the day, we see that it was only a matter of rhetoric. It was never a real possibility represented for Syrians. So what I mentioned to you has prevented this one opposition from reformulating itself, from rebuilding and re-identifying itself actually in a way where it could present a strategic objective, vision into the real issues at hand with the crisis in Syria and it also prevented them from being able to either formulate influence or lead a public opinion.  in Syria in regard to the Syrian revolution that has been continuing for the 18 months now.

Now, take into consideration that there is not a unified opposition that could actually lead the momentum that you’ve seen and the revolutionary movement that you’re seeing on the ground. In the absence also – the second part – in the absence of political initiative – let me state here that Brahimi initiative is not going to have any better fate than that of Annan or any other political initiative that picked the way it was drawn. Also, the third aspect was that in the absence of any international willingness for an intervention that would stop the war, we are at a stalemate and this stalemate can be broken in any one of two ways.  The first would be a change of balance on the ground of the forces on the ground and that would need the kind of weaponry that would support the FSA to be able to face the major issue which is the aircraft. They are being bombed with aircraft. Unless the FSA are being given the kind of weapons that would allow them to face, confront and neutralise the aircraft used against them by the Syrian regime, then we might not see that change of forces. The other thing that would actually be a factor into breaking the stalemate is if the Syrian opposition would be able to surpass its differences and division and to form a temporary government that would a) gain the trust officer and people, b) be a legitimate representative of that and replace the collapsing regime. So only maybe a matter of coordination and cooperation between groups of real friends of Syria, groups of countries that are friendly to Syria that would coordinate and work with three different levels inside the country: a) a better unified opposition, b) a temporary and transitional government, c) a unified FSA temporary government that would allow us a way forward, that would allow us a way of breaking the stalemate and moving forward.

Professor Burhan Ghalioun is the former chairman of the Syrian National Council, a university professor at Université Sorbonne Nouvelle, and a long time Syrian opposition activist. Based in France since the 1970s, Ghalioun was among Syrian opposition figures abroad who signed the Damascus Declaration for National Democratic Change in 2005. He served as chairman of the Syrian National Transitional Council in August 2011 until he resigned this May. He continues to work within the SNC.

Bad Behavior has blocked 2078 access attempts in the last 7 days.