This piece originally appeared in RUSI Analysis on 30 July 2013.

It could be argued that for the Shia of Iraq – who have consolidated power after decades, if not centuries of oppression – the Syrian conflict has transformed itself from one simply about realpolitik or a battle for the region to a battle for the very survival of the Shia.

Syria is now a regional sectarian war; a war that is no longer just about the Syrian people or the Assad regime but the survival of the Shia and its ascendancy over the past ten years. It is toward Iraq’s involvement in the conflict that we must look to understand and appreciate the sectarian dynamics of the war, a country whose role in propping up the Assad regime has fallen under the shadow of its more powerful neighbour and ally, Iran.

A powerful Shia minister in Iraq recently sent a chilling warning to Syria’s rebel fighters: attacks on the Shia in Syria or Shia religious shrines will be met with the arrival of thousands of Iraqi Shia fighters. The message made explicit reference to the success of Hezbollah in Qusayr, the strategic town that fell to regime hands last month, thanks to the Shia Lebanese group’s intervention. ‘If 300 Lebanese Hezbollah fighters changed the equation in Syria, Iraqi young men will go to Syria to change it a hundred times over,’ the minister warned.

Hadi al-Amiri is Iraq’s Transport Minister. More significantly, he is the founder and head of the Badr Brigade, a feared organisation formed in the 1980s in Iran that commands thousands of Shia fighters and who played an active and decisive role in crushing Iraq’s Sunni during the country’s bloody sectarian war in 2006 and 2007.

Al-Amiri’s comments come off the back of Iraq’s continued acquiescence to Iraqi Shia militias entering Syria and joining the ranks of the regime to suppress the rebel opposition.[1] They warrant particular attention for two reasons. Firstly, because it was the first time a senior Iraqi official directly and publicly threatened to send Shia fighters into Syria. Secondly, and more broadly, al-Amiri’s comments are telling of Iraq’s contribution to the Syria conflict and how the rise of the Shia in Iraq over the past ten years has radically transformed the Iraqi state, the region and Iraq’s role in the region.[2]

The rise of the Shia was predicted long before the Syria conflict began. Writing on the Shia revival in 2006, three years after Iraq was liberated from the shackles of dictatorship, Vali Nasr predicted that the ‘character of the region will be decided in the crucible of Shia revival and the Sunni response to it.'[3] Two years earlier, in 2004, King Abdullah of Jordan coined a phrase that reverberated throughout the world. Abdullah warned of the dangers of a ‘Shia crescent’ stretching from Damascus to Tehran, passing through Baghdad.

However, when both assertions were made, the definition of the Iraqi state was still unclear. Iraq was still undergoing a post-conflict transitional phase and it was unclear whether Iraq would come to be ruled predominantly by a Shia alliance.

Regionally, these assertions were made when it was difficult to identify the existence of a Shia crescent. The Middle East contains a diverse Shia population that cuts across ethnic, social, tribal and political boundaries. Syria’s ruling Allawite, an offshoot of Shia Islam, is considered heretic by most Shias. Further, after the Iraq war, Syria provided a safe haven for terrorist groups, who were given passage into Iraq by the Assad regime with the aim of destabilising the country and keeping American attention away from Syria. In 2009, relations between the Shia-dominated government in Baghdad and the Assad regime then reached a low ebb, after Iraq’s Prime Minister Maliki blamed Assad for a series of bomb blasts and continued terrorist atrocities in Iraq.

The past decade has, therefore, put King Abdullah’s theory and Iraq’s involvement in the Shia axis in the region, comprised also of Iran and Syria, to the test. Ten years on, the state of Iraq’s domestic politics, the advent of the Syrian uprising and Iraq’s regional role have combined together to transform Abdullah’s Shia crescent into a reality.

Domestically, a quote from one Iraqi Shia after the overthrow of the Ba’ath regime in 2003 was telling of the new climate: ‘We are the first Arab state to be controlled by the Shia since the Fatimids ran Egypt 800 years ago.’ His words were soon reflected in reality. Millions of Shias had poured onto the streets of the south in mid-2003 after the toppling of Saddam Hussein. The occasion: the celebration of a Shia religious event, historically banned under former Iraqi regimes. The objective: the assertion of Shia identity and a message signaling the new order of things in the new Iraq. In their millions, the Shia called for the leadership of the Ayatollahs and the clerical establishment.[4]

A few years later, the Sunni-Shia civil war of 2006 and 2007 paved the way for Baghdad’s transformation into an overwhelmingly Shia city. The government, army, police and judiciary came under Shia control, while Shia symbolism dominated ministries, streets, state institutions and security checkpoints.

Iraq does not constitutionally proclaim itself a Shia republic. It has a diverse, pluralistic population and within those communities the Iraqi national identity remains strong, despite the divisions of the past and despite competing visions of what this identity means.[5] The country’s array of ethno-sectarian groups are also represented in government; nor does Iraq have an Islamic or theocratic system akin to Iran’s.

Further, Iraq’s main Shia parties have fought bloody battles against one another. They differ fundamentally over issues like federalism and power-sharing; the role of Islam in politics and the legitimacy of the Vilayat-e-Faqih doctrine (the rule of the jurist) that underpins Iran’s system of Islamic rule.

But all that is rendered less significant for two principal reasons: the collective mobilisation of the Shia in Iraq and the Shia identity’s capacity today to cut across political, social and religious boundaries.

Religion and politics have become intertwined. Firstly, because of the influence Iraq’s Shia clerics have over the political climate. Shia clerical or religious figures and institutions have played an influential role in politicising the Shia identity, maintaining the importance and significance of the Shia identity and allowing it, therefore, to cut across different boundaries of everyday life.

This was exemplified no less by Ayatollah Sistani’s intervention in 2005, when a Shia coalition was established in his home for the national elections. The intention on the part of the Ayatollah was aimed at stability and the prevention of conflict according to sources in Najaf. The consequence, however, was the centralisation of the Shia voice and the polarisation of Iraqi society, even if this was not the Grand Ayatollah’s intention., who has previously called for unity between Iraq’s different communities.

Secondly, religion and politics have become intertwined because of the strong links Iraq’s Shia ruling parties have with the clerical establishment and its theological seminaries. Some, if not all, of the ruling parties like the Islamic Da’wa Party of Prime Minister Maliki, the Sadrist movement of Muqtada al-Sadr and the Islamic Supreme Council of Iraq (ISCI) find their origins in the holy shrine cities of the south.

The Shia identity has, therefore, become a galvanising force, a rallying point for the Shia population. The boundary between Iraq being a Shia state and a Shia dominated state is no longer all that clear.

Regionally, in emerging to rule and dominate the post-2003 Iraq, the Shias of Iraq have re-defined the entire region by complementing the 1979 Iranian revolution that brought Iran’s Shia clerics into power. The 1979 revolution re-oriented the geopolitics of the region. However, geopolitically, post-revolution Iran was unable to live up to its potential. In Iraq, Saddam prevented the revolution from being exported to his borders by suppressing the Shia and by exploiting the ethnic divide between Arabs and Persians, which he did with great effect during the Iran-Iraq war.

The removal of Saddam in 2003 and the rise of Shia Arabs in Iraq not only created the space for the assertion of the Shia identity but it has, more importantly, bridged this ethnic divide, reinforcing, consequently, Abdullah’s concept of a Shia crescent and the idea of a pan-regional Shia identity relevant to different segments of the region’s heterogeneous Shia population.

It is against this backdrop that Iraq has come to define the conflict in Syria. In Syria, it is the ascendancy and relevance of the Shia identity that is being fought for, and which Iraq’s ruling elite and its clerical establishment depend on for survival. Despite their internal differences, Iraq’s Shia are largely unified in supporting the Assad regime and remain indifferent to Iraqi Shia militias joining the regime’s ranks. The removal of Assad would also undermine their authority by emboldening Iraq’s anti-government militants and empowering the country’s Sunni, who have become disenfranchised with the rule of the Shia.

The cause also resonates with the broader Iraqi Shia population, who fear that reversing the ascendancy of the Shia equates with a return to marginalisation and oppression. Sunni groups in Iraq, since 2003, and Syria, since the uprising began, have done little to convince them that this is merely a far-fetched fear.

For the Assad regime, survival now depends on sustaining the sectarian dimensions of the conflict and the coalescing of its core supporters, the Allawites, around the notion that their survival is intertwined with the survival of the regime. Owing to both domestic and regional factors, that is now taking place. Politics and identity have thus become inseparable. Against this backdrop, any support the Assad regime receives from Sunni or non-Shia communities is rendered symbolic and tokenistic.

The involvement of outside powers like Iran and the Arab world has been an underlying factor in sectarianising the conflict and it is questionable that, but for their involvement, the conflict would have transformed from a popular democratic uprising into a sectarian civil war. But the Syria conflict has been transformed. And it has transformed into a conflict that is no longer simply about realpolitik or a battle for the region but a battle for the survival of the Shia.

Ranj Alaaldin is a Doctoral Candidate at the London School of Economics and Political Science, where he researches the history of Shia political mobilisation in Iraq. He is also a Senior Analyst at the Next Century Foundation.

[2] For more on Shia politics and influence, see The Shia Revival by Vali Nasr 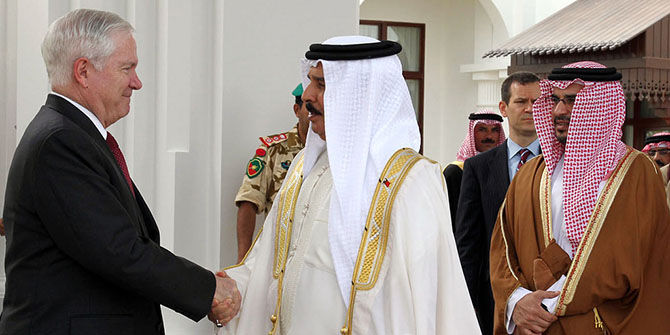 Bad Behavior has blocked 3356 access attempts in the last 7 days.