Capital in the Arab World (AW), viewed in its dimension of consuming and allocating resources, has edged close to a mercantilist mode of accumulation whose principal characteristic is the near absence of positive intermediation between private and public wealth – literally it leaves behind the progressive side of capitalism. The merchant mode of accumulation revolves around quick private gains and does not require productive reinvestment in society; the usurpation of value by financial means is a subsidiary outcome. The practice of merchant capital mimics that of financial capital, in the sense that money is transmuted into money without much involvement in production processes: M-M’. Rentier or rent-grab maybe too general a categorisation; it is also something of a misnomer, meant to support an ad hominem (and faux-nationalist) argument which conceals the fact that value transfers away from the working classes in the AW are conducted by national as well as by US-led international financial capital. The resurrected merchant mode of accumulation is a reincarnation of medieval mercantilism in a modern guise and, as was pointed out quite early in the industrial age, ‘wherever merchant capital still predominates we find backward conditions,’ (Marx, vol. III, p. 327).[i] The degeneration in social and political rights, including the status of women, is a vivid manifestation of the social retrogression driven by the ebbing of industrial culture in much of the AW. The broader context from which this condemnation stems is as follows:

A qualification is in order to allow for the juxtaposition. Save slavery, imperialist aggression, and colonial genocide, the evolution from the merchant mode as Venetian traders began to control and own upstream cottage-scale or small manufacturing undertakings represented progress and a turning point in the organisation of social production around wage labour (Engels, 1891).[ii]  Integrating the merchant mode with an industrial one designated a cultural step forward— culture here meaning the universal store of humanity’s knowledge. The AW has de-industrialised under the combined effects of war and neoliberalism. What has occurred in the AW is the gradual disengagement of national industrial capital from commercial capital, after which commerce bereft of industrialisation became the dominant mode. Value usurpation policies, inherently uneven development, blocking the homogenisation of labour, and value grab by imperialist conquest are some of the processes that have underpinned the resurrection of merchant capital in this instance. Here I am relying on Meszaros’ notion that capital as a social relationship regulates its metabolic rate of reproduction in relation to value destruction/grab and value creation, albeit within a context of class struggle and its associated power structure (Meszaros, 1995).[iii] The case can be generalised in the sense that the security-exposed states of Africa and the AW fall on the “destruction/grab” side of capital as a historical process, and dividedness becomes the defining feature of the their historical subjects, that is, the class alliance of merchants with US-led capital that shape their history. Another distinction/qualification arises between a comprador class and a dominant class that commandeers merchant-capital processes. Whereas a nationalist bourgeoisie differs from a comprador class according to whether the sphere of accumulation and its money-circuit are nationally or internationally linked respectively, the merchant-capital leading class is more fully fused with international financial capital because its concrete activities are inclined to short-term investment wherein the costs of plant removal are also negligible. The merchant class wealth is mostly held in dollars, so it becomes one with US-led capital in the dollar – aptly called the universal form. It is not just that the rate of imports is nearly at half of income in the AW; merchant capital obeys its international financial counterpart in many areas. Apart from buying abroad and selling at home, its principal endeavours at home are in the speculative areas of a FIRE economy (finance, investment and real estate). The merchant class has little to lose from forfeiting its production base in the home economy. It taps into national resources (national assets and foreign exchange earnings) by speculation, devalorisation of national assets, and the sale of imports to the national economy. This merchant class does not contribute in any significant way to the development of national working classes. These merchant-capital leading classes are either detached from the process of industry within or exhibit an ephemeral link to it.

The pressures of imperialist hegemony and the instilling of the merchant mode have together reinforced the downward (de-)development spiral. Apart from losing major wars that restructured society, there was a prevalence of geopolitical rents from the Gulf states that contributed to de-industrialising more advanced economies, such as Syria and Egypt.  The AW thus became an economy that could not for structural reasons produce jobs, and where profits without effort had gripped the ruling-class mindset. In this context, cheapening life and reducing people to commodities became part of the shift to the merchant mode and the value usurpation process. For the Arab working class, this is a process that religious alienation—imaginary projection of the causation of worldly misery onto a supernatural power—can only momentarily redeem. As working people endure harsher conditions, it appears that the Islamisation of political life offers a short-lived reprieve to the merchant ruling class. However, in the absence of a socialising alternative (land reform, protectionism and egalitarian distribution) toward which popular movements can strive, political uprisings need not imply progress.

Alongside imperialist bellicosity, the merchant mode of accumulation obstructs integrative transformation, both nationally and regionally. It supplants the basis for a social contract. Mal-distribution and the near-absence of positive intermediation between private and public wealth remove the welfare base for working class autonomy and, hence, national integration as well. Under the merchant mode, the private sphere develops a necrotrophic relationship with the social sphere.

Another qualification is in order as well because some industrial economies behave as mercantilist. Present-day exporting industrial superpowers such as Germany are dubbed ‘mercantilist’ in the sense that they often exhibit a trade surplus. But the AW is not and has never been as industrial as Germany.  German mercantilism, or Chinese for that matter, is the commerce of industry selling its products and accumulating a trade surplus consistently over time. The Arab merchant mode is principally about taking raw or semi-raw products out of the nation states and selling them abroad and or importing manufactured goods for sale at home. Alongside chattel slavery, nationalisms laced with racism, and colonial genocide, it was European mercantilists who engaged wage labour in industry and  introduced technology and a complex division of labour. In this way they initiated the wealth-making process of capitalism circa 1500 AD. Mercantilists, under the global pressure of rising trade volumes, engaged wage labour in industry to meet the demands of the world market. In the AW, however, de-industrialisation, regime stabilisation spending derived from oil or geopolitical revenues, and the rise of informal or low-productivity service activity laid the foundation for the new material basis of social relationships. The subjugation of national capital to norms of financial capital, whose activity is centred on money exchange, also accelerates and shortens the duration of the turnover of profits in the national economy. Where Arab industrial and merchant capital did remain tied to each other, that is where industry survived as the leading mode, the space for their joint activities to produce and sell at home or abroad accounted for a puny portion of total income under neoliberalism. Arab share of high-technology exports from total manufactured exports in the Arab World is at around one to two percentage points, below the rank of sub-Saharan Africa—including South Africa, which is around 5 percent (WDI, various years). In any case, if one excludes the very small Gulf population from total Arab population, Arabs would compose 5 percent of world population earning around one percent of world income. This is not very different from the Sub-Saharan share of income. International financial capital, by hindering the homogenisation of labour (the bridging of wage gaps) and by value grab by imperialist conquest, assisted the ascent of merchant capital in the AW. Capital, to be sure, did not forfeit its absolute general law of development. When the Africa and the AW are considered as an integrated part of the planet the heights of prosperity meet the depth of dislocation.

Imperialist hegemony and the merchant mode are interrelated; they reinforce each other. However, imperialist assault is the underlying historical moment around which all other moments coalesce. The merchant mode of accumulation sets in motion anti-integrationist dynamics. It splinters. If a scale of reference serves to illustrate the point, it divides according to the magnitude of merchant capital subordination to US-led financial capital. Furthermore, the merchant mode requires little expansion in productive capacity or synchronisation of human skills with expanding technology. Merchant capital can easily foment a civil war in the nation state to further the interests of its dominant international partner.

The conventional wisdom posits that oil and geopolitical revenues in the Arab World are unearned incomes. That is a fallacious and misleading claim. These incomes are earned at tremendous social and environmental costs to the working classes; capital accumulation begins with the bombardment of the ex-colonies and human losses in war and the demobilisation of resources are incurred by society as a whole. The reified nation state confounds oppressor with oppressed. The joint loot of the Arab ruling classes and their international financial patrons is unearned income; however, the rest the Arabs—the street vendors, the unemployed, the poverty-and-war–stricken populations—have more than earned their share.

As the merchant mode governs social activity, oil and geopolitical revenues are mainly spent on increasing imports, domestic pacification, and foreign assets. These measures address US-led imperialist objectives that thrive on the pauperisation and disempowerment of Arab working classes. A disempowered working class imparts its insecurity at the national level and boosts imperialist hegemony. In the integrated web of global production, national boundaries can no longer disguise the fact that capital draws on a huge pool of global resources. The idleness of Arab resources is closely tied to the central crisis of overproduction. Deductively, wealth is humanity’s wealth and, conversely, working class de-integration in the AW is the heavy price paid for the unearned income of their ruling-class alliance. More important, the re-empowerment of Arab working classes could dent the hegemony of the US alliance over a region in which they enjoy ‘the freedom of action — notably military action — that is almost unparalleled globally’ (Levy, 2103).[iv]

Dr Ali Kadri is a Senior Research Fellow at the National University of Singapore’s Middle East Institute. Kadri was visiting fellow in LSE’s Department of International Development and head of the Economic Analysis Section at the United Nations regional office for Western Asia. He is curently conducting research on the political economy of development in the Arab World.

[iv] Daniel Levy, Maximum Bibi, Peace in the Middle East? Not if Benjamin Netanyahu has anything to say about it. Foreign Policy,  2013. 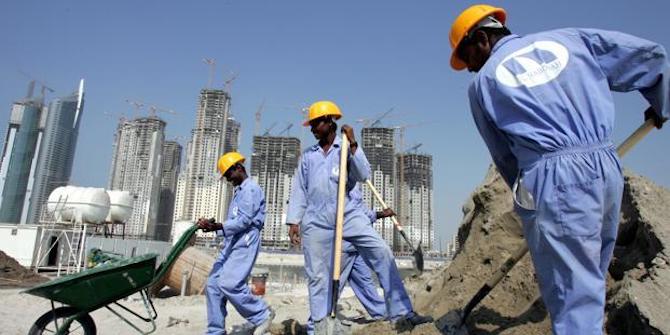 Bad Behavior has blocked 1079 access attempts in the last 7 days.