In Yemen, alliances are primarily driven by pragmatic interests of power politics, rather than ideological convergences: the enduring multi-layered conflict has enhanced this trend.

Since January 2015, two factions have been fighting for power in Yemen: the army, predominantly supported by Sunni tribes and the Houthis, backed by segments of the army still loyal to former president Ali Abdullah Saleh. In March 2015 on, the Arab Sunni coalition led by Saudi Arabia started its military intervention to ‘restore legitimate institutions’ (starting airstrikes, followed by ground forces too). Iran is the main external sponsor of the Houthis, seeking to empower local insurgency along Saudi’s borders.

Yemen’s domestic crisis has since been entrapped in the ‘Middle Eastern Cold War’ between Saudi Arabia and Iran, fostered by the current Gulf’s power transition, which is allowing Tehran to regain leverage in the region. Such a geopolitical framework complicates the prospects of a Yemeni conflict resolution. However, the alliances’ flexible pragmatism could leave room for political bargaining between tribes and external patrons. Alliance patterns are influenced by endogenous and exogenous dynamics: Middle Eastern states tend to balance perceived threats and rely on Yemeni non-state actors to exert power in the domestic arena. Thus, when something changes within the alliance system, the entire set of alliances can be modified.

For decades, Saudi Arabia supported Saleh’s neo-patrimonial regime (in spite of his Shi’a faith), with direct payments to central authorities and local tribes through transnational patronage channels. In authoritarian systems, as the Yemeni one, national security is regime security, since the regime’s survival lies at the top in the hierarchy of priorities. Riding a condition of permanent budget insecurity, Yemen’s political scene has always been deeply penetrated by external powers hoping to achieve or expand regional leverage. However, the Yemeni power system has proved resilient vis-à-vis exogenous pressures for change: Saleh used to divert American foreign policy resources (financial, military and diplomatic) from the war on terror against Al-Qaeda towards the fight against internal opponents, enhancing his dysfunctional regime.

The General People’s Congress (GPC), Saleh’s political umbrella, and Ansarullah, the Houthis’ political and military movement, are now strange allies. Between 2004 and 2010, Saleh fought six battles against the Zaydi Shi’a revivalists in their northern fiefdom of Saada, so provoking remarkable waves of anger towards central institutions. As the Houthis, Saleh is a Zaydi Shi’a, but he never framed his presidency through confessional narratives. In the Yemeni case, the sectarian element has not to be overstated, since power relations are fundamentally shaped by inter-tribal bargaining that often transcends the Sunni-Shi’a cleavage.

Notwithstanding past animosity, the ‘marriage of convenience’ between the GPC and Ansarullah is now taking place: both aim to undermine the transitional balance of power headed by interim president Abd Rabu Mansour Hadi (former Vice President) and the Islah party, which encompasses local Muslim Brothers and Salafis. The GPC opposed Hadi’s attempts of security sector reform and Ansarullah has always rejected the suggested federal reform: Saleh’s loyalists were side-lined from security forces’ upper ranks in order to strengthen Hadi’s presidency and Houthi main lands were supposedly clustered in the macro-region of Azal. This brand new region would have few natural resources, high population density and no access to the sea.

Because of the GPC-Ansarullah alignment, the former President has now become Saudi Arabia’s enemy: Riyadh sustains transitional institutions, labelling the Houthis as Iranian proxies. Notwithstanding the past alliance with the United States, loyalists of the former president have been looking towards Russia for support, trying to replicate the Shi’a-Russian axis in Syria and Iraq. In June, a GPC delegation fled to Moscow; a few weeks ago, Ali Abdullah Saleh was at the Russian embassy in Sana’a to express his condolences after the downing of the Russian aircraft by Turkey. This has spread rumours about the Houthis’ attempt to acquire weapons and ballistic missiles from Russia in order to intensify their warfare operations on the Saudi border. Iran, on the other hand, has been mainly supporting Ansarullah and the Houthis, but Tehran’s outreach also regards the Southern Movement (Al-Hiraak A=al-Janoubi) in spite of the confessional divide, with an eye to the traditional lands of Saudi hegemony and to the Bab-el-Mandeb energy choke-point.

Due to the Houthis’ showdown, Saudi Arabia has recalibrated its Yemeni alliances: under King Salman’s rule, the first foreign policy objective has become the indirect confrontation with Tehran on a regional basis, as the execution of the Saudi Shi’a cleric Nimr Al-Nimr has reaffirmed. This is why Riyadh recomposed in 2014-15 the intra-Sunni rift with Qatar to fully support the Islah party and its powerful Muslim Brothers’ wing, which enjoys wide support within Sunni tribes. This helped Saudi-led military intervention to counterbalance the Houthis’ southern penetration, even though the stalemate on the ground continues. The tactical shift risks to open a future political gap with the United Arab Emirates, very committed in the Yemeni war: Abu Dhabi is the most hard-liner amongst GCC states vis-à-vis the Ikhwan issue.

Informal alignments are predominantly against ‘someone’ or ‘something’: Hadi’s front (as the Shi’a faction) doesn’t have a shared project on what the future Yemen should look like. The current president and the Islah party would keep the power and continue with the transition process. The Southern Movement and many local tribes, such as the Hadhrami, seek autonomy and/or secession from Sana’a, while Jihadi militias reject the secular vision envisaged by many southern secessionists. As a result, this anti-Huthi galaxy is not able to rule together, as confirmed by Aden’s rising security vacuum. Only Saudis and Iranians can now try to solve a conflict initially generated by domestic grievances: this is the main paradox of the Yemeni war.

Eleonora Ardemagni is an International Relations analyst specialised in the Middle East. She is also a Gulf analyst for the NATO Defense College Foundation and a commentator at Radio Vaticana. 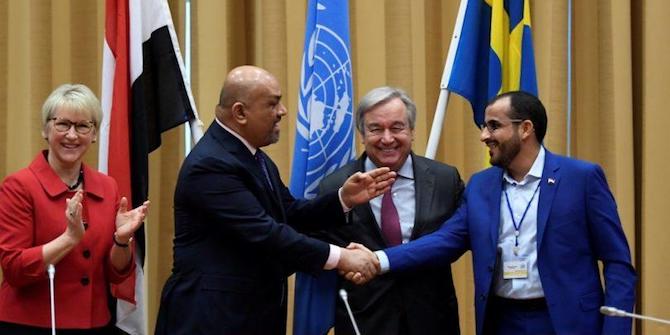