Muhammad ibn Salman visited Washington several times with a view to making himself known in Washington and promoting himself at the expense of his cousin Muhammad ibn Nayef, who had already maintained close contacts with the US intelligence and defence community as a result of his involvement in War on Terror efforts since 9/11. Immediately after Donald Trump was elected US president in November 2016, the young prince rushed to court him, promising greater Saudi investment in the US economy and more weapon purchases, both pledges welcomed by Trump. During his election campaign, the latter frequently declared that the US would not continue to support its traditional partners in Europe, Asia and the Middle East without all of them committing greater financial resources to cement the military partnerships that the US had helped to forge since World War II. He did not hesitate to describe Gulf countries, including Saudi Arabia, as void of everything except money. Trump’s repeated attempts to ban Muslims from travelling to the US and his anti-Muslim rhetoric did not detract from the new opportunities that both he and Muhammad ibn Salman anticipated to inaugurate a new era of close cooperation between their two countries. It seemed that both leaders were determined to go back to the status quo ante – before the election of Barack Obama – when Saudi Arabia and the US had enjoyed a close and unchallenged partnership.

A short-lived period of troubled relations with the US occurred during Barack Obama’s presidency. The relationship reached a nadir as Obama declined to indulge Saudi Arabia and accede to its constant requests to bomb its archenemy, Iran, or topple Bashar al-Assad of Syria. The Saudis made the first request in 2008 and the second after the outbreak of the Syrian uprising in 2011. Saudi Arabia considered the Iran Nuclear Deal that Obama and several European leaders signed in 2013 a potent threat, signalling that the US was determined to end four decades of Iranian isolation and diversify its interlocutors in the Middle East after having relied on Saudi Arabia, Turkey, Egypt, the Gulf and Israel as its main partners in the region. Despite this, under the Obama administration the US sold more than $115 billion of arms to Saudi Arabia.

While Trump did not fully acquiesce to the Saudi requests regarding Iran and Syria, he made enough vague noises to endear the Saudi leadership and restore the troubled relations to their pre-Obama harmony. Trump’s anti-Iranian rhetoric that he immediately ramped up once elected, his repeated threats to reconsider and perhaps abandon the Nuclear Deal, his willingness to impose new sanctions on Iran, and his description of Iran as a terrorist state pleased the Saudis and paved the way for his historic visit to Riyadh. On Syria, immediately after he became president, Trump authorised limited airstrikes that barely affected the balance of power against al-Assad. Nevertheless, such a hasty move was positive signal enough for Riyadh to think that Trump was on their side and would pursue regime change in Syria.

On 20 May 2017 Trump arrived in Riyadh accompanied by a large entourage of family advisors, consultants and businessmen. He was welcomed with great fanfare and pomp. The Saudis offered Trump much-needed rehabilitation not only inside Saudi Arabia but across the Muslim world. Muhammad ibn Salman assembled over fifty Muslim leaders for a Muslim summit and gave the President the opportunity to address them in a historic speech. This speech was meant to counter Obama’s famous Cairo speech in 2009 when he emphasised the US’ commitment to democracy and human rights in the world and its respect for Islam as a religion. Obama called on history to show that Islam is an integral part of America by drawing on his mixed parentage, especially his Muslim Kenyan father. In contrast Trump announced in Riyadh that:

We signed historic agreements with the Kingdom that will invest almost $400 billion in our two countries and create many thousands of jobs in America and Saudi Arabia. It should increasingly become one of the great global centers of commerce and opportunity. This region should not be a place from which refugees flee, but to which newcomers flock.

While Muhammad ibn Salman was pleased that Trump emphasised economic ties, he was more eager to hear Trump’s denunciation of Iran, so he must have been thrilled when he heard Trump pointing to Iran’s disruptive role in the region:

For decades, Iran has fuelled the fires of sectarian conflict and terror. It is a government that speaks openly of mass murder, vowing the destruction of Israel, death to America, and ruin for many leaders and nations in this room […] Until the Iranian regime is willing to be a partner for peace, all nations of conscience must work together to isolate Iran, deny it funding for terrorism, and pray for the day when the Iranian people have the just and righteous government they deserve.

Saudi Arabia urgently wanted Trump to absolve it from any responsibility for the deadliest crisis to have befallen the Arab world, namely terroristic sectarian conflict. There was no mention of how, like Iran, Saudi Arabia resorted to sectarianism as a counter-revolutionary force to derail the 2011 Arab uprisings in Bahrain, Syria and most recently in Yemen. Its religious ideology, known as Wahhabism, has appeared indistinguishable from that adopted by the Islamic State (IS), with the latter incorporating Saudi religious texts into the Raqqa school curriculum and enforcing a social and sectarian policy very similar to that practised in Saudi Arabia. Sex segregation, anti-Shiʿa rhetoric and beheading point to a common ideological affinity between the religious ideology of IS and Wahhabism.

Furthermore, Trump refrained from mentioning the role played by Saudi Arabia in spreading this radical version of Islam around the globe. The Saudi role had been criticised since 9/11, but Trump absolved the Kingdom from any responsibility for the expansion of a global jihadi trend that it had initially promoted together with several Western governments, notably during the Reagan and Thatcher years in the 1980s as an antidote to Soviet Communism and the occupation of Afghanistan. The promotion of Saudi Wahhabism was a project conceived during the Cold War, during which the country was elevated to the status of global player in the Muslim world, but it was specifically useful in Afghanistan when it was expected to contribute ideologically, financially and personally to the country’s liberation from Soviet occupation. Trump was not interested in a deeper understanding of the roots of the global jihadi menace, which would implicate both the US and Saudi Arabia in addition to many partners in both the West and the Muslim world. Both Muhammad ibn Salman and Donald Trump felt comfortable turning the page and sinking into historical amnesia. From now on, the Saudi­–US relation is set to reinstate itself as a pragmatic marriage of convenience, void of any ideological underpinnings, such as concerns over human rights, democracy or any other terminology that makes Riyadh uncomfortable. Vague incremental social and political reform rather than military intervention or promotion of democracy is Riyadh’s preferred option.

It is important to understand how the two leaders managed to strike an alliance, though it may well prove to be momentary, set as it is against a background of tension and animosity. Like Muhammad ibn Salman, Trump is unpredictable and the two men may fall out over minor differences in the future. However, they will keep the facade of agreement on main issues and maintain a traditional, albeit revived bargain: the Americans shall continue to offer unconditional and unequivocal support to Saudi Arabia while the latter continues to pay for the privilege of remaining the main US ally after Israel in the region. This bargain had until recently appeared shaken and perhaps lacking in enthusiasm on the American side. However, Trump and ibn Salman share a common belief that ‘money talks’, hence their common outlook is based on the assumption that in both business and politics only this cherished currency has the potential to solve almost all problems, from terrorism to failing economies. Both have no deeper understanding of the current challenges of the Arab world, a disdain for any ‘deep thinking’ and an insatiable appetite for public relations companies, lobbyists and the pomp that comes with sudden acquisition of power. So far, the two leaders appear to be in lockstep at least over a number of key issues from Syria to Yemen, but deep down the administration around Trump does not seem to share his overt enthusiasm for Saudi regional policies. In Yemen, Syria and Qatar, the three hot spots in 2017, both the Pentagon and the US State Department tempered Trump’s hasty announcements, thus indicating that contradictions exist within his administration, parts of which are prepared to force climb downs from the president, at least with regards to brash announcements like those he made when visiting Riyadh, where his comments were understood at the time to fully endorse Muhammad ibn Salman’s regional wars and interventionist policies.

However, while ibn Salman may have won over Trump, he still faces uncertain votes in the House of Representatives and the Senate. In the past, American presidents with clear majorities were able to get both houses to approve important arm sales to Saudi Arabia. But since 9/11, the legislature’s unequivocal support could no longer be taken for granted.

Having alienated the Saudis when he called them ‘free riders’ in his famous Atlantic interview, Obama tried to mend the relationship in his last months in office. In September 2016, both the House of Representatives and the Senate overwhelmingly rejected his bid to veto the Justice Against Sponsors of Terrorism Act (JASTA), which allows family members of 9/11 victims to sue Saudi Arabia in American courts. This law may prove a serious obstacle to US–Saudi relations.

Tension between the American president, this time Donald Trump, and Congress resurfaced in 2017 over arm sales to Saudi Arabia. Immediately after Trump’s return from Riyadh, he narrowly escaped the Senate’s veto on a $500 million deal to sell Saudi Arabia precision-guided munitions. With Saudi Arabia’s erratic airstrikes killing many civilians in Yemen and the conflict reaching a stalemate almost three years after it started, opposition to arms sales will no doubt continue to grow in the US.

Trump wants to capture a historical moment in which Saudi Arabia is set to transition to a bright neoliberal economy open to global trade, accompanied by a minimalist welfare state weaned off oil. Privatisation, diversification and Saudisation are the backbone of Muhammad ibn Salman’s Vision 2030 – an economic blueprint to deliver economic prosperity at times of falling oil prices and budget deficits. The expansion of the private sector and most importantly the announced partial privatisation of the Saudi oil company ARAMCO offer new economic opportunities that both leaders want to promote and benefit from. Should the national interest of the US coincide with that of Muhammad ibn Salman, the two leaders hope to closely cooperate in the future. However, both leaders can be erratic and capable of making ad hoc decisions that may backfire. 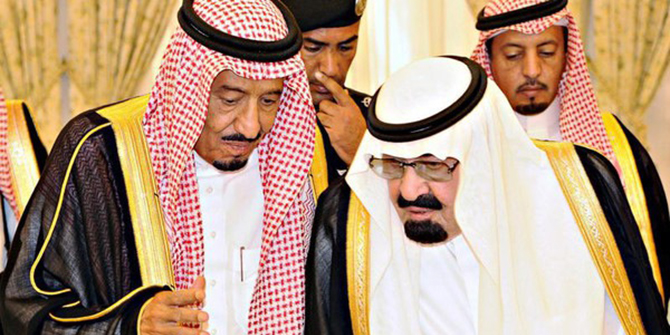 Bad Behavior has blocked 2498 access attempts in the last 7 days.