Following the defeat of the Islamic State in Iraq, it is now possible, indeed desirable, to put forward a number of scenarios regarding the future of the Popular Mobilisation Forces (PMF), especially since the various factions have grouped themselves and entered the political arena under the umbrella of the Fatah Alliance. As one PMF leader told me, ‘today’s PMF military leaders are the politicians in the next government’.

Others have expressed the view that the PMF ‘is here to stay. It possesses the means to influence political decisions and will remain an armed force on the one hand, and a political movement on the other, as well as a pillar of the country’s national security.’ However, the PMF will, in all likelihood, face several challenges at the political level, starting with rival alliances who fear a power grab by Fatah, particularly its PMF leadership, should they be part of the formation of the next government.

The Legal Status of the PMF

The PMF is a multi-denominational and multi-ethnic organisation. It is a politically and militarily diverse armed paramilitary group, predominantly formed of Shi’a fighters who responded to the fatwa of al-Jihad al-Kifaie, in addition to various Sunni factions and minority Christians and Yazidis from northern Iraq.

The number of PMF fighters is estimated at about 120,000 volunteers, paid by the Iraqi Ministry of Finance through the PMF Commission (or Hay’at al-Hashd al-Shaabi).

Through a series of executive orders and enactments, culminating with a resolution passed by Parliament on 26 November 2016, the PMF was formally recognised as a legitimate institution of state, finally bringing an end to the debate around its legitimacy. It thus became ‘an independent military formation and part of the Iraqi armed forces, linked to the Commander-in-Chief, and consisting of a command structure, military staff, regiments and combat brigades’. The passing of the PMF law came days after the launch of the ‘historic settlement’ accord aimed at reconciling the various Iraqi factions, rectifying the political process, and easing sectarian tensions between Sunni and Shi’a communities at the time.

The Fate of the PMF

The fate of the PMF factions, and how to assert influence over these disparate and often antagonistic paramilitary groups are vexing questions for Prime Minister Haider al-Abadi. In this context, several scenarios have been put forward for the future of the PMF, the most prominent of which are: to fully integrate into the Iraqi Security Forces (ISF), demobilising and reinstating volunteers into their old jobs or providing alternative employment, maintaining the PMF as a reserve force, and fully disbanding the PMF.

The declared number of fighters in the PMF (120,000) is in all likelihood inaccurate, if not greatly exaggerated, and includes undesirable elements and non-existent ‘ghost soldiers’. Therefore, a carefully balanced and politically sensitive strategy overseen by the PMF Directorate, in conjunction with the Prime Minister’s Office, the Ministry of Defence (MoD) and the Ministry of Interior (MoI) for the vetting of all existing PMF members, identifying and removing of criminal elements, isolating any sectarian or unruly components of the PMF (possibly by imposing a law similar to the way militias were tackled in 2008), is predicted to reduce numbers to a much more manageable 80,000.

The primary strategy will see the integration of around 50,000 PMF volunteers into the ISF, to meet the operational requirements of the MoD and the MoI over the next three years. This way, they will receive formal training, become entitled to a state pension and thus become more disposed to transferring their loyalty away from their ‘sponsors’ (particularly those elements of the PMF that are closely aligned with Iran, who constitute around half of the total force) and back to the state. This will resonate well with Iraq’s Western allies, who believe these ‘special groups’ will continue to pose a threat to Iraq’s security and Coalition interests.

A potentially effective strategy for winning back loyalty is by exploiting intra-PMF rivalries, as it allows for the moderate elements to be split off and isolated from the more extreme ones.

Another medium-term strategy will see the return of PMF volunteers excess back to their original posts or to civilian life (particularly the veterans). It may be possible to coordinate with Ayatollah al-Sistani to proclaim that the volunteers are no longer necessary, and that the original fatwa has been satisfied. The combination of governmental and religious authority instructing the PMF to disband should ensure that the non-aligned fighters are retired in a respectful and orderly manner.

A potentially potent incentive for certain elements of the PMF to disband is demonstrated by one faction, which is likely to retain its influence and strength even if the PMF is disbanded, and that is the Badr Organisation. It is the only faction within the PMF that has played a meaningful role in government. It is the most pragmatic of the groups that enjoy strong relations with Iran; and the US has an existing relationship with its leader Hadi al-Ameri (previously minister of transport) and the current interior minister.

Badr’s example has encouraged others to play a political role. More than 20 factions of the PMF joined the Fatah Alliance election list in the 2018 elections. Inevitably, their entry has had a significant impact on the Iraqi political scene for two reasons: first, because of the immense power they wield, and secondly, due to their popularity on the ground.

A combination of the aforementioned strategies could see PMF numbers capped at 80,000, with around 50,000 integrated into the ISF, and the remaining 30,000 being demobilised back into civilian life.

Addressing the future of the PMF requires both short-term and long-term approaches. With the military campaign against ISIS winding down, the deployment of PMF units in liberated territories needs to be addressed in parallel with longer-term efforts to reduce the overall size of the organisation. The Iraqi government needs to undertake these efforts with the support of religious authorities and the international community. Effectively communicating these actions and policies is critical as public support will be essential in seeing through these changes. Given that the future of the PMF is highly politicised, it is necessary for the prime minister to be both decisive and inclusive when addressing it. Support will come if there is buy-in from the general public, so it is important to convince them that these measures are in line with their own interests and the interests of Iraq’s national security.

*This blogpost introduces the LSE research project Iraq’s Popular Mobilisation Forces: The Possibility for Disarmament, Demobilisation and Reintegration by Hayder Al-Khafaji, examining the ability of the Government of Iraq to control the PMF and to realise its goal of integrating this group into Iraq’s mainstream security forces as well as its command and control structures. This project forms part of the Conflict Research Programme, funded by the UK Department for International Development to provide research and policy advice on how the risk and impact of violent conflict might be more effectively reduced through development and governance interventions. 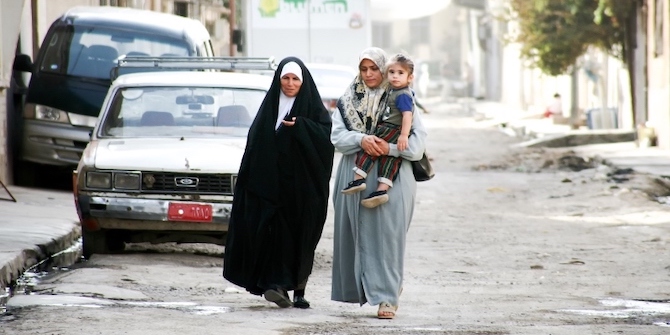 The Bishop and the Prime Minister: Mediating Conflict in the Nineveh Plains 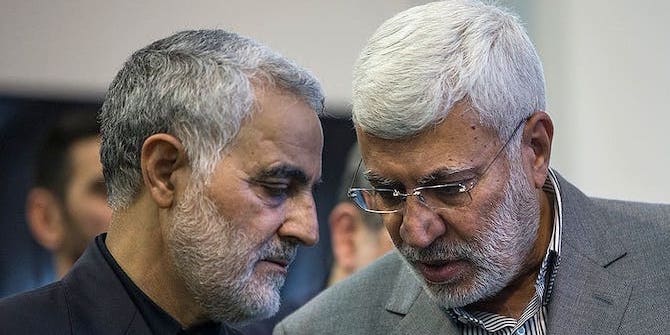