As of 9 May 2018 President Donald Trump announced that the US would pull out of the Joint Comprehensive Plan of Action (JCPOA), better known as the Iran Nuclear Deal. With foreign policy hawks like Michael Pompeo brought in as Secretary of State earlier this year, the US is signalling a much more recalcitrant foreign policy approach to the Islamic Republic of Iran. These actions only serve to play into the hands of the more hard-line elements of the Iranian regime and ignore the rationale the regime deploys to argue for the necessity of Iran’s internal and independent nuclear development.

In the domestic context the Iranian regime has worked to carefully link nuclear development to the survival of its Islamic republicanism through “nuclear nationalism”. This is by no means a phenomenon unique to Iran – its genesis can be found at the beginning of the cold war. In the USSR scientists focused upon developing nuclear reactors for civilian use, arguing that nuclear power represented the realisation of the aims of the Bolshevik revolution. Nuclear power offered a greater standard of living for all and fed into the height of the Cold War competition with the West in the 1950s and 1960s. Everyday commodities from dishwashers to jeans were utilised as weapons in the propaganda war.

In 1963, British Prime Minister Harold Wilson delivered a speech in which he alluded to nuclear development and scientific research (the “White heat of technology”) as constituting a revolution from which a new better Britain would be born. Consistent with this, Britain’s first nuclear reactor was opened by another national symbol, Queen Elizabeth II. Nuclear nationalism might therefore be defined as the deployment of key national symbols, consistent with the political narratives dominant in the state at that time, to justify the development of nuclear technologies.

Iran’s nuclear nationalism could be argued to be the result of its perception of itself as an exceptional state – a people who have resisted cultural, linguistic and ethnic assimilation since the time of the Rashidun caliphate. Just as Shi’ism resisted Sunni domination, the Iranian national consciousness resisted American imperialism through the twentieth century. In this narrative the Revolution of 1979 represents the assertion of Iranians’ control over their own destiny, and an opportunity to promote their own conception of modernity.

While the regime’s nuclear posture is certainly aggressive, Iran is most likely not pursuing the development of a nuclear program for primarily military purposes. This is in part because Iran has developed a strong non-nuclear defence system, with an arsenal that includes missiles designed to carry conventional warheads. While there is debate in Iran around pursuing weaponisation of the nuclear programme, the international backlash has been judged by those across the political spectrum to be too great. The only faction of the Iranian political elite who support weaponisation are the “principalists” – a loose grouping within the conservatives and far right. They advocate for the literal translation of the Quran and Hadith, and unequivocally support the concept of velayat-e faqih, rule by the most learned of Islamic Scholars. They have been bolstered by a whole generation of Iranians whose outlook was shaped by the Iran-Iraq war, and who are resentful of western inaction after Iraq’s use of chemical weapons. However, looking beyond the political factionalism in Iran one might judge the regime’s behaviour the result of a strategy designed to exert maximum pressure in the context of the negotiations, known as nuclear hedging. It seeks to master the nuclear fuel cycle with a view to the future, and to avoid becoming too dependent on oil revenue and improve Iran’s dismal economic outlook.

Weaponisation would therefore run completely counter to this goal, though undoubtedly the regime seeks to maintain a high level of latency to preserve a breakout time of no more than 9–12 months. This allows a degree of flexibility in responding to geopolitical circumstances and fits with the strategy of nuclear hedging.

The biggest obstacle for the original negotiations – and now in the wake of the US withdrawal – consists of two parts. The first is the lack of any trust, the second is a more elusive, somewhat enigmatic stumbling block which owes to the “clash of civilisations” discourse of US neoconservatives. This helps to drive massive arms sales under the guise of securitisation needs. Conversely, the lack of trust on the Iranian side means any agreement requiring enrichment to take place in another state, with the end-product then transported to Iran, contradicts the Islamic Republic’s nuclear nationalism. It is further severely hampered by fears that the deal would be subject to conditions later laid down by the US or others based on separate issues, such as the missile program or Iran’s proxy networks in Lebanon, Iraq and Syria. Simultaneously, any action taken by Iran towards any enrichment or nuclear development tends to be interpreted as malevolent. Iran today is not the Iran of 1979; Khomeini famously claimed the Revolution was not over the price of watermelons and yet with a languishing economy these types of concerns are exactly what cause anxiety amongst ordinary Iranians. Part of the strategy of dealing with Iran should be to see it as a state transitioning from the Shah’s military modernism under the guise of Zoroastrian monarchism – propped up by western interests – to a national-religious institutionalised Islam reliant upon traditionalist power structures. The latter is intent upon binding the nation to a program of enforced development outside of the western conception of modernisation.

Ultimately, the Islamic Republic of Iran is a state caught between the machinations of the religious and political elite and the historically liberal, secular and progressive intellectual heritage of the people of Iran. The regime has tethered nuclear progress and economic prosperity to its own survival and success. Economic incentives may soften their nuclear ambitions though this is not conclusive. Instead of barking “regime change” and foregoing diplomatic engagement which only feeds the narrative of a society under siege, the West should look to constructive confidence building measures to thaw their isolation.

Cameron Griffiths is a graduate of the University of Stirling with a degree in History. He recently completed an Msc in International Conflict and Cooperation, with a focus on the Middle East and negotiations analysis. He now works in Rome as a teaching assistant with an elementary school. 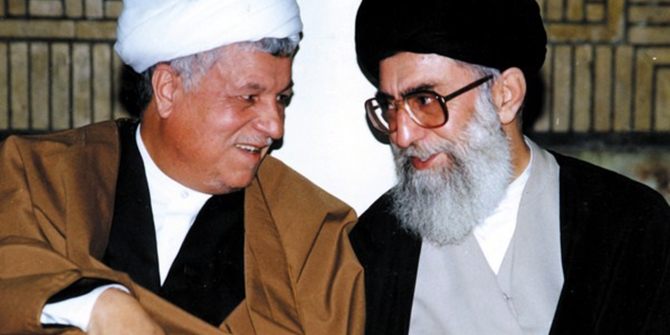