A game theoretical approach can explain the post-civil war equilibrium in Lebanon and describe what has triggered the revolution. It can also show the potential to bring about a welfare-enhancing political and social equilibrium in the country.

The post-war equilibrium in Lebanon was established through the Taif Agreement in 1989. This drew to an end a 15-year civil war through establishing a power-sharing system among the battling sects. Parliamentary seats, like every public post or asset, were divided equally between Christians and Muslims, and proportionately between the denominations of each sect. The division among sectarian lines in governance has led to a clientelist, more corrupt, and less autonomous public sector, one preoccupied by predatory rentier practices. This equilibrium also made Lebanon the third most indebted country in the world and one of the most unequal, as Figure 1 below illustrates.

The equilibrium includes all prevalent social, economic, legal, sectarian and political norms that govern interactions between all individuals and institutions in the country.

The Prisoner’s Dilemma and Coordination Failures: Explaining the Equilibrium

Why did the Lebanese people end up with an equilibrium that is destructive for them? To answer this question, we can use the principle of the Nash Equilibrium. For simplicity, corruption has been highlighted as the main feature of the equilibrium described above.

Nash Equilibria can help us understand how a coordination failure in a non-cooperative game can lead to welfare-damaging outcomes. The most famous illustration is the prisoner’s dilemma: a simplified behavioural scenario where two bank robbers (the players) are being interrogated in separate cells. Each player has a decision to follow:

Nash Equilibrium is an outcome where no player can benefit from ‘unilateral deviation’ in strategy if the other’s player strategy remains unchanged. Here both players decide to follow their ‘dominant strategy’ and rat each other out, instead of trusting each other and remaining silent. The prisoner’s dilemma is an example of a collective action problem and can help us understand how decisions that are good from the individual’s viewpoint can be bad for the collective.

The tragedy of the commons, another example, can explain why we overfish the seas and why we emit too much carbon into the atmosphere. It can also help us in explaining an equilibrium of corruption. We know that individuals, including in Lebanon, would benefit from corruption being eradicated, but since trusting others to abstain from paying (or taking) bribes is not possible, there is no incentive to act honestly.

For a very long time, the power-sharing system in Lebanon has made corruption a dominant strategy for most and given them little to no incentive for ‘unilateral deviation’ to more honest behaviour. Just like two prisoners in interrogation rooms, the Lebanese body politic has failed to cooperate and is thus stuck in an equilibrium that has bankrupted the country, polluted the drinking water, and deprived the population of basic human, economic and civic rights.

The revolution and its role in destabilising the equilibrium

There are many factors that have pushed the Lebanese people to demand the fall of the current system, but the most important, and most obvious, is the growing social cost of the current equilibrium.

Macro-level studies support the argument that there exists a high social cost of corruption, and show it is consistently correlated with lower rates of growth, economic equality, GDP per capita and levels of human development (Figure 2). In fact, Farida and Ahmadi-Esfahani (2008) find that corruption has reduced Lebanon’s standards of living, investment, and human capital productivity. In monetary terms, the cost of confessional governance is estimated to be at 9 percent of GDP each year, which translates to roughly $4.5 billion. In terms of per-capita estimates the cost is around $750 per citizen per year.

With many people recognising the dilemma in which they live, and deciding to unite in the streets and cooperate, the equilibrium can now be said to be unstable. Nonetheless, a complete change of the system and eradication of corruption will require more and more people to coordinate based on mutual trust.

Is it possible to move to a better and stable equilibrium where corruption is not the norm?

When analysing the sequence of a repeated game of the prisoner’s dilemma, Bicchieri and Rovelli (1995) created a condition where in equilibrium, corruption is a norm. They show that there is a critical time in which a stable equilibrium of corruption suddenly becomes unstable. The system can enter a phase in which the expected payoff for the cooperative honest strategy has overtaken the expected payoff for the corrupt strategy. This induces an increase in the number of players that choose the honest strategy, which in turn reinforces the advantage of cooperative behaviour until a new and better equilibrium is established. The writers call this the honest revolution.

This analysis, though very theoretical, can be applied to Lebanon in a sense that the revolution can be that critical time that triggers a mass change in behaviour. What is simply needed for it to succeed is for more and more people to cooperate, thereby making it costlier for those who do not.

As we have seen, in order to make sure that this current equilibrium is changed to an improved one, Lebanon must overcome its collective action problem. The literature tells us that there are some strategies that those who are now protesting should consider employing to overcome this problem. These include:

To change Lebanon’s post-civil war system, one must start at the micro-level. A necessary and sustainable change will only originate from a transformation in the day-to-day behaviour of individuals.  People must now be willing to trust each other to execute a new strategy that renders the pay-off for being sectarian, corrupt, sexist, or a tax evader less than that of being honest or a believer in equal rights. That’s when a new stable and welfare enhancing equilibrium can be attained, leaving behind all the woes of the current equilibrium and of the civil war.

It’s also important for the protestors to realize that there exist a proportion of society that will oppose a change in the status quo. According to the Scitovsky criterion, for any change to increase welfare, the losers must not be able to bribe the gainers to oppose the change. Bribery can take several shapes in Lebanon, with its least dangerous form being money.

Moussa Saab is a Policy Economist in the IGC London Hub and is the thematic lead for State, with a focus on tax. He is a former Private Equity Associate at the Gerson Lehrman Group (GLG).  Moussa holds an MSc in Economics and International Financial Economics from Warwick University and a BA in Economics from the American University of Beirut (AUB). 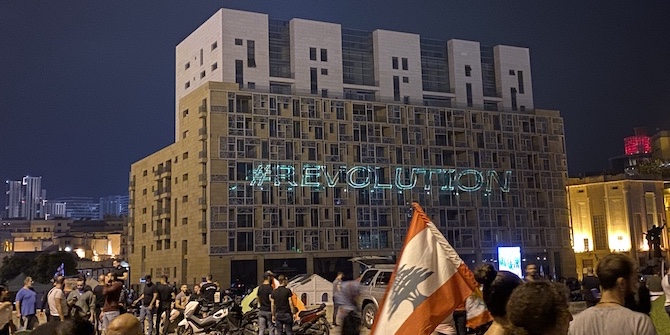 Bad Behavior has blocked 1305 access attempts in the last 7 days.