On 14 October 2021, Lebanon experienced a day reminiscent of the 1975–90 civil war. The country, which is still dealing with severe socio-economic and political challenges, went through renewed armed clashes, when a group of militants sniped and killed seven civilians. While six of the murdered were men who had gathered to protest the probe of the Beirut blast, a woman was also killed at home while waiting for her children to arrive from school. The Shia political parties Hezbollah and the Amal Movement, who had arranged the protest, have accused (indirectly with the Lebanese President) the Lebanese Forces and their head Samir Geagea of plotting the incident and murdering the seven civilians. In response, Geagea denied the allegations and claimed that sniping was used as a form of self-defense.

While some analysts focused on logistical and strategic questions to investigate the snipping incident and its political implications, this piece offers a different framing, highlighting the relevance and impact of existing structural gaps that are rooted in Lebanon’s reconciliation process, post-civil war. It identifies the pitfalls of the reconciliation process and explains how its development in the early 90s involved deferring and masking the political and social tensions between different sects instead of addressing their grievances. This includes those who were with and against Palestinian military presence in Lebanon.

Literature on civil wars states that reconciliation not only indicates the end of such conflicts but is also necessary to achieving sustainable peace. Conflicting parties usually attempt to reduce tensions and reach a peaceful outcome through the initiation of a reconciliation and social integration process. This non-linear procedure can take multiple forms. However, its commonly based around the inevitability of truth, justice, and reparation. Reconciliation’s core principle is to make contesting parties feel emotionally and physically secure enough to engage with each other and to accept different perspectives. For example, in Rwanda, they established the Gacaca courts, which is a communal system of conflict resolution, reconciliation, and justice administration that addressed the grievances of victims and ensured a form of justice and reparations was served. Many other countries that have gone through civil wars have adopted similar institutional mechanisms that maintain these essential components of reparation. Lebanon, however, did not.

The ‘Taif Agreement’ or the ‘National Reconciliation Accord’ that marked the end of the 15 year-long internal war failed to establish a successful reconciliation process. The accord masked grievances instead of addressing them, disregarded the pursuit of justice, and has been aggravating corruption instead of pushing for reparations. While some sincerely wanted to end the bloodshed, many of those involved in drafting the accord wanted their military victory to translate into clear political and institutional power. Others find it necessary to reach a solution to the political turmoil in order to rehabilitate the country and adequately integrate it into the current world order, which remains relatively dominated by the United States, and in which Middle Eastern countries are increasingly pushed to make peace with Israel.

The accord disregarded the various communities’ needs for transformative emotional and physical healing, which are a prerequisite to building the conditions necessary for meaningful reconciliation. Rather than working to restore the social fabric to ensure effective state-building and sustainable peace, the accord focused on ‘non-violent’ power distribution. Indeed, its stipulations heavily focused on outlining changes to the political system, rather than reconciliation. For instance, this is reflected in its failure to address the fears of Christian communities who felt threatened and defeated following the war. This failure led to the conceptualisation of ‘Christian frustration’ (al-E’hbat Al-Masehi), which was adopted by Christian politicians over the past decade to politically mobilise their constituencies.

This begs the question: if the Taif Agreement did not truly address national reconciliation, how has Lebanon succeeded in avoiding a civil war, throughout the past 31 years? The answer has different layers to it. Primarily, avoiding an internal war does not require reconciliation, it only requires a specific form of ‘coexistence’. Indeed, ruling political elites as well as different national accords have regularly stressed the importance of ‘coexistence’, known as al-A’ish al-Mushtarak (العيش المشترك), which perhaps helped reduce the threat of a civil war. However, they never addressed reconciliation, which has more transformative potential to improve communal relations and develop a more unified national identity. Why has the current form of ‘coexistence’ not been sufficiently questioned? The past couple of decades have shown how fragile such a system can be when political tensions arise. Historical experiences such as the assassination of ex-Prime Minister Rafiq Hariri, the withdrawal of Syrian troops from Lebanon, the polarised political environment marked by a wave of political assassinations of public figures, the Israeli invasion and war in 2006, and the intrastate armed conflict in May 2008, all reveal how political tensions can put the Lebanese system under real threat and trigger episodes of heightened violence. Yet, the country has never been on the verge of civil war as much as is the case today. Even the worst internal military crisis since the 1975–90 civil war was short-lived in May 2008, and did not result in civil conflict. Why?

Lebanese ‘coexistence’ post-civil war can be attributed to two major variables. Firstly, the redistribution of political power among the de facto victors of the war increased (a form of) political stability, instead of fuelling the political tensions that usually aggravate social divisions. Secondly, the country’s fraudulent business model rewarded the ruling elite and a significant share of the population -to an extent that maintained ‘coexistence’. Political elites and communities feared the economic and financial losses they would incur if an internal conflict re-emerged. However, the rise of new political actors such as Hezbollah and the Free Patriotic Movement disturbed the post-civil war power-sharing system. Additionally, the 2019–20 financial collapse undermined the country’s economic model, giving rise to further political tensions.

What can be taken as a lesson from the last 31 years is that coexistence may prevent war to some extent, but will never contribute to building a solid, cohesive country. So long as reconciliation is not addressed, Lebanon will always be prone to social divisions, political instability, and the threat of internal armed conflict.

Mapping the Depreciation of the Syrian Lira April 1st, 2021 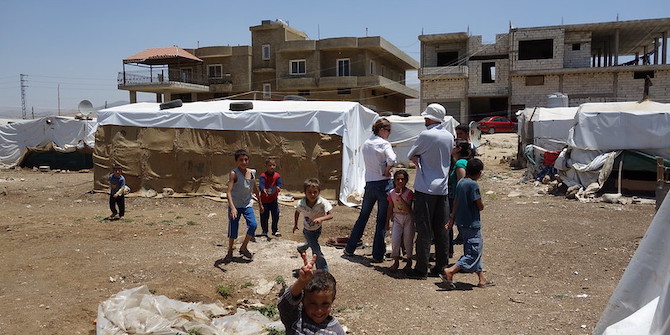 Bad Behavior has blocked 2159 access attempts in the last 7 days.