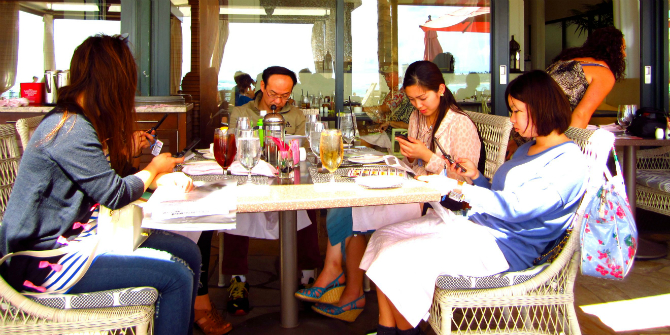 Wendy M. Grossman reviews Sherry Turkle’s most recent book, Reclaiming conversation: The power of talk in a digital age. Wendy explores how human connection has changed and how families must negotiate how they allow technology to disrupt their lives. She writes about the border wars between cyberspace and real life. She is the 2013 winner of the Enigma Award and she has released a number of books, articles, and music. [Header image credit: Peggy, CC BY 2.0]

Last year’s six-person Christmas dinner included two phones and a tablet. The tablet and one phone bore active real-time connections to Game of War, in which, if I’ve understood correctly, pausing can kill you. (‘Interact constantly with your alliance’, a tutorial advises.) So the players poked at their screens, ate and chatted, mostly without looking up. The players were in their mid-30s, and could as easily be parents ignoring their children as children ignoring their parents.

We should pay more conscious attention to each other.

This is one of the key suggestions of Sherry Turkle’s most recent book, Reclaiming conversation: The power of talk in a digital age.

Turkle was called in by a school concerned by a lack of empathy among its teenage students. After interviews with the teachers and the children, Turkle could trace it to the habitual use of asynchronous messaging that allows us to avoid the human reactions to our words.

In one example, a teenage boy stopped cancelling dinner with his grandparents when his parents made a rule that he had to phone them rather than use email. Faced with listening to the hurt in his grandparents’ voices, the cancellations stopped.

Turkle measures the cost of our attraction to our devices in terms of human connection. Constant sips of communication do not add up to a full gulp of messy, emotional, sometimes boring, intimate conversation. Just as we all think we’re above-average drivers, we all think we’re better at multitasking than we are. “Wait … what?” is the often-heard cry of our distracted times. We are expected not to mind when our friends tune out.

Reclaiming conversation is the fourth in a series of books studying the impact of digital communication on human development. The second self: Computers and the human spirit (1984) covered the first wave of personal computers; Life on the screen: Identity in the age of the internet (1995) worried about a generation of alienated young males as internet usage began to spread; and Alone together: Why we expect more from technology and less from each other (2011) saw each of us in a bubble, divorced from the world around us.

This latest instalment is more hopeful. Where, in 2011, Turkle’s interviewees preferred lower-risk, predictable interactions with gadgets and robots over dealing with people, in 2015, she finds children who wish their parents would stop Googling and talk to them. And she thinks we should do as they ask. She, herself, as she frequently reminds audiences, loves technology – but in its place.

Most of the book is divided into four primary sections called ‘chairs’, after Henry David Thoreau. These are solitude, pairs, society (education and work), and the ‘end of forgetting’ (privacy and surveillance). The conversation Turkle wishes we would all reclaim, therefore, isn’t just talk; it’s the ability to be alone with our thoughts, to be comfortable in silence, and to be unafraid of being bored.

The book has been greeted with a mixture of admiration for Turkle’s scholarship, and some uncertainty about her thesis. In the New York Times, for example, Jonathan Franzen points out that designing interfaces to discourage remaining connected, as Turkle suggests, would undermine the business models of most of Silicon Valley’s biggest companies. Franzen goes on to suggest that Turkle is reminding a now-disappearing middle class of the human potential we used to value. He writes:

It’s not Turkle’s fault that her book can be read as a handbook for the privileged.

In an interview with Lauren Cassani Davis at The Atlantic, Turkle cites a Pew study in which 89% of (American) respondents (98% of younger people) had their phones out during their last social interaction, and although they framed that use in positive ways (sharing information, looking something up), 82% thought that the practice harmed the interaction, for at least some of the time.

Turkle’s research found elaborate teen social codes that dictate how many people have to be looking at the speaker (three), and how many minutes you have to wait (seven) before you can check your phone over a social lunch. By contrast, when today’s bookish 60-somethings were teens, it was never acceptable to haul out a book and start reading. But, as Franzen might have asked, what percentage of the population would have been so tempted, had the technology been available then?

At the Boston Review, Claude Fischer strongly disputes Turkle’s thesis. Despite admitting that he has only read her promotional op-ed, he still asks a fair question:

Isn’t this the same complaint we heard about television 40 years ago? Well … yes, and go back a bit further, and my mother deeply resented a breakfast table where everyone was reading a section of the newspaper.

The difference here is that among Turkle’s interviewees it’s the most eager adopters, the younger generation, who are the most frustrated by being confined to shallow topics that can withstand interruptions and partial attention. This isn’t just a case of a nostalgic adults disapproving of ‘kids today’.

Turkle’s interviewees don’t know how to break out of this pattern. Her suggestion is to carve out ‘sacred spaces’ so we can relearn how to be alone and with each other. And yet, a member of the ‘precariat’ doesn’t have the same latitude to ignore their phone for a few hours as a chaired professor – being able to escape your surroundings means something different when your life is restricted.

How and where technology is allowed to disrupt is something every family must negotiate in its own way. 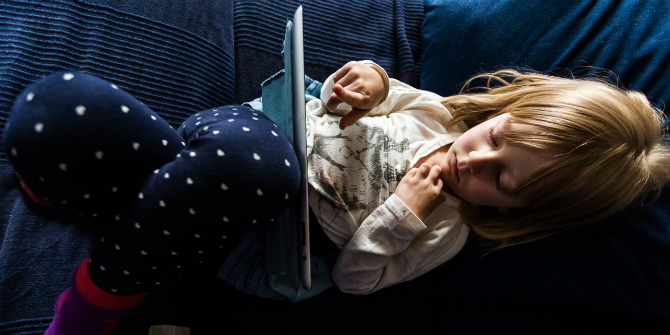