“How many of you have heard of a CDS?”

A smattering of hands shot up into the air when Bloomberg News’ Economics Editor Linda Yueh asked who knew what a credit default swap was at the POLIS International Journalism Conference .

Accurately defining technical jargon in layman’s terms is one of the principle challenges facing financial journalists in explaining the economic crisis of recent years, said Yueh.

Home foreclosures, job losses, and the Eurozone crisis have made financial journalism acutely relevant to the lives of non-bankers. This means the jargon that comes with reporting on the economy has been forced to shift out of the periphery and into the mainstream. Bridging the divide between those versed in the language of subprime mortgages, bailouts, and sovereign debt and those not, are journalists.

BBC Newsnight’s Economics Editor Paul Mason joined Yueh to discuss the intricacies of reporting on the most complex financial and European crises of modern times with chair Peter Heilbrunner, ARD’s Business Editor, at this year’s POLIS conference at the LSE.

Mason recalled an argument inside Newsnight’s editorial team over whether or not the term ‘quantative easing’ could be used in the program. “The concept of Western government printing money was not in anybody’s lexicon,” he said. When it was decided the term needed to be used, BBC interviewed people on the street to see if they knew what the term meant and as a way to engage people in their understanding of it.

“You never presume as a broadcaster that people know these terms. Anyone who turns on the TV should find it understandable,” said Yueh. “If there is a term like quantative easing we have to define the term and say this is why it’s happening and tell the audience a story behind it.”

But acting as translator shouldn’t detract from other responsibilities of the journalist. As both Mason and Yueh highlighted, that means finding out what is going on.

For Mason, the covering of company scandals and crisis sweeping the Eurozone rests on asking that fundamental question that drives journalism: “What is the story?

“The job of the reporter is to relentlessly ask that question: What is going on? What is the story?” Mason said.

Finding the story not only requires figuring out what financial spokespersons really mean, unpacking “choreographed statements dressed up as interviews” as Mason put it, but also looking at what is really being done.

“Journalists have a very important job to do within the information economy as challengers,” said Mason. “I always find boardroom people incredibly non-challenging. Their job is not to challenge, but to execute.” Mason said he loves interviewing CEOs for this reason. “CEOs of a mid-sized company are desperate to talk to someone who will challenge them… My first question is what keeps you awake at night, and you’d be surprised as how many people actually answer it.”

One of Yueh’s favourite types of interviews is with central bankers because they’re known to be vague. “They’re vague because they move markets,” she said. As central bankers set mortgage and borrowing rates, Yueh said it is especially important to explain the context of what is being said, why the views are held, and what they mean for people. “If you can understand how he’s speaking you can give your take and that’s where you get the value added,” Yueh explained.

This poses another challenge in and of itself: trying to unpack complex issues into time-sensitive sound bites. Out of the grey skies of too much info and not enough time, the little Twitter bird is flapping his bright blue wings. Social media is playing a major role filling the gaps that exist in individual’s economic knowledge, and providing the journo with an avenue to tell the part of the story that didn’t make it into a broadcast.

It might not be trending, but #CDS is in use.

This report and photographs by Polis Intern Wanda O’Brien 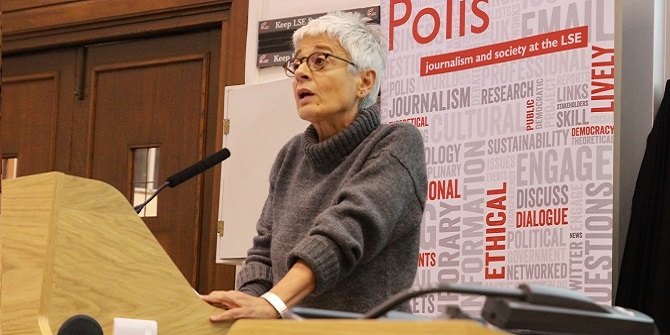 BBC and Channel 4: a marriage made in heaven or hell?