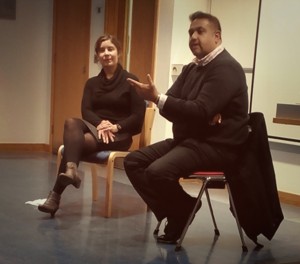 This week,  Polis hosted a screening of the documentary ‘Mo & Me’ followed by a Q&A with its producer, Salim Amin, and chaired by Dr Wendy Willems.

“I’m not afraid of the bullet with my name on it, but I don’t want the bullet that says ‘To whom it may concern.’”

This was a deep, yet humorous quote by photojournalist Mohamed ‘Mo’ Amin on whether any war story was worth his life. In an intriguing documentary released in 2006, Salim Amin,  son of Mohamed ‘Mo’ Amin, undertakes a journey of reflection into the life of his father. “I felt compelled to delve into his past. He was always there [when he was alive] but I never really knew him,” says Salim. Born into a poor family, Mohamed was the second of seven children. At the age of nine years old, he began saving for a camera which he bought at age eleven  for 40 shillings. During his teenage years, Mo’s uncanny talent for capturing the faces and spirit of the times led him to quit school and set up shop as a professional photographer in Dar es Salaam, Tanzania. His company, CameraPix, immediately gained recognition as Amin covered some of the most important events and controversial issues in a politically changing Africa.

At 23 years old, Mo was involved in a political scuffle and kicked out of his home country after spending 28 days in prison. He had to start over in Nairobi, Kenya. Realizing he needed better equipment, Mohamed gained the nickname ‘Six Camera Mo’ as he worked long hours to be able to afford better cameras. Over the course of 30 years, Mohamed evolved into one of the most renowned photojournalists of all time and established CameraPix as Africa’s biggest and best publishing house. Mo’s work constantly put him in risky situations as he successfully captured ethnic tensions, political upheavals, and regime changes. Mo was always ahead in getting the story first as he maintained good habits, accumulated the best political contacts and avoided, as his son states, ‘the typical life of a journalist’ involving drinking and late nights. Mo’s hunger to capture ‘the story’ boosted him to the highest rungs of his profession, but simultaneously hurt his personal life with his wife and son.

In the documentary, his son Salim displays some of his father’s most compelling work capturing  key events in international politics.

Personally shaken by the Ethiopian famine, Mo made a  documentary which mobilized government leaders and musicians across Europe and the USA. In 1985, the creation of the famous song ‘We Are the World’ raised billions for the famine. Mo’s unfailing perseverance, determination, and well known thirst for ‘the story’ ascertained his dominance over photography and gained him recognition as one of the world’s most influential journalists. Mohamed Amin perished in a plane crash along with his colleague Brian Tetley when his flight was hijacked and crash landed in the Comoros Islands.

In a  Q&A session, his son Salim Amin- considered a media activist and one of Africa’s most influential individuals among other titles- engaged the audience further into the life of his father. In response to a question, Salim noted that a major problem in journalism is that reporters are sent to the frontlines without knowing the entire story. On his rocky relationship with his father, Salim advised the audience to not wait to reconcile and confront loved ones. He explained that although his father strived to always have the best story, no war story was worth his life.

Salim quoted his father stating “If I can do it, anybody else can. We are in the most powerful profession in the industry; our work outreaches millions; we can change the world and it can change Africa, which desperately needs it.”

Salim Amin currently heads media giant CameraPix which strives to maintain the legacy of his father and continues to produce the influential work that it is is renowned for.