LSE’s Dr Wendy Willems argues that mobile data bundles are crucial to the growing power of social media platforms in Zambia, increasingly creating a ‘social media internet’. They also pose a number of political challenges to mobile operators and governments on the continent. While calling features on Facebook and WhatsApp threaten the revenue base of mobile operators, the political affordances of social media have resulted in a number of government shutdowns recently.

Corporate social media platforms such as Facebook and WhatsApp (and Twitter in certain countries such as Egypt, Ghana, Kenya, Nigeria and South Africa) are fast gaining ground on the continent. The number of Facebook users in Africa was estimated at 124.6 million at the end of 2015 and continues to grow. A key driver of the growing power of social media platforms on the continent is the mobile internet. The penetration rate of mobile broadband subscriptions in Africa has increased from 1.8 per cent in 2010 to 29.3 per cent in 2016 (ITU), and the majority of African users rely on mobile internet access. 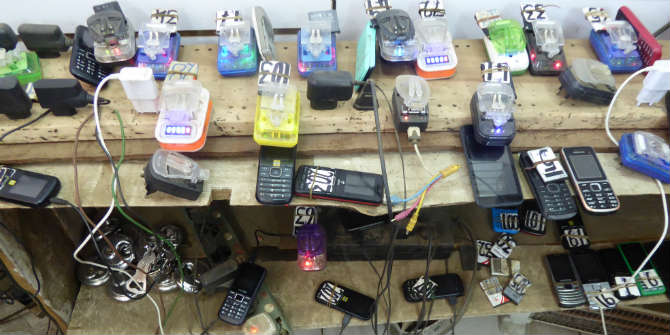 New market entrants such as China’s mobile messaging platform WeChat are intensifying the competition between different digital platforms on the continent. Earlier this week on 30 August 2016, Facebook’s founder and CEO Mark Zuckerberg landed in Nigeria which marked his first visit to an African country. Facebook has in recent years adopted deliberate strategies to expand its reach on the continent, expressed through the company’s ‘charitable’ mission of connecting the next five billion. Facebook plans to provide African users with internet access through the solar-powered Aquila drone in the near future. In addition to this, Facebook’s Free Basics app now enables African mobile phone users in 21 African countries to access a text-based version of Facebook free of charge while Facebook Lite allows users to run the application with less consumption of mobile data.

The introduction of Free Basics in India provoked a heated debate as it was seen to violate the principle of net neutrality. Eventually, the Telecom Regulatory Authority of India (TRAI) ruled that mobile operators cannot charge differential tariffs for data services, which prevented Facebook from introducing its free app. In the African context, Free Basics has solicited some debate but much less controversy, and so far, regulators on the African continent have not acted against Facebook. However, the political role of social media is becoming more pronounced as noticed by governments in Burundi, Chad, Congo, and Uganda and Zimbabwe which recently ordered mobile operators to block access to social media during periods of elections or protests, frequently citing concerns over national security.

Zambia was the first African country where Facebook launched its free app in mid-2014. During my recent fieldwork with mobile internet users, Free Basics was not frequently cited as a platform that Zambians were enthusiastically embracing. Some users indicated that the app had a stigmatising effect, with its use indicating to friends that ‘you are broke’ and have no resources to purchase data. Others argued that the app did not allow much interaction as with the absence of photos, one was never quite sure what photo or video was being commented on. This supports the conclusions of a survey recently carried out by the Alliance for Affordable Internet in eight countries in Africa, Asia and Latin America, which found that less than four per cent of respondents were using zero-rated data services such as Free Basics. 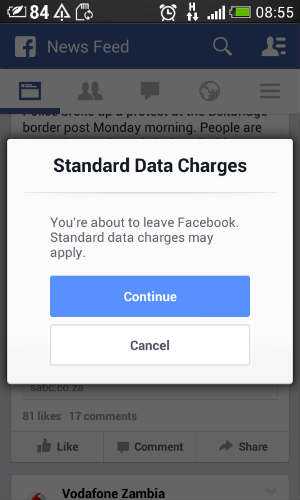 What seems to be more crucial to social media penetration in the Zambian context is the sponsored access of social media by mobile phone operators through attractively priced prepaid ‘data bundles’. For example, Zambia’s largest mobile operator, Airtel, offers a ‘social bundle’ which allows users to access social media for an unlimited time over a certain period (e.g. a day, week or month). The company charges ZMW2 (£0.15) for a daily Facebook bundle and ZMW4 (£0.30) for a daily WhatsApp, Facebook and Twitter bundle. Daily packages are popular and enable users to adjust their data spending according to their income that particular week. With a large proportion of Zambians in informal employment, earnings and incomes are often irregular and daily bundles offer a level of flexibility.

As a result of this, the nature of Zambia’s internet is largely determined by social media. SMS and email are increasingly replaced with Facebook Messenger and WhatsApp. Many small to medium-size businesses do not have websites but market their services on easily managed Facebook pages. Given the subsidised nature of Facebook through data bundles, mobile phone users receive a warning that they will incur data charges as soon as they leave Facebook, eg in order to access a hyperlink outside the social media platform. For this reason, most Zambian online news sites post the full content of articles on their Facebook pages rather than hyperlinks to website content which will be more expensive for users to visit.

Ultimately, this creates an internet experience that largely takes place within the walls of Facebook, raising obvious questions about net neutrality. Zambia’s internet is increasingly becoming predominantly a social media internet. So far, this has not as yet provoked a major debate in Zambia but in neighbouring Zimbabwe, the Minister of Information, Communication and Technology and Courier Services recently ordered the Postal Telecommunications Regulatory Authority of Zimbabwe (POTRAZ) to request mobile operators to suspend data bundle promotions amid protests against government as part of the #ThisFlag movement. Social media bundles, therefore, are a key instrument that both enables and disables mobile internet access. While much critical debate has so far focused on Free Basics, data bundles may be the bigger key to Facebook’s growing expansion on the African continent.

This blog originally appeared on the Africa LSE blog

Dr Wendy Willems is Assistant Professor in the LSE Department of Media and Communications.  She recently carried out fieldwork on the economic and political implications of the mobile internet in Zambia as part of a collaborative project on New Media Practices in a Changing Africa funded by the Norwegian Research Council. Follow her on Twitter @WendyWillems_