Who gets to speak at UK party conferences? Zac Greene and Javier Sajuria argue that selection is made by the leadership in order to influence the debate and resulting policies. The exclusion of prominent Remain voices from Labour’s 2018 conference therefore confirms the leadership’s conviction to leave the EU.

As party conference season is fully underway, Labour’s was off to a quarrelsome start. Following a marathon round of debates over the rules for the selection of MPs, the conference featured talks on some of the most contentious issues of the day, not least Brexit. Unlike the 2017 conference, in which prominent party groups blocked debate over the party’s position on Brexit, a strong movement was afoot this year with over 100 local Labour constituency parties submitting motions to support a referendum on any final deal. Although there seem to be some signs that certain groups within the party have shifted their positions, prominent exclusions from this year’s conference showed a less sympathetic leadership.

In addition to statements from prominent members such as John McDonnell, warning that any new referendum will not include the option to remain in the EU, there were more signs that any change may be less than many campaigners demand. A key signal is who was not included in the conference’s speakers list. Together with a number of more centrist Labour MPs, prominent supporters of remaining in the EU and of a ‘people’s vote’, such as Sadiq Khan, were absent. Although there are many reasons why certain members are given prime spots at conferences, his exclusion in particular is likely a strong indicator of the direction the party leadership seeks to take on Brexit.

What do party conference tell us about party politics and policies?

Despite their regular occurrence and centrality to political debates in many representative democracies, the role of party conferences is fairly unknown. But parties describe these meetings as part of the “democratic policy-making process”, a position now backed by a body of work offering preliminary evidence that these meetings have implications for the selection of leaders and the behaviour and composition of elected governments. But, how do parties structure their debates at these events?

In a recent working paper, we argue that the selection of debates and speakers is dictated through an agenda setting process. We predict that the party leadership and organizers of the conference (such as through the national executive) limit the positions expressed at the meetings through their selection of speakers. This means that party members with more ideologically extreme views or those that are farther away from the leadership’s positions will be less likely to speak at these meetings. To test this hypothesis, we combine data from comparative surveys of party candidates to the list of speakers at recent party conferences from the three major parties.

Based on this data, we find some evidence that party candidates exhibiting greater differences with the leadership are less likely to speak at pursuant conferences. We illustrate this effect in Figure 1. In particular, we present the predicted probability that a candidate speaks at a party conference over values of the individual’s self-reported distance from the party leader. The effect is clearest for the governing party. Only those candidates reporting that their preferences are relatively close to the party’s are likely to speak at conferences for the incumbents. However, this effect is reversed for opposition parties, as opposition leaders are more likely to encourage diverse groups to participate. 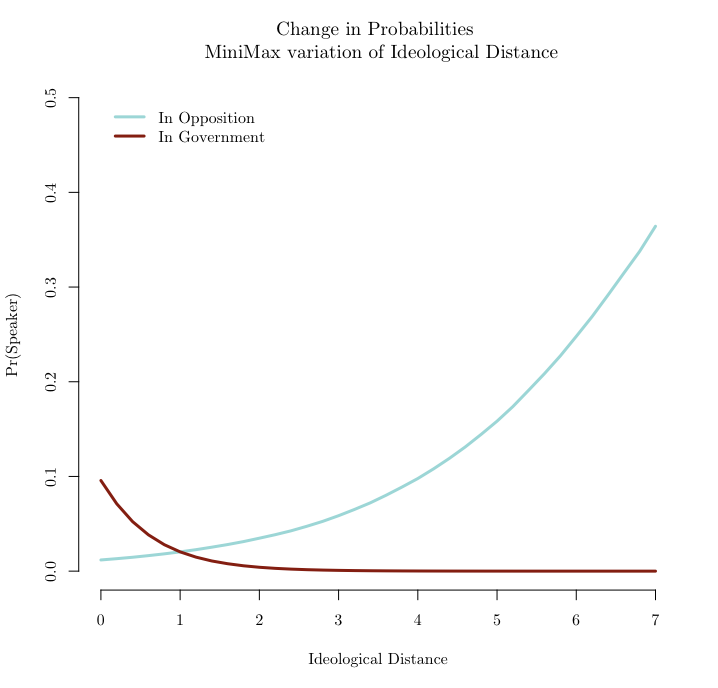 These findings do not fully offer an explanation as to why prominent supporters of remaining in the EU would have been excluded from the Labour party conference, however, given the party’s leadership’s position on the matter. So, we further explore this dynamic by comparing individuals’ expressed differences with the party leadership with a measure of preferences derived from an automated content analysis of the speeches (using Wordfish) given at party conferences.

The estimates from this analysis enable us to compare the individuals’ perceived differences with the party’s through their revealed differences from their actual speeches at the resulting conferences. If party leaders exhibit greater control of the content of debates at these meetings, we predict that the relative positions expressed by each speaker at the meetings will be closer to the leadership than their self-reported positions from the candidate surveys.

We show the results from Labour and Conservative speakers in 2015 in Figure 2. From the limited selection of party candidates that actually spoke at conference, we find a tendency for speakers from both parties to exhibit greater variation in their self-reported positions than in the positions scaled from their speeches. This logic suggests that, even for the Labour Party, the party’s leadership exhibits control over the debates within this context. Anecdotally, this perspective helps to explain the controversy surrounding one of the standout speeches from the 2018 autumn meeting: Keir Starmer’s ad-libbed deviation from the leadership’s position on a people’s vote was not included in the official speech likely screened by the leadership and published in advance.

Figure 2. Correlation between Wordfish scores and CCS self-declared scores in 2015 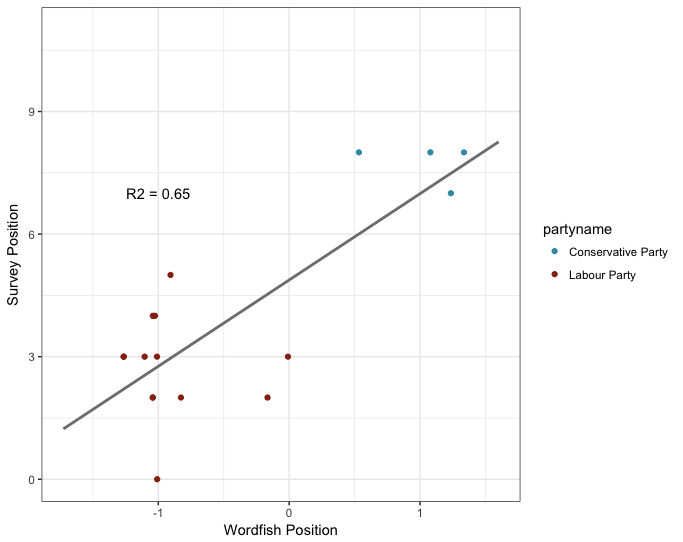 Altogether, this research fits with recent evidence that party conferences are a key context in which party leaders exhibit their control over the party’s policymaking. Although conferences can be a context in which minority groups highlight their differences with the leadership, evidence from France suggests that outcomes from these meetings such as the party’s election platform will better reflect the goals of the dominant faction or leadership within the party (Ceron and Greene 2018).

A large number of constituency Labour parties have successfully managed to force a debate on the future of Brexit, but our research would suggest that those in favour of a people’s vote should not hold their breath. The exclusion of prominent party members that deviate from Corbyn’s position on the issue suggests that the leadership has limited appetite for making it possible, regardless of the vote from the conference delegates

Zac Greene is Senior Lecturer and Chancellor’s Fellow at the School of Government and Public Policy, University of Strathclyde.

Javier Sajuria is Lecturer in the School of Politics and International Relations at Queen Mary, University of London.

All articles posted on this blog give the views of the author(s), and not the position of LSE British Politics and Policy, nor of the London School of Economics and Political Science. Featured image credit: Rwendland, Wikimedia Commons, CC BY-SA 4.0. 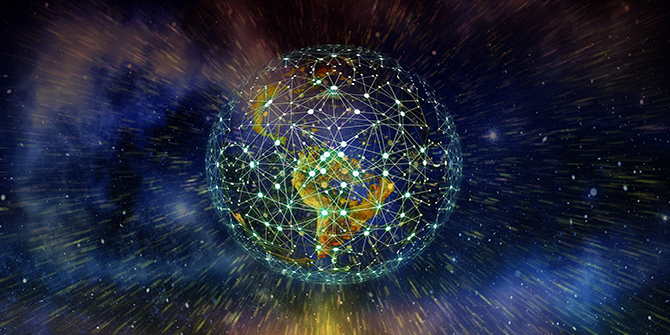