As the vote on Scottish independence gets closer, the polls are steadily narrowing. The Yes camp believes that to win the referendum they need to persuade enough Labour affiliates to back an independent Scotland. Craig McAngus examines data on Labour affiliates’ attitudes with regards devolution of more powers and constitutional change in Scotland more widely.

With less than 6 months to go, the countdown towards the referendum on Scottish independence has heralded a period of even more intense debate and rhetoric, as well as heightened media interest from outside Scotland.  Encouragingly for the Yes campaign, the plethora of opinion polls have consistently shown a narrowing of the gap between a Yes and a No vote, and the latest poll at the time of writing showing Yes Scotland only require a 5% swing to be on equal terms with Better Together.

To win the referendum, Yes Scotland need to persuade enough Labour affiliates to back an independent Scotland.  Despite the electoral nightmare of the 2011 Scottish election, 37% of the Scottish public in 2013 stated that Labour are the party that they are ‘closest to’ and thus affiliate with.  Yes Scotland know this and have stepped up their campaigning activities in areas traditionally thought of as ‘safe’ Labour fiefdoms such as the East End of Glasgow.  If Yes Scotland can persuade a solid majority of people living in some of Glasgow’s vast housing estates to turn out in support of independence, then Scotland will likely wake up on the 19th of September with a Yes vote.

Labour have hit back recently with their proposals for further devolution in the event of a No vote. At the heart of Labour’s proposals are more extensive powers over income tax and the devolution of housing benefit and attendance allowance. However, Labour have stood firm with regards to devolving more significant welfare payments, arguing that to do so would undermine the social union which underpins the UK and that the UK provides the strongest economic basis upon which social justice can be delivered.

With Labour affiliates unlikely to support proposals from either the Conservatives or the Liberal Democrats, Labour’s proposals now stand in opposition to the vision of an independent set out by the Scottish Government. The question is, where do Labour affiliates’ attitudes lie with regards to the devolution of more powers and constitutional change in Scotland more widely? Data from the 2013 Scottish Social Attitude survey can help shed some light on this question.

Compared to the rest of the Scottish population, Labour affiliates were less supportive of the idea that all decisions affecting Scotland ought to be taken in Scotland (40% to 22%). However, Labour affiliates were most enthusiastic about the idea of Devolution Max (everything decided in Scotland apart from defence and foreign affairs) compared to those who don’t identify with Labour (39% to 28%).  The proportions who felt that the devolved settlement should stay as it is were pretty comparable (29% for Labour affiliates compared to 24% for the rest). Despite being markedly less supportive of all decisions affecting Scotland being made in Scotland, independence in other words, a strong majority of Labour identifiers do wish to see significantly more powers transferred from Westminster to Holyrood.

Figure 1: Where should decisions affecting Scotland be made? 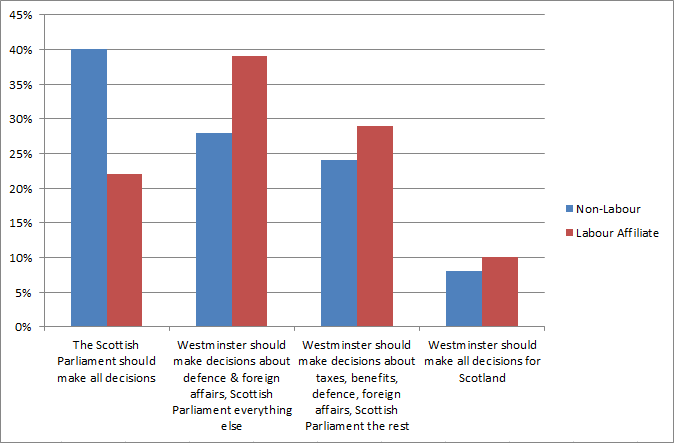 Analysis of some of the actual powers that could potentially be transferred from London to Edinburgh reveals an interesting picture. When asked about where decisions about taxation and welfare benefits should be made, a strong majority of Labour affiliates believe that these decisions should be taken by the Scottish parliament (57% and 56% respectively).  This closely mirrors the opinion of the rest of the Scottish population (63% and 60%).  One area of divergence that occurs is around the issue of defence and foreign affairs.  Non-Labour affiliates are fairly evenly split (47% and 48%) between whether the Scottish Parliament or Westminster should control defence and foreign affairs, whilst a firm majority (66%) of Labour affiliates believe Westminster ought to retain this competency.

Figure 2: Where should decisions on tax be made?

Figure 3: Where should decisions about the level of welfare benefits be made?

Figure 4: Where should decisions about defence and foreign affairs be made?

On one level, this is an unsurprising finding given the question issue of defence and foreign affairs impacts upon the future of shipbuilding in Govan. However, another curious finding points to a deeper, more emotional attachment to the UK.  In recent years, the Scottish Social Attitudes survey has asked a question regarding how much more or less likely it is that the respondent would vote for independence if they were to be better or worse off to the tune of £500.  When asked of non-Labour affiliates, 57% were more likely to vote for independence if it made them better off and 66% would be more likely to vote against independence if it made them worse off.  With regards to Labour affiliates, 45% would be more inclined to vote for independence if it made them better off, with 80% more likely to vote against independence if it was to make them worse off.  The burden of proof is with the case for Yes on both counts, but there is a far bigger gap between the two financial outcomes for those who affiliate with Labour.  Logically, if the decision whether or not to back independence was a purely rational one based on personal financial gain, then one would expect these proportions to be more or less the same.  Although the gap exists for non-Labour affiliates, it is far greater for Labour affiliates.  In other words, there is clearly an underlying, emotional force and attachment to the idea of the UK that transcends personal financial gain.

Part of this puzzle may lie in the fact may lie in the fact that, despite identifying strongly with a Scottish sense of identity, Labour affiliates are more ‘British’ than the rest of the Scottish population. When asked to locate their national identity on the infamous Moreno scale, a higher proportion of Labour identifiers (38%) chose ‘equally Scottish and British’ than non-identifiers (28%). The proportion of both groups choosing ‘more Scottish than British’ is nearly identical, but when it come to the proportions choosing ‘Scottish not British’, there is a sizeable gap between Labour affiliates (21%) and the rest of the Scottish population (31%). Further analysis shows that there is indeed a statistically significant difference between the two groups.

Figure 7: National identity according to the Moreno scale 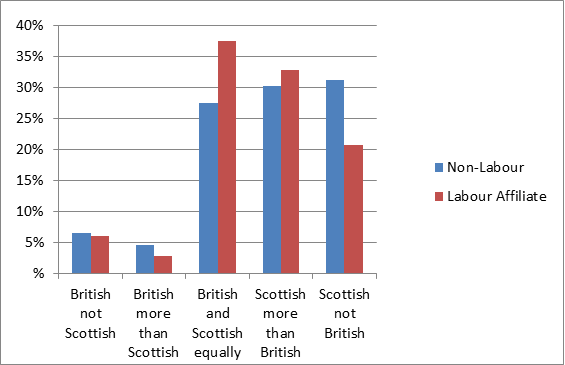 The analysis presented here is only a partial snapshot of the underlying dynamics that are driving the opinions and attitudes of the Scottish electorate. What it does show is that Labour affiliates in Scotland are attached to the UK in a way that transcends mere financial gain. The whole notion of the ‘social union’ championed by the SNP therefore seems entirely rational given the feelings of Labour identifiers. However, the evidence laid out in this article clearly shows that Yes Scotland has its work cut out given that the burden of proof rests with an independent Scotland when it comes to persuading Labour affiliates. Equally, those advocating the continuation of the Anglo-Scottish union must also understand that Labour affiliates do desire significantly more autonomy for the Scottish Parliament, autonomy that extends beyond the proposals outlined by Labour’s devolution commission report. Overall, Labour affiliates are not tightly fixed on either camp, but they are more tightly fixed with the UK over an independent Scotland. That said, the desire to see significantly more competencies in Edinburgh, coupled with the strong possibility of another Conservative-led government at Westminster, may be enough to tip the scales in favour of a Yes vote.

Note:  This article gives the views of the author, and not the position of the British Politics and Policy blog, nor of the London School of Economics. Please read our comments policy before posting. Homepage image credit:

Craig McAngus is a Research Fellow at the University of Stirling.  He is currently working on a branch of the ESRC’s Future of the UK and Scotland project which looks at whether Scotland can become a more gender equal society. His broader research interests include political parties, public attitudes and constitutional change in the UK. 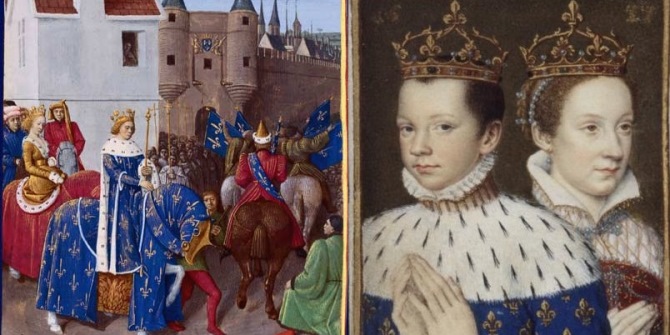 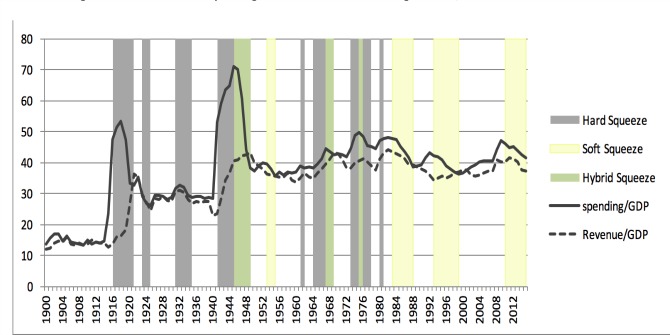