The public sector is often seen as sclerotic and conservative in contrast with a dynamic and innovative private sector. This assumption lies at the basis of much of the outsourcing of public services to the private sector. In this interview and her new book, Mariana Mazzucato argues against this assessment and in favour of state-led innovation and economic growth. She maintains that the public sector usually bears the highest risks of funding innovation without then reaping the rewards.

What are the myths about the public sector and private sector that you say need to be debunked?

The myth is of a dynamic, creative, colourful, entrepreneurial private sector, that at most needs ‘unleashing’ from its constraints from the public sector. The latter is instead depicted as necessary for fixing ‘market failures’ (investing in ‘public goods’ like infrastructure or basic research) but inherently bureaucratic, slow, grey, and often too ‘meddling’. It is told to stick to the ‘basics’ but to avoid getting too directly involved in the economy.

Instead, if we look around the world, those countries that have grown or are growing through innovation-led growth are countries where the state did not limit itself to just solving ‘market failures’ but actually developed strategic missions, and was active in directing public investment in particular areas with scale and scope, changing the technological and market landscape in the process. And ironically one of the government’s that have been most active on this front is the US government, which is usually depicted in the media (and by politicians) as being more ‘market oriented’. From putting a man on the moon, to developing what later became the Internet, the US government, through a host of different public agencies, provided direct financing not only of basic research but also applied research and even early stage public venture capital (indeed Apple received $500,000 directly from public funds). In each case it provided funding for the most high risk/uncertain investments, while the private sector sat waiting behind.

What do you say to those who would argue that the government is not good at picking winners? That government spending crowds our private investment?

All this fear about the government trying and failing to pick winners is exaggerated. Both Apple and the technologies behind the iPhone were picked! But picking winners is more probable when the state is described as though it is relevant rather than irrelevant. When government is given a mission, proper funding, and organizes its agencies so they are dynamic and able to ‘welcome’ the exploratory trial and error process that accompanies innovation, it can attract top expertise and dynamism.

Today, we see countries that are growing thanks to a courageous public sector and through mission oriented policies. For example, China is spending $1.7 trillion on five key new broadly defined sectors, including ‘environmentally friendly’ technologies. Brazil’s active state investment bank is spending more than $60 billion just this year on green technology. The economics profession doesn’t adequately account for this kind of state-led activity, but only warns of governments ‘crowding out’ private business or failing at picking winners.

What governments are doing today with regards green technology is not crowding out but crowding in business investment by creating a vision around it, and funding the most capital intensive areas with high market and technological risk. But we must also change the language. To me, ‘crowding in’ still sounds negative, as it is being compared to a benchmark of useless government. In my new book I go into this further, and suggest some new language and images that can really change the way we talk about and imagine the space for the public sector.

Could you elaborate on your argument that modern capitalism is rewarding value extraction over value creation?

The problem is that by not admitting this entrepreneurial risk-taking role that the state provides, we have not confronted a key relationship in finance: the relationship between risk and return. Innovation is deeply uncertain, with most attempts failing. For every Internet there are many Concordes or Solyndras. Yet this is also true for private venture capital (VC). But while private VC is then able to use the profits from the 1 out of 10 successes to fund the 9 losses, the state has not been allowed to reap a return. Economists think this will happen via tax (from the jobs created, and from the profits of the companies), yet so many of the companies that receive such benefits from state funding, bring their jobs elsewhere, and of course we know they also pay very little tax. Thus the return generating mechanisms must be rethought. It could be done through retaining equity, a ‘golden share’ of the intellectual property rights, or through income contingent loans. But currently this is not even discussed. When Google received funding for its algorithm from the National Science Foundation (NSF), is it right that after it earned billions nothing went back to the NSF (which is today starved of funds), or that some of Apple’s profits go into a national innovation fund to fund the next wave of Apples?

What this means is that we have socialized the risk of innovation but privatised the rewards. This dynamic is one of the key drivers of increasing inequality. Because innovation today builds on innovation tomorrow, the ‘capture’ can be very large. This would not be the case if innovation were just a random walk. Policy makers must think very hard how to make value creation activities (done by all the collective actors in the innovation game) rewarded above value extraction activities (in this sense capital gains taxes are way too low). And since the booty from the latter can be very large, redirecting incentives and rewards towards the value creators is essential. The problem is that some of the ‘extractors’ like to sell themselves as the creators.

Are there areas of the economy for which the government needs to increase investment?

I believe the green economy merits much more funding than it is currently receiving by government. In the book, I look at global green investments, and conclude that few parts of the world are investing in the kind of scale and scope that will be necessary for a green revolution to happen. Part of this is due to governments being under extreme pressure to cut back spending. But another part is due to the lack of a proper risk-return relationship. Imagine how much more money there would be in state coffers today to fund green technology had even just .05% of the profits from the internet investments come back into something called the ‘public innovation fund’. Instead it is dry.

How can the UK get its economy going? What role does the public and private sector have in this?

And one of the key problems is that the way that the UK understands investments, is that somehow private business simply needs incentives, either via tax or regulation. Instead, what we know about private investment is that it is driven not by such tweaks, but by where the big new technological and market opportunities are. Indeed, Pfizer left Sandwich, Kent to go to Boston, not because of the lower tax or regulation there but due to the $32 billion a year (this figure is for 2012) that the National Institutes of Health spends in the knowledge base.

The UK economy is suffering from various problems:

Professor Mariana Mazzucato (PhD) holds the Chair in the Economics of Innovation and Public Value, University College London (UCL) where she is establishing a new Institute for Innovation and Public Purpose. Mazzucato’s highly-acclaimed book The Entrepreneurial State: debunking public vs. private sector myths (Anthem 2013; Public Affairs, 2015) was on the 2013 Books of the Year list of the Financial Times. She is winner of the 2014 New Statesman SPERI Prize in Political Economy and the 2015 Hans-Matthöfer-Preis and in 2013 she was named as one of the ‘3 most important thinkers about innovation’ in the New Republic.

She is co-editor of a new book, Rethinking Capitalism: Economics and Policy for Sustainable and Inclusive Growth (Wiley Blackwell, July 2016). Her new book The Value of Everything, will be published by Penguin (Allen Lane) in 2017.

Posted In: 5 minutes with | Economy and Society 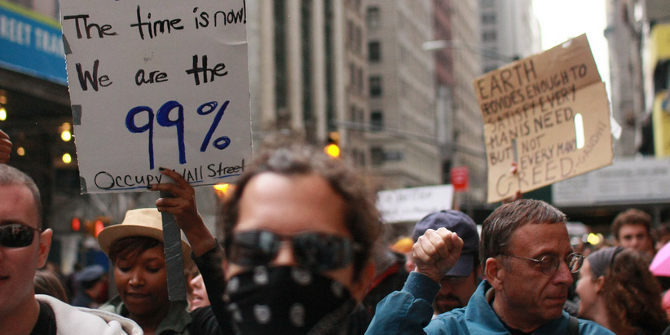