Immigration was centre-stage in the referendum campaign and the Leave vote raises many questions about the future direction of immigration policy. Will the UK retain free movement as a condition of keeping access to the free market? Or will potential EU migrants face the same rules as non-EU nationals in a post-Brexit Britain? Jill Rutter discusses how these issues are important: but so are issues of integration.

With such an intense focus on immigration policy – determining who can enter and stay in the UK – there is a danger that integration, and what happens to migrants after they arrive in the UK, will be forgotten. But the referendum result also raises many questions about the future direction of integration policy. It shows clearly that debates about integration play out differently in the different parts of the UK.

Some of the strongest support for Leave came from the towns and villages of the Fens, the agricultural heart of England, with four of the top ten biggest Leave votes coming from this area. The Fens are a major producer of cereals and vegetables, which support a large food packing and processing industry. The intensification of agriculture and changes to food  production and consumption patterns—particularly ‘just-in-time production’ for supermarkets—require a large, but flexible labour supply, now increasingly made up of EU migrants, many of them agency workers. Staff turnover in businesses that use agency workers makes it difficult for friendships to be forged between migrants and non-migrants.

Annual Population Survey data for 2014 suggests 99,000 EU migrants in the districts that make up the Fens, with this figure excluding the many short-term migrants from eastern Europe and Poland in the area. Such a large population increase in a sparsely populated area has put pressures on housing and public services and has fueled some of the understandable resentment to new migrants in the area. 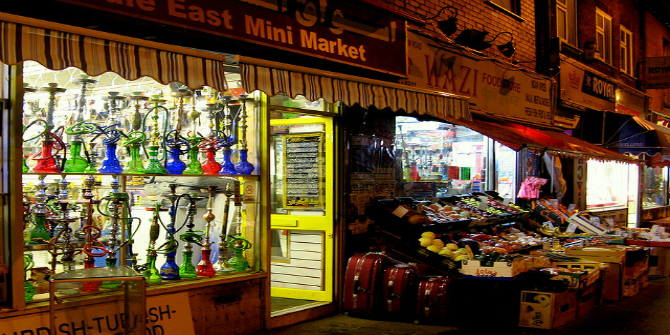 Manchester, in what has become known as ‘the curry mile’ (Image: Suvodeb Banerjee CC BY 2.0)

A first lesson raised by the Leave vote, is that integration—a two way process of mutual accommodation—is much harder to achieve where there is competition for housing, jobs and public services. In the next months and years those concerned with integration need to consider the extent to which integration policy can be advanced without addressing broader housing, labour market and regional development challenges.

Parts of England and Wales that have seen the decline in their traditional manufacturing industries also voted Leave, some of them by a large margin. But when broadly similar places were compared there was often quite a large variation in the Leave vote between areas. Some 62 per cent of voters in Stoke-on-Trent opted for Leave, while in Knowsley just 51 per cent did so. Both areas have experienced changing economic fortunes: Knowsley with a reduction in motor industry jobs at Halewood and Stoke losing all of its coal and steel much of its ceramics. But Knowsley appears much more comfortable with the EU, including free movement.

The anthropologist Sandra Wallman’s concept of “capable” places may provide some explanations of these differences. She argues that broadly similar areas often respond differently to changes brought about by international migration. In her book The Capability of Places, Wallman argues that “open” communities – both rich and poor – find it easier to accommodate newcomers than do those which she categorises as “closed”.

Features of open communities include good transport links in and out of the area, a mixed economy and a mixture of housing types. Wallman also argues that social networks, as well as dominant neighbourhood narratives about “us” and “them” and “belonging” influence the extent to which an area is open or closed. Social networks that span dissimilar groups – bridging social capital – tend to make an area more open, as does a local identity that is not defined by ethnicity or birth, but inclusive of newcomers.

As a port city and with longstanding Irish and black communities, a Scouse identity may be more inclusive of new arrivals. But the identity of an area and its people can change relatively quickly, as a Joseph Rowntree Foundation study of Downham in south London shows. Here, improved public transport, as well as changes to school admissions policy brought about greater social mixing between those who lived in Downham and outsiders. Over a ten year period, this one isolated outer-city suburb became much more open and outward looking.

Understanding what makes an open community suggests some alternatives to current integration policy. Arguably, we need to give more attention to transport links and other ways to promote greater social mixing. Post-Brexit, integration policy also needs to be responsive to the different geographies of the UK. Integration should move us towards neighbourhoods that can adapt to change, and to a country where we are no longer “them” and “us”, but a confident and inclusive Britain that feels welcoming.

Jill Rutter is Director of Strategy and Relationships at British Future, the immigration, integration and identity think tank. She has previously worked at IPPR and the Refugee Council and is author of Moving Up and Getting On (Policy Press, 2015) a book that looks at integration policy in the UK.