A new book edited by Dave Richards, Martin Smith and Colin Hay situates the rise of UKIP within the context of institutional malaise. A growing distrust of the major institutions in the UK are linked to wider political and social disengagement. For a long period, citizens have not been privy to the actions and decisions of institutions and the result has been the perpetuation of poor, often self-interested practices hidden from public view. In this article, Dave and Martin write that to regain trust and to create proper forms of accountability, organisations need to start operating in ways that recognises an open information world.

Despite the concerted efforts of the three major parties and much of the mainstream media, the May 2014 local and European election results confirm the rapid upward trajectory of UKIP as a force, at least for the present, on the British political scene. Farage and his party are portrayed as successfully mining a powerful ‘anti-politics’ seam among voters disillusioned with the status quo. UKIP’s success in part is explained by its riding on the coat-tails of a longer period of political disillusionment and growing distrust of politics and politicians. Much of the heat surrounding this debate settles on the perceived failings of a Westminster Establishment, refracted through the parodying of the three main party political leaders as out-of-touch, metropolitan elites.

In a new book, Institutional Crisis in 21st Century Britain, we argue the issues currently confronting Cameron, Clegg, Miliband et al are in fact part of a much wider institutional malaise in Britain, playing-out not only in Westminster, but across a contiguous range of institutions each of which are embroiled in a series of crises with potential long-term ramifications. The range of apparently unconnected crises is almost endless:

Political institutions have also seen a range of problems including the long running sore of parliamentary expenses, cash for questions and honours, debates over the continuation of the Union and Britain’s relationship with the EU, the problem of political parties and their declining support and ability to speak to or for the electorate, the continuing issue of the ability of central government to deliver, and growing distrust between politicians and officials. There is strong evidence that these crises have led to a growing distrust of the major institutions in the UK and seems to be linked to a wider set of political and possibly social disengagement.

Up to now, one approach to the perceived crisis of Westminster and the emergence of an ‘age of anti-politics’ has been to focus on the demands made by citizens and their unrealistic expectations. For example, the arguments of Matthew Flinders and Peter Riddell (reprising the overload arguments of the 1970s) is that the electorate is unrealistic in its expectations or even decadent in its inability to see the worth of British democracy and the hard work and self-sacrifice of politicians. This has led to a skewed relationship between the governors and the governed in which individuals have an acute sense of their rights but an under-developed understanding of their reciprocal responsibilities to the democratic process.

The evidence from the contributing chapters in our book reveals a rather different picture. For a long period, citizens have not been privy to the actions and decisions of institutions and the result has been the perpetuation of poor, often self-interested practices hidden from public view. There is in effect a growing dissonance in informational logic between traditional institutions, with their long-established modes of accountability and transparency, and the views and knowledge of citizens, who have access to new forms of technology (e.g. social media, big data). It is this dissonance that has led to a loss of faith on the part of the public in how many of Britain’s institutions operate, which in turn has fermented a sense of crisis.

Many of the crises have occurred when practices which were seen as normal and acceptable within the institution were revealed to a world which was shocked by what went on behind closed doors. In the case of Jimmy Savile and the BBC it appears knowledge of his sexual behaviour was well known but not challenged. Of course, once the public knew of his activities, there was shock that he had not been prosecuted while alive. In the case of the newspaper seller Ian Tomlinson, the initial police response was that he died as a result of being involved in a demonstration and that they were coming to his assistance in the context of violent disorder. It was the later emergence of mobile phone footage that revealed Tomlinson had been pushed over by a police officer whilst walking away from police lines.

The point is that these crises are not disconnected but are, to ape C.P. Snow, ‘a clash of two cultures’. The reoccurring crises reflect how institutions in the UK have been ostensibly closed, self-governing elites making decisions based on their own logics. When investment bankers were paying themselves enormous bonuses or MPs claiming outrageous expenses, the self-governing processes could easily legitimise their actions to themselves; they held themselves to account and as good and decent people could be trusted to do so. The process of institutional governance in the UK has been based on what David Marquand and Mick Moran refer to as the tradition of ‘club government’. However, these processes of self-regulation sit uneasily with the new world of information. When lights are shone into institutions, their activities and decisions do not appear benign to the public who are frequently shocked by what is revealed. The core problem is that institutions are continuing to act on the basis of a closed informational world. But it is a world that no longer exists. What has occurred is a transformation in the availability, form and use of data which makes the closed, club government world of Britain’s traditional institutions unsustainable.

The last decade has seen a range of developments which are opening up information and how it is used: The Freedom of Information (FoI) act is increasingly being used as a political and journalistic tool to reveal the decisions and processes of institutions (for example, FoI was used by Heather Brook led to the revelations about MP’s expense claims); The proliferation of smart phones and tablets means that footage taken by citizens is increasingly used to challenge ‘official’ narratives of institutions; social media is being used to challenge institutions through the collection and distilling of information, revealing alternative accounts, organising action, and creating political process; many of the crises, for example in the NHS, have been the result of whistle-blowers, who have increasingly become political actors, no longer prepared to conform to an institution’s organisational logic; the digitisation and availability of vast amounts of data allows detailed analysis of the performance of organisations; and finally, citizens are increasingly willing to engage in political protest and unwilling to accept formal institutional accounts.

The key point is that crisis is endemic in UK institutions because they were set up at a time of closed information and effectively were empowered to make decisions without external validation. New sources of information reveal many unacceptable practices and have led to a broad crisis of trust. We see similar events reoccurring across institutions and in the case of the police in the same institution time and time again. To regain trust and to create proper forms of accountability, organisations need to start operating in ways that recognises an open information world. Decision makers need to ask – if this decision or process is revealed can it be defended? How does it look to those not involved in the process? The recognition of openness means that institutions have to accept that they are accountable for their decisions and can use this process to start to rebuild trust with citizens.

We need to end the infantalisation of the public and abandon out-dated institutional practices, effectively caricatured in the adage ‘the man [sic] in Whitehall knows best’. The antidote to the current clash of two cultures is greater openness and transparency which can increase public trust and lead to better decisions.

Note:  This article gives the views of the authors, and not the position of the British Politics and Policy blog, nor of the London School of Economics. Please read our comments policy before posting. Homepage image credit: Tim Parkinson 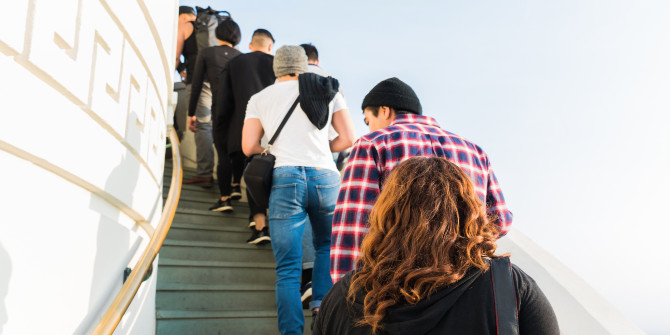