In his speech to the Liberal Democrat conference, the Deputy Prime Minister Nick Clegg announced £120 million of new funding for mental health, pledging £40 million this year and a further £80 million in 2015-16 to end what he describes as the ‘second class treatment’ of mental health patients. Richard Layard puts the case for a ‘programme for national wellbeing’, with mental health at its core.

When money is tight, policy should focus more than ever on the things that really matter to people – especially on the things that worry them most from day to day. As wellbeing research shows, their top worries are their human relationships and the mental health behind these relationships. These are things that can be affected by evidence-based public policy. If there is a proper package in this area we can do great good, and the electorate will be grateful that politicians really understand their problems. The focus should be on values and how people behave, and mental health.

Two-thirds of the electorate (and 97% of MPs) know someone with a mental health issue. But currently only a third of these mentally ill people are in treatment, and even for those on ESA it is under a half. Their families are often desperate. This situation is both unjust and a shocking economic waste.

A programme to improve values and psychological health would probably involve no net cost to the Exchequer and even its gross cost would be under £1 billion, with infinitely greater effects on our national life than any infrastructure investment of equal cost. So in this paper I suggest a set of specific policies focused on parents and young people and based on evidence guaranteeing a cost-effective outcome. The package comprises support for parents (over child behaviour, family conflict, and parenting generally), wellbeing in schools (better school discipline, better values, and better life skills), better mental health (improved access to psychological therapy, waiting time targets, and a CAMHS worker in every school), and better job prospects (our apprenticeship guarantee and job guarantee).

We can begin with a striking fact. Suppose we divide the whole adult British population into those who are most miserable (the quarter who are least satisfied with their lives) and the rest. We can then ask, what factors best explain which people are miserable? Here are the weights attaching to four of the most important factors:

There are two reasons why mental health matters so much. One is that 6 million people have diagnosable mental illness – twice as many as are unemployed. The other is the damage which it can cause, including broken families, chaotic children, and disability and welfare dependence.

Here is another fact, this time about children aged 10-15. They were asked, ‘how do you feel about your life as a whole?’. Their reply was heavily influenced by whether they were from a broken family and by whether other children misbehave in school – but very little by the income per head in the family. Much other evidence (such as in this 2012 Office for National Statistics report on wellbeing data from the Annual Population Survey) confirms the huge importance of other factors, as compared with family income. In fact, family income per head only explains 1 per cent of the variation in life-satisfaction across the British population.

The conclusion must be that if we want to help the deprived, we need a much wider concept of deprivation. You are as deprived if you have enough but cannot enjoy your life as if you do not have enough. So we need to help people achieve satisfying relationships (including work) as much as we help them with money. This is also good politics since there are people in every social class whose lives are ruined by chaotic relationships, depression and crippling anxiety, who would be delighted to hear politicians talking about these things. So let me outline a possible evidence-based package, and show how little it would cost.

Nearly 1 million children and young people and 6 million adults are mentally ill. The Health and Social Care Act promises parity of esteem for mental and physical health. But less than a third of mentally ill people are in treatment. This is true of children and adults, and is mainly due to lack of facilities. Moreover, there are no waiting time targets for psychological therapy. It is a disgrace and a new deal is required in which treatment is as available for mental illness as it is for physical illness.

An essential feature of a good society is that young people feel they are wanted, and have a natural way in which they can contribute to society. There are two excellent policies for this:

Better school discipline and values yield savings which are harder to measure. But the gross cost of the proposals is small. The apprenticeship guarantee is supported by the evidence of a 40% rate of return to apprenticeship – much of which goes to boost tax receipts. The job guarantee is estimated to recover about half its cost in savings on benefits and lost taxes.

The gross cost of these proposals (before deducting savings) would need some work but may be of the order shown in the table below. The low cost of the first four rows is striking, when one considers their transformative potential for people’s lives and the daily worry that these issues cause. 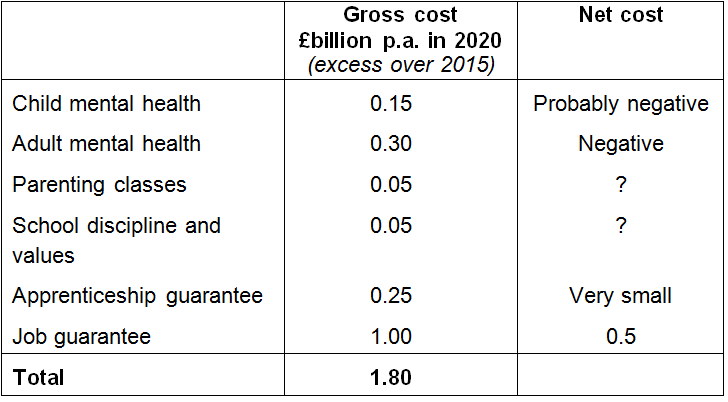 The happiness of our community depends, more than anything else, on how people behave. This in turn depends on their values and their mental health. We can no longer treat these issues as marginal. There are professional ways in which they can be addressed. How they are packaged is for politicians to decide, but obvious possibilities include a Wellbeing Programme, or a Charter for Parents and Young People, or 5 Pledges. Five possible pledges are: free professional support for parents with a difficult child, in family conflict or wanting parenting advice; free professional help with depression and anxiety (including post-natal depression) within 28 days; specific training for teachers wishing to improve their class control or to teach life skills; an apprenticeship for every young person who wants one and has any GCSEs; and, a job for every young person within 6 months of looking, with no option of life on benefits.

However it is done, politicians need to show the electorate that they know what worries them, and have specific, costed ideas about how to help them.

Note: This article gives the views of the authors, and not the position of the British Politics and Policy blog, nor of the London School of Economics. Please read our comments policy before posting. Featured image credit: ‘Silhouettes – Wellbeing Space’, Joe Flintham, CC BY ND 2.0.

Richard Layard is Emeritus Professor at the London School of Economics, programme director of the Centre for Economic Performance, and a Labour life peer in the House of Lords. He is a labour economist who has worked for most of his life on how to reduce unemployment and inequality. He is also one of the first economists to have worked on happiness, and his main current interest is in how better mental health could improve our social and economic life. He is the author of many books, including Happiness: Lessons from a New Science and Thrive: The Power of Evidence-Based Psychological Therapies, his latest book co-authored with David Clark.