The Royal Mail faces an uncertain future with a pension shortfall of over £10 billion and declining letter volumes due to the rise of email and social networking. Chris Gilson argues that rather than fully privatising Royal Mail, the government should resurrect Labour’s  plans create a new ‘People’s Post Bank’ , which would provide Royal Mail with new revenues and  provide a Universal Banking Guarantee to those in need.

In September, business secretary Vince Cable revealed that the government is to begin  privatising Royal Mail, citing declining revenues in rural areas and the need for greater capital investment. He also raised the possibility of creating a John Lewis style staff ownership structure for the Post Office as part of the sell-off. But many have expressed their doubts at the feasibility of the plan due to the cost of restructuring, the massive unfunded pension liability and dealing with declining letter volumes without holding a monopoly on postal service provision.

Might a ‘People’s Post Office Bank’ in the UK be able to both help an ailing Royal Mail and win back people’s trust in the banks by giving them the chance to access simple low cost accounts and mortgages?

Three years of financial turmoil, massive government bailouts and accusations of excessive bonuses have led to plummeting consumer confidence in the banking sector. A survey conducted by Which? Magazine in January 2010 found that 77 per cent of people felt that banks should concentrate in rebuilding trust with customers. In addition, retail banking consumers often complain of incomprehensible fees, insurance and overdraft regimes. Bank and Post Office closures, particularly in rural areas, have also negatively impacted small businesses which now face higher administrative costs due to reduced access to basic services.

A month before the general election Labour ministers announced their intention to transform the Post Office into a network of ‘People’s Banks’ which would empower some of the estimated 1 million adults in Britain who do not have a bank account and would otherwise be financially excluded. The proposal was supported by a 2009 report from the New Economics Foundation, the Federation of Small Businesses, Unite and the CWU. The new government should reconsider Labour’s plan given that a great deal of the necessary infrastructure is already in place.

The example of Kiwibank

While France, Italy and Germany all run state banks through their Post Office networks, New Zealand’s example is an especially helpful one. In the early 1990s New Zealand Post (the country’s equivilant to Royal Mail) was experiencing lacklustre profits and declining revenues from its postal services. At the same time New Zealanders had growing concerns about the effective monopoly of foreign-owned banks in the country which were able to charge high account fees and close small bank branches (especially in rural areas), and offered only relatively high rates of credit and mortgage interest. In 1999 Helen Clark’s Fifth Labour government, along with its coalition partner the Alliance, pledged to create a state owned bank, which would take advantage of the postal system’s network of branches to provide geographically extensive banking services.

Kiwibank was created in 2002 as a state-owned enterprise under New Zealand Post but is run as a profit-oriented company. Since its inception about 300 branches of New Zealand Post have also become Kiwibank branches, making it the largest bank in the country in terms of branch numbers. The bank boasts 650,000 customers at present and total loans outstanding of $10.4 billion (about £4.9 billion), and $6.9 billion of retail deposits (£32.2 billion).

While Kiwbank’s market share for deposits and mortgages in New Zealand remains under the 10 per cent level, it has experienced steady growth over the last eight years and is widely credited with lowering bank and mortgage fees across the entire banking sector in New Zealand. The formation of Kiwibank along with New Zealand Post’s pursuit of more international markets, increase in direct mail volumes and investment in technological innovations to lower costs meant the company’s  profits increased throughout the 2000s: 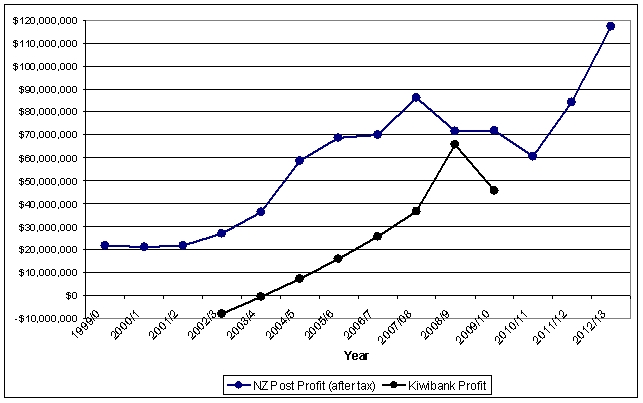 In Britain there is an extensive network of over 12,000 post offices. Some have already merged with bookseller WH Smith branches, proving that postal centres can be multipurpose. Combining existing post offices with a Post Bank could increase foot-traffic into these outlets and increase the use of postal services.

In New Zealand, Kiwibank took over the financial functions of the post office such as bill paying. A Royal Mail-owned bank could do the same as well as being the outlet for pensions and benefits to be paid into (replacing or expanding the current Post Office Card Account). The 2009 New Economics Foundation report also suggests a ‘Universal Banking Obligation’, similar to the current Universal Postal Obligation, which would take advantage of the reach of the Post Office to ensure that no consumers were excluded from banking services.

Competition on price and trust is sorely lacking in the UK high street banking sector, and a Post Bank would capitalise on this; the Post Office is already highly trusted by consumers and a bank would reap this trust with a similar inflow of savings as occurred in New Zealand. Similarly we could expect that high street banks would have to lower their fees and offer better credit to consumers- making everyone better off.

A Post Bank would also act as a focal point for economic recovery and justify government’s initial investment Low-income bank customers (who currently pay high bank fees or are taken advantage of loan sharks) would be better off and taking people out of financial exclusion would reduce the cash economy. Post Banks would also be sources of locally based affordable credit for small businesses which would help to drive economic recovery in small communities.

Citizens are already familiar with banking at Post Offices, as the organisation currently provides banking services through the Bank of Ireland. This split recognises that financial services are not the core business of the Royal Mail. A new bank, under the ownership of Royal Mail, situated in Post Office premises and with similar (but distinct) branding would be a viable alternative.

In Britain we are already halfway towards a Post Bank as the present government owns substantial banking assets from their bailouts, including the nationalised Northern Rock. The government also runs and owns (the non-lending) National Savings and Investments which has over £98 billion in investments and has seen substantial inflows of money since the banking crisis as consumers turn to a zero-risk, fees-transparent, trusted institution to save with.

The Department of Work and Pensions (DWP) secretary Iain Duncan-Smith recently announced the set up of My Home Finance, a scheme run between the DWP, housing associations, the Wates Foundation and the Royal Bank of Scotland, which will tackle loan sharks by providing small sums to high risk lenders. It aims to advance 150,000 loans to low- incomes customers by 2020. This scheme would fit well within a Post Office Bank’s remit.

The New Economics Foundation report suggests that the initial capitalisation for the bank could come from general bond issues and issues to local communities and/or staff to enhance local ownership, as well as funding from government programmes aimed at tackling financial exclusion. Capital from the sell-off of Northern Rock and other banking assets might also be utilised. Ensuring that the bank’s Basel III obligations were met (7 per cent of common equity) would be easier for a Post Bank than other banks as it would have access to capital from Royal Mail, and at a later stage, the possibility of a limited rights issue.

Using Kiwibank’s as a model, the Post Bank would grow slowly, using a large amount of existing facilities and staff. Capital requirements would rise in the initial few years of operations but customer growth and revenues from the takeover of the Royal Mail’s bill- paying and other financial services would cover some of these costs with government providing the remainder. The Universal Banking Guarantee as well as the potential to expand its market reach to retail customers (especially small businesses) through a large number of branches would help ensure the Bank enjoyed high transaction volumes and revenues. Any profits could be ploughed right back into the Royal Mail.

Like Kiwibank, the UK’s Post Bank would be protected by government ownership from the vagaries of the overseas money markets; obviating the risk caused by high street lenders mixing investment and retail banking in recent years. Government protection and backing would also prevent pressure from ratings agencies. Earlier this year Standard and Poor’s rated Kiwibank at AA- due to its unconditional guarantee from New Zealand Post. Interestingly, any privatisation of Kiwibank would likely cause a review of its credit rating.

Stringent regulation by government of the new bank, which could also include National Audit Office oversight, would prevent ‘gaming’ and would prevent staff and management from trying to gain rewards at the expense of their customers. The ‘John Lewis’ style partnership proposed for the Royal Mail, and possibly extendable to the new bank, would also encourage staff to behave more responsibly.

The next step forward is to combine the UK’s existing schemes and the functions of Royal to set up a Post Bank with a corporate style management structure. The capital invested would provide significant social and economic returns at a critical time in the UK’s recovery from recession.