On the issue of what currency an independent Scotland would have, Alex Salmond faces a difficult dilemma, writes Stuart McAnulla. He could climbdown and put forward a ‘plan B’, thereby allowing the ‘Better Together’ campaign to exploit his change in position. On the other hand, if he holds firm in his current stance Salmond faces the risk that the currency issue, which is seen as a key weakness, may dominate the remainder of the referendum campaign.

Much has been made of Alex Salmond’s failure to out-perform Alistair Darling during their first televised debate on the Scottish referendum. It is true that Salmond missed some opportunities to grill his pro-union rival, instead asking some rather eccentric questions. Yet what was clearly more damaging for Salmond was his failure to spell out a ‘plan B’ on currency. He repeatedly declined invitations to explain what his second preference would be if his plans for a currency union with the rest of the UK are rejected.

However, Salmond’s difficulties on the issue derive not from any particular mistake that he made during the debate, but rather from his currency policy itself. He argues that a currency union with the rest of the UK would be in the economic interests of all concerned, and that he will not promote other options in advance of post-referendum negotiations on the issue. The Scottish Government’s white paper on independence lists four possible options for Scotland’s future currency, and of these only the possibility of joining the Euro has been ruled out. The Scottish National Party (SNP) leadership has made clear its determination to ‘keep the pound’. Whatever the actual merits of this policy are, it creates political problems for the ‘Yes’ campaign.

Salmond only wishes to discuss and defend his currency union plan, which he argues the unionist parties will ultimately accept in the event of a ‘Yes’ vote. Yet the unionist parties themselves remain adamant that they will not agree to such a plan. Salmond is thus asking the Scottish people for a high level of trust. He suggests that people should not only believe him on currency, but they should also accept his view that all the other main parties are lying on the issue. Of course many SNP supporters would happily subscribe to this perspective. Indeed it fits with the broader ‘Yes’ campaign narrative of unionist parties conspiring against the interests of Scotland. However, other voters may not be quite so willing to accept that only Alex Salmond and his followers are being sincere in this debate. 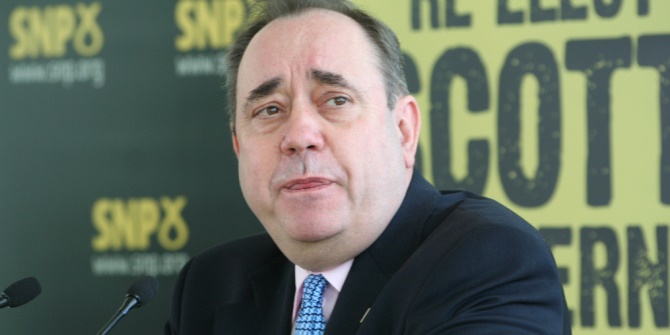 In simple terms the argument of the other parties is that if Scotland becomes an independent country then it should become responsible for administering the currency it uses. This is not an obviously unreasonable position and in fact appears to also be the preference of some prominent independence supporters. For example Denis Canavan, chair of the advisory board for the ‘Yes’ campaign, has stated that he personally would prefer an independent Scotland to have its own currency.

However, Salmond maintains that following a ‘Yes’ vote in Scotland, the other parties will be forced to admit that it will be in the UK’s best interests to have a currency union, thereby avoiding the kinds of transaction costs that would otherwise arise in trade between Scotland and England. He has even threatened that if a currency union deal is not agreed, Scotland would be under no obligation to pay its share of the current national debt. Yet, if Salmond cannot persuade people that the position of the other parties is a straightforward bluff, then the pressure on him to clarify a ‘plan B’ on currency will only increase as the referendum date draws nearer. It will be argued that any currency plan that might realistically be adopted by an independent Scotland ought to be discussed and scrutinised in advance of the vote.

This leaves Salmond with a dilemma. If he now backtracks and makes his ‘plan B’ explicit, he knows that the ‘Better Together’ campaign will exploit this change in position. It will also precipitate many follow-up questions about the credibility of whatever ‘plan B’ happens to be. However, if he holds firm to his current stance, Salmond faces the risk that the currency issue may dominate the remainder of the referendum campaign. Other issues may become crowded out as the pro-union parties relentlessly target what they see as a key weakness in the opposition.

The ‘Yes’ campaign have many several factors working in their favour for the referendum. The Conservative-led UK Government is deeply unpopular, the Labour Party is still relatively weak in Scotland, and the Liberal Democrats have been discredited by their role within the coalition. The SNP hold a majority in the Scottish Parliament and Alex Salmond is clearly the most popular party leader. The current era of austerity and widespread antipathy towards political elites offers opportunities to those promising a new kind of politics in Scotland. However, if the ‘Yes’ campaign are going to better exploit these conditions in the final few weeks of the campaign, they may need to adjust their currency position. It would be ironic if the opportunity to achieve Scottish independence were lost by a dogged determination to insist on a currency union with England.

Note: This article gives the views of the author, and not the position of the British Politics and Policy blog, nor of the London School of Economics. Please read our comments policy before posting. Image credit: Ewan McIntosh CC BY-NC 2.0

Stuart McAnulla is a lecturer in British politics at the University of Leeds. 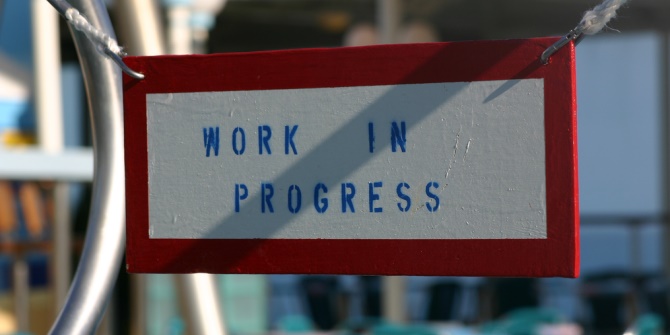