As both the Conservatives and Labour are confronted with ideological and organisational divisions that undermine their efficiency and jeopardise the foundations of the responsible party model, Caroline Close writes that understanding how (old and new) values, ideas and conception of democracy affect party members’ relationship to their party, within and beyond the legislative arena, is more important than ever.

Divisions within the two main British parties have attracted considerable attention in recent months, although they are not new. ‘Bremain/Brexit’ divisions within the Conservatives remind us of the polarization of Thatcher’s party over Europe, followed by John Major’s failure to present a united party at the 1997 election as a result of this, which cost the party one of its biggest defeats in the 20th century. Turmoil within the Labour party over Jeremy Corbyn’s leadership nomination has put into question the value of intra-party democracy, which was aimed at diluting old Labour factional rivalries, but which seems to have created new lines of divisions, between the parliamentary elites and the party’s extended grassroots. These present cases of divided parties call for a general discussion of party cohesion, from a normative, descriptive and analytical point of view, and based on comparative analysis.

The cohesion of political parties is an important requisite for the good functioning of parliamentary democracies, as theorised by the Responsible Party Model. Party cohesion ensures government’s survival and ability to implement clear policies, while a divided party usually performs badly at elections. Ideological or programmatic cohesion is an essential condition for voters to hold their government accountable, and to make effective electoral choices. Indices of parliamentary party voting cohesion within European parliamentary democracies usually indicate high levels of unity. Yet, political parties have never been monolithic structures. Behind public appearances of unity, intra-party decision-making processes (related for instance to policy development, organisational reforms etc.) usually involve various intra-party actors whose preferences and interests might diverge. Dissensions can be seen as a sign of intra-party diversity, and the process of consensus building across these diverging views as a democratic ideal. Thus, from a normative perspective, both intra-party cohesion and dissension fulfil functional roles in parliamentary democracies, to the extent that dissensions are contained and do not threaten a party’s vote, policy, and office-seeking goals.

But what do we mean by party cohesion? Throughout the literature, party cohesion has been used to refer either to individuals acting in a coherent way (e.g. MPs voting coherently on a policy proposal, party members agreeing on one leader), or to a force that binds these individuals together (e.g. party members’ loyalty to their leader, to their party organisation or to the party ideology, which might either overlap and reinforce each other, or conflict). Cohesion can be either of an ideological nature, such as members sharing similar policy positions, or built on common interests, such as party members supporting a leader that they deem efficient rather than because they share her/his ideas. The most studied form of cohesion is the voting cohesion of the parliamentary caucus[i]; but it can be examined throughout the party, between different groups or branches: legislative caucus, central party staff, grassroots members, affiliated unions, local and regional party branches etc.

A striking feature of current divisions in the British parties is that they appear within the party-in-public-office, and between the party elites and grassroots at the same time. In the Conservative case, party officials openly disagreed on the Brexit option; and, as highlighted by Tim Oliver, while a majority of Conservative MPs were backing the remain option, a majority of the party’s voters supported the exit option. In the Labour case, the nomination of Corbyn first started with MPs supporting different candidates, and then revealed important discrepancies between the party’s grassroots backing the radical left candidate, and the parliamentary caucus deeming him too radical to lead the party efficiently, and trying to overthrow him (see discussions hereand here).

A final line of questioning pertains to the factors affecting party cohesion, as cohesion varies across time, countries and parties, but also across individuals. Figure 1 highlights country variations, by comparing two dimensions of legislative cohesion: the frequency of disagreement between an MP and her/his party as stated by MPs, and the intended voting behaviour of the MP in case of such disagreement (loyalty to the party line versus loyalty to her/his own opinion). The bars account for the proportion of MPs per party.

First, figure 1 suggests that the two dimensions of cohesion are linked: generally, parties with lower percentages of MPs who often disagree have also higher scores in the variable measuring party loyalty. Second, although party cohesion is often seen as a central feature of European democracies, when examining what MPs think rather than what they do, levels of cohesion show greater variations. MPs in Spain and Ireland show very cohesive attitudes, while those in Swiss, Italian, French and British parties tend to show more dissenting attitudes.

Explanations for this and other forms of party cohesion can be contextual or socio-historical, can play at the macro institutional or individual level, and can pertain to sociological or rational processes. Party-level factors of cohesion have been less often considered or merely used as control variables, although, I argue, they probably account for important variations in parties’ level of cohesion. These include party size, as arguably larger parties should be more prone to divisions and factions, party age, with more institutionalised parties having higher levels of cohesion, as well as organisational statutory rules and procedures to screen MPs’ activities or to encourage party members’ fidelity (e.g. special privileges, access to voting rights in intra-party procedures etc.). If several works have considered the effect of candidate selection rules on MPs’ propensity to dissent (see, for example, here), the effect of intra-party democracy broadly speaking on diverse forms of cohesion remains barely understood. This lack of understanding may have misled the proponents of recent reforms of leadership selection processes that seem to cause so much trouble in the Labour party since the end of the Blair era.

There is a final factor which should, in my opinion, attract more attention: the party’sfamily, which relates to both the genetic and ideological components of a party, and allows testing the effect of party ideology beyond a simple left-right or policy issue approach. In a recent article, I examine the effect of party family on MPs’ propensity to remain loyal to their party in case of disagreement (see data above), and demonstrate the existence of a party family effect that goes beyond a mere distinction between parties of the left and parties of the right. As illustrated by Figure 2, there seem to exist a fundamental opposition between two families (even after controlling for other of-cited factors of legislative cohesion, as shown by the multivariate analysis presented in the article): the green family, in which MPs tend to adopt a trustee style of representation, and the radical right family, where loyalty to the party (or party leader?) seem to be highly valued. I explain these findings by the specific values carried out by these parties, which are shared and embodied by their members, and which have percolated into specific organisational structures that in turn may shape parliamentarians’ attitudes towards their party.

Whereas both families emerged in the 1960s-1970s as a reaction to the failure of the modern representative system, they crystallised on two opposite sides of the New Politics cleavage or new cultural conflict. The green project promoted, at the individual-level, the values of self-fulfillment and self-affirmation. At the party organisational level, these values translated into the promotion and implementation of more participatory devices, which might have encouraged the expression of intra-party diversity. Radical right parties, to the contrary, re-affirmed the values of tradition, law and order, which seems to be translated in MPs’ high loyalty; and promoted authoritarian forms of government even within party organisations, which built around a charismatic leader.

Obviously, New Politics values have percolated within other families, as illustrated by recent trends towards the democratisation of intra-party processes of decision-making, but also by some forms of ‘presidentialization of politics’. In a time when the two central British parties are confronted with ideological and organisational divisions that undermine their efficiency as governing and opposition parties and jeopardise the foundations of the responsible party model, understanding how (old and new) values, ideas and conception of democracy affect party members’ relationship to their party, within and beyond the legislative arena, appears crucial.

Note: this post is based on the author’s article Parliamentary party loyalty and party family: The missing link? available here. It first appeared on the Democratic Audit blog.

Caroline Close is a postdoctoral researcher at the Université libre de Bruxelles (Department of Political Science) conducting research on the causes of intra-party divisions (funded by the Belgian Funds for Scientific Research – FNRS). 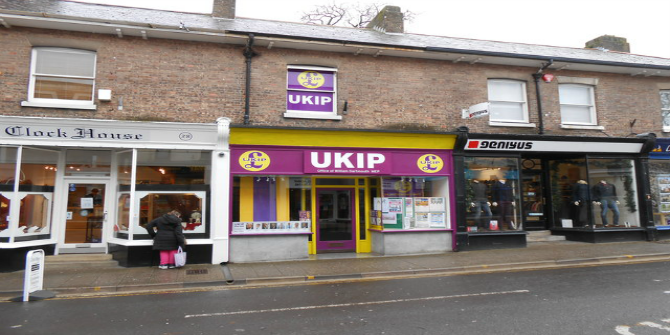