The people serving at power’s elbow: Who they were, what they did and how they operated

The people serving at power’s elbow: Who they were, what they did and how they operated

A new book by Andrew Blick and George Jones, At Power’s Elbow, examines the people that have served as assistants to prime ministers. This article provides a summary of the main themes and some answers to questions that are explored in detail in the book.

Our new book is about the characters who formed the network of assistants to prime ministers – who they were, what they did and how they operated. As long as there has been a prime minister, he or she has depended on the help of a cast of supporting actors. Although the ideal aide is said to be discreet, inconspicuous and prudent, the reality of both scandal and acclaim has often burst through.

At Power’s Elbow tells their story for the first time, ranging from the early media-managers and election-fixers of  Walpole, to the teams supporting the wartime premierships of David Lloyd George and Winston Churchill, to the semi-official ‘Department of the Prime Minister’ established under Tony Blair, and to David Cameron’s apparent shambles. Here are some questions and answers to draw out its main conclusions.

What is the main theme/argument of the book? 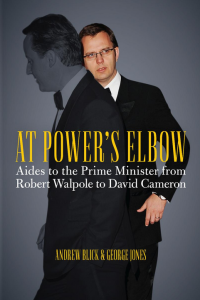 The office of Prime Minister is a group enterprise. Prime ministers have always needed aides, and could not do their job without them. However, aides can sometimes be associated with ructions and political controversy. The precise way in which aides are used is determined by each particular Prime Minister. In the early years, prime ministers had their own department, the Treasury, to support them. Since the mid-nineteenth century, they have not had a department, though Tony Blair came closer than anyone else to setting up such an entity. A Department of the Prime Minister is often proposed today to replace the fluctuating and loose network of personal advisers, but it would cause tension inside the Government with ministers and civil servants, deprive prime ministers of flexibility, limit their personal leadership and undermine the vital institution of Cabinet and its collective consideration of public policy.

What lessons should be drawn from the book?

Which aide had the most influence?
Norman Brook, who was Cabinet Secretary, Permanent Secretary to the Treasury and Head of the Home Civil Service, all at the same time. He combined the skills of the courtier (establishing close relationships with successive prime ministers: Attlee, Churchill, Eden, Macmillan) with those of the master-bureaucrat adept at manipulating the administrative machine. Political leaders in both central and local government need a Brook.

Which were the most successful partnerships of prime minister and aide?
Walpole and his secretary to the Treasury John Scrope were very successful in helping establish the post of Prime Minister in the first place.

Disraeli placed an enormous amount of trust in his secretary, Montagu Corrie, and the pairing proved effective.

Lloyd George and his Cabinet Secretary, Maurice Hankey, were successful in introducing a more formalised system of Cabinet government which helped turn-around the First World War for Britain. This model has been undermined in recent years and should be restored.

Which aide proved the most damaging for a prime minister?
Marcia Williams was very disruptive for Harold Wilson, draining him of energy and poisoning relationships within the team of his aides. William Armstrong became too identified with Edward Heath and his policies and had a breakdown, so too did the Government. Damian McBride was a disaster for Gordon Brown and had to be sacked after being exposed seeking to smear Brown’s opponents. Andy Coulson was a similar handicap for David Cameron: now facing criminal prosecution over the hacking scandal.

For anyone seeking to serve a prime minister what advice would you give?
Make yourself useful. Expect to be a target for those who dislike the Prime Minister. Expect to work hard. Be flexible. If you are a career civil servant, do not become too attached to a particular prime minster or the policies they pursue. Don’t let the power go to your head: never fool yourself you are a power in your own right.

What role should civil servants play in assisting a prime minister?
Handling the Whitehall machine, by filtering its advice to the prime minister and ensuring things get done. Also providing advice from an impartial, non-partisan perspective, and performing a range of tasks such as liaising with the Palace and dealing with intelligence matters, which are less appropriate for partisan appointments and need the utmost discretion.

Should aides have powers to instruct civil servants?
This system seemed to work well under Tony Blair from 1997-2007, when his two most senior special advisers, Alastair Campbell (who left in 2003) and Jonathan Powell (who stayed throughout the Blair premiership) had these powers.

To whom should prime ministerial aides be accountable?
To the Prime Minister: the person who holds this post is the boss, and the only person who can be held responsible for what they do.

How far should prime-ministerial aides be accountable to Parliament?
If Prime Ministers are directly involving themselves in a particular policy area, aides helping them in this area should be liable to provide evidence to the relevant parliamentary select committee, subject to the usual conventions (ie: Osmotherly rules).

Should the advice of aides be made public?
Increasingly it is – to public inquiries, and under the Freedom of Information Act 2005. If all advice were made public, however, prime-ministerial aides would simply provide it by means which could not be made public, eg: oral briefings.

Are prime ministers better off without spin-doctors?
They obviously think not, since probably every prime minister since the time of Walpole onwards has had a spin doctor of some kind. The media would soon complain if there were no-one at No.10 with the job of feeding them stories. But spin doctors can prove destabilising for the government, and can become the story, at which point they lose value.

George Jones is Emeritus Professor of Government at the London School of Economics, where he was on the staff in the Government Department for many years. Amongst a range of research interests, including UK local government, Professor Jones is a leading expert on the evolution of 10 Downing Street and the workings of the British core executive.

IPPR’s report on the civil service starts a useful debate, but needs a much more informed and critical examination

The first minister is forced out of the Cameron-Clegg team – does it fit recent trends in ministerial resignations?