Tiago Carvalho, Nuno de Almeida Alves, David Cairns and Ana Alexandre report on recent mass street protests in Portugal against the government’s painful austerity programme. These demonstrations, with the most recent instance estimated to encompass one million people across 40 towns and cities, have emerged as a consequence of longer standing social movements which have sought to overturn a broader trend within Portugese society towards the growth of precarious working conditions, where low pay is coupled with little employment protection.

On March 2nd the Portuguese people once again took to the streets in towns and cities across the country. These demonstrations were directed against the iron grip of austerity in which Portugal has been held by the centre-right coalition government, itself having been increasingly squeezed by the IMF, European Commission and European Central Bank Troika during the last two years. The March demonstration was organised by left-wing citizens’ groups from various sectors of the economy, encompassing a broad spectrum of people from different socio-economic backgrounds and age groups, to call for the dismissal from office of the current government and new elections. It was estimated by local media that at least one million people were on the streets in more than 40 towns and cities. In this post, we focus on observation of the young people we have been studying in our ethnographic case studies, conducted as part of the MYPLACE project, particularly Precários Infléxiveis (Inflexible Precarious Workers) and the Assembleia Popular Barreirense (Barreiro Popular Assembly).

Precários Inflexíveis was born as a social movement, with the aim of reversing the growth of precarious working conditions within the labour market. Although their chief concern is with young people, the scope of their actions involves precarious workers of all ages. Precarity, especially among youth, has been one major theme of debate in Portugal, and can be defined by the lack or inexistence of employment protection, or even a contract, along with the obligatory low wages. While deregulation of labour markets is often cited as an economic necessity by economists and politicians, for young people themselves this can entail a period of insecurity which lasts well into adulthood. Therefore, this feeling of precarity and an inability to plan for the future pervades non-economic spheres of life, including thoughts of starting a family of one’s own.

This movement started among the organisers of the Mayday demonstrations in 2007 and has its roots in prior student activism against some of Portugal’s traditional but personal degrading academic traditions, such as the initiation rites foisted on students when entering university. In 2012, the movement evolved into a formal association, with a board of directors and members. The organisation continues to be horizontally structured with no hierarchies in the process of decision-making.

Their activities incorporate various types of actions contesting the political acceptance of precarity in the Portuguese labour market, which unites a diversity of workers alongside the unemployed and migrants. One of their main objectives is to “build a collective identity based on precarity”, so that people can begin to be aware of their status as precarious workers who are not alone in this situation. This group is also focused on fighting the Portuguese government’s austerity measures, which have exacerbated precarity and sustained mass youth unemployment, with the eventual objective of building a new social order.

Their actions focus particularly on four groups of workers: those in any kind of flexible temporary position, where this can become a “permanent” situation; involuntary freelancers (known colloquially as “recibos verdes” or green receipt workers); employees of Temporary Work Agencies and other similarly employed temporary workers; and grant holders (“bolseiros”) within tertiary education institutions. The association provides information, legal aid and an online simulation of how social security payments to the precarious workers are organised. More recently in association with a cultural group (crew hassan) they have opened a “Bar” (MOB) in one of the most frequented areas for Lisbon nightlife (Bairro Alto) where they host debates, concerts and other cultural activities. This space also serves as a meeting point for various activists.

The organisation combines formal and informal politics. In the first case, this includes contacts with the formal institutions of the Portuguese representative democracy and civil society (Parliament, Political Parties, Trade Unions), legislative initiatives such as the development of a citizens’ proposal for a “Law against Precarity” and finally debates with guest speakers. In regard to informal politics, they convey their message through a constant presence in the public sphere with their website and weblog, along with mock auctions held at the doors of the Social Security agency and different types of flashmobs.

The other group we are studying is a smaller group (the initial group and contacts with several others is situated in Barreiro1, one of our fieldwork sites for MYPLACE and a post-industrial district with a strong tradition of workers’ activism). This group started at the end of 2011 after several public demonstrations and several public assemblies near Lisbon, with two or three people trying to bring the idea to Barreiro. They held their first assembly in December of 2011 and stopped in March 2012, continuing their activities in other ways. In our most recent interviews, they stated that although their activities are less regular than in the past they are still able to sow the seeds of activism in Barreiro. Their objective was to experience “Grassroots Democracy” in an informal and horizontal organisation, opposing austerity measures, but also experiencing forms of squatting. Nowadays, their most active group is to be found at the local allotment that revolves around a social project that tries to involve the local community, with a focus on environmentalism, experimentalism, local activism and occupation.

What is particularly interesting about this group is its embeddedness in the Barreiro context. The group emerged here and is connected with a network of cultural and political groups, constituted by small groups of people that share certain goals, which in turn creates and reinforces a sense of community. In this way we are able to observe how the industrial past, as a political legacy, is being recreated inside a more globalised context, with new meanings and cultural forms.

These two groups are close in some aspects, although their engagement and public visibility are different. We can find similarities in the level of higher education achievement, interest in politics, strong connection with cultural activities (normally it is a very important activity for most, if not all, and that is why the recreational spaces we find in our ethnographies are so important as they serve as locales for both political and cultural activities). Most individuals belong to several groups and are engaged with various causes relating to areas such as the environment, youth, the struggle against austerity, unemployment and inequality. This is not a surprise since previous research in Portugal tends to show that the groups who participate actively share this profile, which is rooted in historical and socio-economic background patterns. The project will therefore help us to sketch how this most prominent group of citizens organizes itself in a context of crisis involving collective action in Portugal. 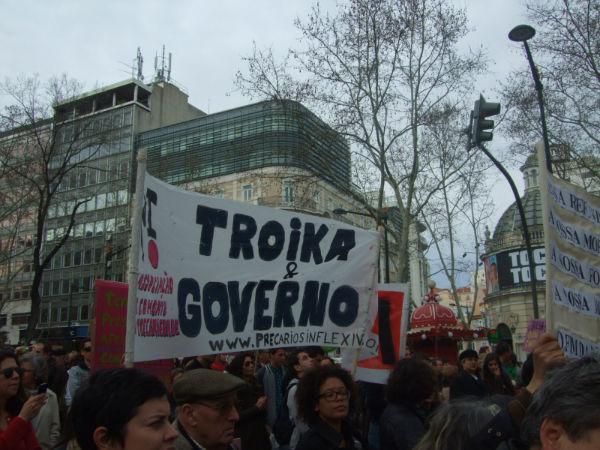 Returning to the March 2nd demonstration, preparations began at the end of last year, with the announcement of the date made at the beginning of 2013. This date was chosen because the organisers knew that the Troika representatives would be in Portugal and new austerity measures announced. We were able to observe the intimate details of the preparations at MOB, which served as headquarter for meetings, drawing of banners, painting of placards, etc. (not only from the group but also a group of students that have a strong connection with the group) and, also, after the demonstration, be among the most active demonstrators who met there to celebrate. We were able to observe a lot of activists, from different generations, engaged in these activities. In Barreiro the members of the group organised the display of posters around the city, the distribution of pamphlets and a group at the demonstration, although not part of the organisation as was the case with various members of Precários inflexíveis.

Tiago Carvalho is part of the Portuguese team team in the European Commission funded research project MYPLACE (“Memory, Youth, Political Legacy and Civic Engagement”), based at the Centre for Research and Studies in Sociology at ISCTE-IUL. His main research interests are social classes, citizenship, youth and culture.

Nuno de Almeida Alves is co-leader of Portuguese team in the European Commission funded research project MYPLACE (“Memory, Youth, Political Legacy and Civic Engagement”), based at the Centre for Research and Studies in Sociology at ISCTE-IUL. His main research interests are knowledge society, education, youth and inequalities.

David Cairns is co-leader of Portuguese team in the European Commission funded research project MYPLACE (“Memory, Youth, Political Legacy and Civic Engagement”), based at the Centre for Research and Studies in Sociology at ISCTE-IUL. His main research interests are in the area of youth, migration and geographical mobility, and most recently, the impact of the economic crisis.

Ana Alexandre is part of the Portuguese team team in the European Commission funded research project MYPLACE (“Memory, Youth, Political Legacy and Civic Engagement”), based at the Centre for Research and Studies in Sociology at ISCTE-IUL. His main research interests are youth and sociology of work and organization.

The report into the regional economic impacts of HS2 is worrying

Nuclear power is not the solution to the UK’s energy security problems, particularly not in the form of the Hinkley C plans