Barbara Wootton was one of the most extraordinary public figures of the twentieth century, influencing the formation of the welfare state and pushing the boundaries of women’s representation in government and education. Tamara Micner considers Ann Oakley’s recent account of the life and work of Wootton to be relevant and animated, but more detail in some parts would have been welcome. 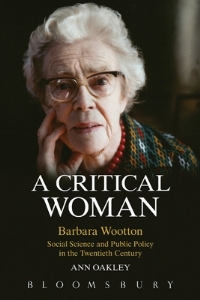 Barbara Wootton was the first Deputy Speaker in the House of Lords. She was among the first four women to be made life peers. She was the first woman to give university lectures at Cambridge. The first woman to be a member of a national policy commission. Yet few of us know about or remember her achievements: why? A Critical Woman: Barbara Wootton, Social Science and Public Policy in the Twentieth Century, by Ann Oakley, seeks to honour this twentieth-century pioneer and brilliant mind. Oakley, a professor of sociology and social policy at the University of London, contextualises Wootton’s life as an academic, economist, socialist, public-policy advocate and Baroness. She weaves the individual and the social to show how her life both shaped and was shaped by her time. Ultimately the book succeeds in proving Wootton’s achievements to be remarkable, but leaves the reader with a sense of admiration more than awe.

Both the biography and its subject remain relevant as debates resurface about economic equality (and its lack), social exclusion and education, heated subjects in Wootton’s day alike. Having read economics at Cambridge, Wootton campaigned for economic and social policies based on statistical evidence. Her maiden speech at the House of Lords (and Ladies), during a debate about the Youth Services in 1959, could just as easily occur today. Oakley paraphrases: ‘[Y]oung people were reacting to a world of unequal life chances and a culture of acquisitiveness. It was, she said, so much easier for the policy response to be the provision of more clubs or clinics, rather than the elimination of slums and extended secondary education, which would address the fundamental material basis of young people’s discontent’. Replace ‘acquisitiveness’ with ‘consumerism’, ‘slums’ with ‘council estates’ and ‘discontent’ with ‘social exclusion’, and her points uncannily prefigure our discourse about last summer’s riots.

The book’s most animated sections, to me, recount life at Girton College 100 years ago (having studied at Cambridge for a year, I found the comparisons fascinating). Both her parents were classical scholars, bright ones, and her father taught at Emmanuel College until his untimely death when she was only ten years old. The University’s conservatism and contradictions toward women would echo throughout Wootton’s life. Once Girton students were allowed to cycle the two-and-a-half miles into Cambridge, one was chided for cycling without a hat. They could receive male guests who weren’t immediate family or married uncles only with permission and with a chaperone (‘chap’). And though Wootton would achieve special distinction in economics, as a woman she couldn’t receive a degree.

Oakley convinces us that Wootton was a pioneer who excelled equally as a student at Cambridge, a teacher and administrator in London and a champion of radical politics in the House of Lords for nearly thirty years. Yet I see why we’ve forgotten much of her work. Wootton’s biography, like her life, reads in part like The Protestant Ethic: hard work, diligence, no surprise or scandal. Though she lost her father, one of her brothers, a close friend and her first husband and love in her first twenty years, she simply got on with it. As a Baroness she attended the House of Lords three days a week (the norm when it was sitting). She stayed awake through sessions. She took the position seriously. As Principal of Morley College in London, she had remained on campus during opening hours, leaving her ‘unable to be free any evening’. She dedicated herself to her slew of posts as she did to social equity and reform.

It’s therefore reductive to argue, as Oakley has done in interviews, that we’ve forgotten her because she was female. We may indeed have remembered her more had she been male, but I believe we’d also remember her more if her character were as standout as her accomplishments. She was private, loyal, consistent, hard-working and equanimous, qualities which inspire respect but not fervour. Likewise, perhaps if she’d been an MP, a Cabinet Minister, a vocal member of the Opposition or Shadow Cabinet we’d have more memory.

We remember people partly for their quirks, upsets, scandals—elements which impart their humanity and vulnerability. We remember Churchill his vision but also his charisma, his chauvinism, his drinking. We remember Thatcher as Prime Minister chiefly for her divisiveness, but also for her hats as well as her beliefs. What stands out in Barbara Wootton is her CV—her litany of firsts. We needed and need pioneers like her. Perhaps she had notable oddities which Oakley left out; perhaps not. At times the book does include impressions of Wootton’s manner or appearance, from the papers or from letters. Yet beyond the context of the world in which she lived, I believe we’d remember her more if we knew more details about her (if available). What was in her room in Girton College? What did she eat and wear? I understand why a biographer would emphasise her subject’s actions, but more personal detail would enliven Barbara Wootton and help us remember her.

Just as A Critical Woman weaves the individual and the social, the personal and the professional, so does it hover between the academic and the popular. It reads smoothly, proceeds chronologically and argues clearly. Like Wootton, it’s very serious. The book never mentions it, but Oakley’s father worked with Wootton in the ‘50s and Oakley met her as a teenager. Oakley’s affinity for her is clear and understandable. But she could better animate the figure of a 358-page biography. Specificity makes for good policy, and it makes for a good read.

Tamara Micner studied English at Yale University, and Modern and Medieval Languages at the University of Cambridge. She worked at Google inbetween, and now writes for the theatre, magazines and blogs. She tweets @tamamic and writes about the arts, travel, and food on micner.blogspot.com. Read more reviews by Tamara.