Outlining the evolving institutional architecture of the post-1945 era, Aftermath: The Makers of the Postwar World is a finely researched synthesis that will be useful for historians, diplomats, and international relations scholar, finds Jeff Roquen. Richard Crowder cuts through the highly contentious layers of historiographical debate on the origins of the Cold War and recaptures the context of the monumental policy decisions made on both sides of the Iron Curtain.

Upon taking the presidential oath of office in March 1933, Franklin Roosevelt inherited an unprecedented financial catastrophe and a destabilized world order. While Josef Stalin consolidated the Bolshevik Revolution over the legacy of Vladimir Lenin in Moscow, the new chancellor of Germany, Adolf Hitler, had already begun to methodically seize control of the state from Berlin.  To combat his own fear and uncertainty, Roosevelt, who served under Woodrow Wilson as Assistant Secretary of the Navy, turned to his former boss for inspiration.

On 28 December, FDR not only praised the League of Nations (of which the United States declined membership) but he also echoed Wilson in declaring “I believe that I express the views of my countrymen when I state that the old policies, the old alliances, the old combinations and balances of power have proved themselves inadequate for the preservation of world peace.”  In Aftermath: The Makers of the Postwar World (2015), Richard Crowder delivers an exceptionally well-written account of how the United States and the United Kingdom attempted to realize Wilson’s dream of establishing an international system based upon international law and collective security.

According to the author, the struggle to create a sustainable new framework to meet the demands of an increasingly globalized economy and resolve transnational disputes required a delicate balance between internationalism and sovereignty. As such, Crowder generously outlines the evolving institutional architecture of the post-1945 era from its origins inside the worldwide effort to vanquish Nazi Germany, fascist Italy, and the Empire of Japan over several engaging opening chapters.

Only seven months after Roosevelt famously rearticulated the American commitment to human rights within “Four Freedoms” – the freedom of speech and worship and the freedom from want and fear in his 6 January 1941 State of the Union address, the President and British Prime Minister Winston Churchill held talks in Placentia Bay off the coast of Newfoundland, drafted the Atlantic Charter, and reaffirmed the Wilsonian principles of freedom of the seas and national self-determination.  Would Stalin willingly join the tide of internationalism?  When Cordell Hull, a historically underappreciated U.S. Secretary of State, persuaded his Soviet counterparts to back and participate in a successor organization to the League of Nations two years later, the Moscow Declaration raised hopes in America and around the world for a future defined by cooperation. 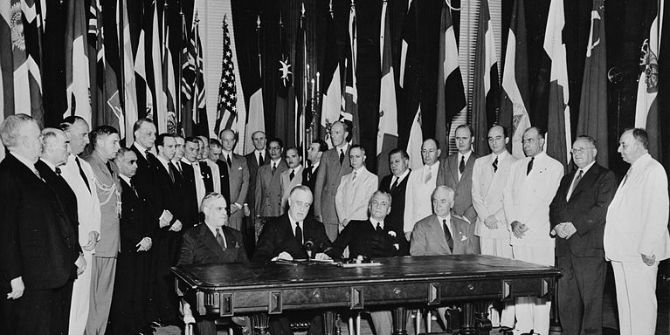 By the time the United Nations opened on 25 April 1945, however, Soviet pledges to uphold international law and respect the sovereignty of other nations had become increasingly suspect. Aside from his virtual control over Eastern Europe through the standing Red Army, the Soviet dictator pressed for influence in North Africa, control of the Turkish Straits, and provocatively refused to withdraw troops from northern Iran until the spring of 1946 – instigating the first major row in the nascent U.N. Security Council. Indeed, the behavior of Soviet Ambassador Andrei Gromyko during the crisis was wholly indicative of the Kremlin’s intentions. Unable to stave off debate on the non-mandated occupation, he proceeded to exit the Council chamber.

Instead of extending his viable thesis to directly expose Stalin’s realpolitik and Machiavellian designs to harness the new international institutions to promote Soviet imperialism, Crowder refrains from following his evidence to its logical conclusion – a conclusion reached by President Wilson nearly thirty years earlier in a reference to Poland: “No peace can last, or ought to last, which does not recognize and accept the principle that governments derive all their just powers from the consent of the governed, and that no right anywhere exists to hand peoples about from sovereignty to sovereignty as if they were property.”  When Soviet Foreign Minister Vyacheslav Molotov nonchalantly informed American Secretary of State Edward Stettinius of the arrest and forthcoming trials of more than a dozen Polish political figures in Moscow only a week after the launch of the United Nations, it demonstrated the nefarious nature of Stalinism and its incompatibility with the signal, guiding ideal of both the U.N. Charter and the international community – human rights.

Of the many narrative accomplishments within the fluid pages of Aftermath, perhaps none is more significant than Crowder’s scholarly dexterity in cutting through or deftly sidestepping the highly contentious layers of historiographical debate on the origins of the Cold War and recapturing the context of the monumental policy decisions made on both sides of the Iron Curtain.  Rather than being drawn into an analysis of whether or not the atomic bombs dropped on Hiroshima and Nagasaki in August 1945 were ethically justified or possessed a geopolitical calculus, the author wisely steers clear of rendering any anachronistic judgments by simply but effectively noting that each and every member of the Interim Committee, a collection of notables charged by President Truman “to analyse the implications of [the] new weapon” (p. 108), recommended its deployment to halt Japanese aggression and end the war in the Pacific.  Conversely, Truman’s decision to back the United Nations in its support of the creation of a Jewish state in Palestine polarized his administration to the point of provoking his temperate, sober-thinking Secretary of State, George Marshall, to boldly tell the President in a meeting among his advisors: “If you follow [White House Counsel Clark] Clifford’s advice [to support Israel] and if I were to vote in the election, I would vote against you.” (p. 228)

While Crowder adroitly navigates through the Truman Doctrine, the Marshall Plan, the Soviet blockade of Berlin, and the founding of the North Atlantic Treaty Organization (NATO), his analysis of the precarious relationship between internationalism and sovereignty is somewhat inchoate in the overly brief summaries of the creation of Israel, Soviet opposition to the Universal Declaration of Human Rights (1948), and in the final chapters of the book.  As a whole, however, Aftermath is a finely researched synthesis that will be useful for historians, diplomats, and international relations scholars in their quest to more fully understand the contours of power and principle in the twentieth and twenty-first centuries.