Nietzsche, the philosopher seemingly opposed to everyone, has met with remarkably little opposition himself. Malcolm Bull argues in his latest book that merely to reject Nietzsche is not to escape his lure. Only by  failing to live up to his ideals can we move beyond Nietzsche to a still more radical revaluation of all values. Igor Stramignoni finds in the current political and economic climate, where the cost of a spreading nihilism is becoming painfully clear to all, Bull’s book is both timely and bold.

Anti-Nietzsche, Malcolm Bull’s latest book, is a daring attempt to turn Nietzsche inside out. Bull imagines what it might be like to live not only in the aftermath of the demise of god, as Nietzsche announced, but also this side of art, this side of culture, that is to say, this side of the one value that Nietzsche regarded to be life-affirming, rather than life-negating, and so to be life itself.

To succeed in such a startling task, Bull proposes to read Nietzsche neither for victory – consciously or unconsciously identifying with the heroes of his multiple narratives – nor like a loser – “making ourselves the victims of the text” (37) – but like a philistine, a sub-human even, within Nietzsche’s own description of those terms.

True, breaking the tables of the law, as Nietzsche urged and both Heidegger and Foucault eventually came to realise, simply won’t do. It won’t deliver us from nihilism. On the contrary, under contemporary conditions, it is likely to further enslave and consume. But Bull’s reading is not merely a refusal to be enchanted, like Heidegger and Foucault had been, by Nietzsche’s strangely attractive world, by the promise of a new dawn and by an ecology of value whereby a few will manage to step out of the anonymous flow of history “back” into an eternally returning present of their own making, while most others will be left to drown. Bull realises such a refusal would not liberate us from Nietzsche’s lingering spell. Instead, a thoroughly negative ecology might be the answer reversing, one might say, the ecology of value-negation supposed by Nietzsche, whose sheer irrevocability quietly draws out the outer limit of nihilism and of the creativity invoked to overcome it. How else to interpret the double-negation so obviously embedded in the very title of this book? Does that title not point toward an anti-anti-philosophy which alone may allow us to take one more step and leave Nietzsche finally behind? In the current political and economic climate, where the cost of a spreading nihilism and the helplessness of certain cultural practices are becoming painfully clear to all, such a seemingly impossible task could not have been a timelier one.

Bull’s astute reading finds in Nietzsche himself the resources to leave him definitely behind. Thus he argues, with Nietzsche, that sense and non-sense are determined by demography and ecology (67–70) but, against Nietzsche, that it may be a matter of time before both sense and non-sense finally disappear into the abyss which Zarathustra had famously warned to be yawning beneath man, that “rope” stretching between animal and Overman. How so? To Nietzsche the abyss is the result of failure, of a naturally unequal society unable to hold on it strengths, a society overcome by the weak where “the highest values devaluate themselves” (The Will to Power, 2, VIII, 9.35). Such a society, typically for Nietzsche an egalitarian society, would lead to the Last Man jeopardising the advent of the Overman and, as such, it is a danger for Nietzsche, not something to look forward to. But what if, Bull asks, we assumed rather than rejected the trajectory of failure feared by Nietzsche and set ourselves in the direction not of egalitarianism itself but further out, as it were, in the direction of “the extra-egalitarian”, “the less than zero” (76)? Or, to put it differently, “could one sacrifice the development of mankind to help a lower species than man come into existence?” (77).

After a complex chapter arguing that, in Heidegger, Nietzsche’s positive ecology of valuation is in fact replaced by an equally positive ecology of Being and so that, pace Heidegger’s critique of Nietzsche’s humanism, the human remains the centre as well as the limit of both Nietzsche’s and Heidegger’s nihilisms, Bull argues how it may be by assuming the trajectory of the failure on which both Nietzsche’s and Heidegger’s accounts must rely, that the structure sustaining nihilism could finally collapse. One can easily recall some signal instantiations of this type of practice in contemporary philosophy – whereby the levelling down of nihilism tips over into a more radical levelling out.

Consider the negative community envisaged by Jean-Luc Nancy and taken up by Alphonso Lingis and Giorgio Agamben. In Nancy, community loses its ontological density and becomes mere co-appearance (compearance) alongside one another, a minimal disposition, a step beyond that becomes a step back, a finitude which, unlike humanity, is ”something that everything shares” (113). Take, too, what Simon Weil, referring to Plato’s “great strong beast”, suggestively called a “society in which only gravity reigned”. Could this sort of failure not have become, in modernity, something subtly different, something more like a failure without a limit, “a form of socially constructed nihilism, a way humans join together to become less than they might otherwise be” (170)? And finally, think of Vincenzo Cuoco’s passive revolution and Antonio Gramsci’s permanent revolution – which, in Bull’s view, is itself a figure of on-going passive revolution – whereby the revolutionaries unite themselves with the people, rather than the people with the revolutionaries. Each of these three key practices, Bull argues, is “potentially a means of arriving at and extending the desert of nihilism, their very limitlessness the model of a permanent revolution spreading out across the empty space of the universe. Seen from this perspective, the world had never seemed so open” (175).

Bull’s offer is intriguing but is it really possible to leave Nietzsche behind in that way? World events such as the fall of the Berlin wall, the attack on the Twin Towers in September 2001, the rise of BRIC, and now the so-called 2008 financial crisis, significantly complicate the relationship of today’s critical thinking with many of its multiple intellectual resources. In that sense, the case of Nietzsche is paradigmatic. The difficulty here is not just that, in the age of technology, biopolitics, and immaterial labour, Nietzsche may have become an icon no longer able to liberate sufficient critical energies but, even more problematically, that Nietzsche may have become only such an icon. That is to say, there may be no “leaving behind Nietzsche” after all, least of all a leaving behind that materialises, as Bull hopes, into a step back into non-humanity, into finitude, into something less than human.

Another, more affirmative possibility may lie hidden in plain view. Badiou argues Nietzsche is someone that one must at once discover, find, and lose. One must discover him in his truth, find him as he who forces us to identify a new rupture with sense, and then lose him, once philosophy has established its own space. The task, that is, may be to look Nietzsche straight into his eyes and know how to lose him.

Dr Igor Stramignoni teaches law, contemporary philosophy and social and cultural theory at the London School of Economics and Political Science, and he is on the Editorial Board of the International Journal of Law in Context. Amongst his most recent publications is a series of essays on the work of Alain Badiou, one of today’s most influential living philosophers. Read more reviews by Igor. 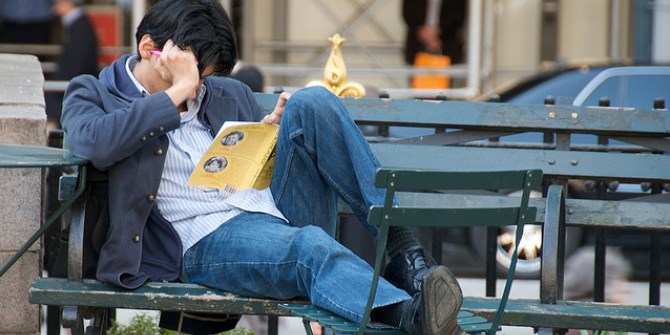