Matthew Partridge finds that Oliver Daddow and Jamie Gaskarth’s strong collection of essays on Blair and Brown’s foreign policy highs and lows is strong enough to justify its place on reading-lists, covering the Iraq, Afghanistan, and the War on Terror. 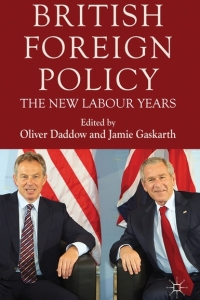 This year’s events have prompted academics, policy-makers, and practitioners to rethink many core assumptions about the nature of globalisation, the stability of dictatorships, and the role of global institutions. However, the most dramatic development has been the way in which the decision by the British, French, and American governments to use military force to remove the Gaddafi regime has vindicated the belief that military intervention can be used to promote human rights.

It is this emphasis on humanitarian intervention that many of the contributors to British Foreign Policy: The New Labour Years, a collection of thirteen articles on British foreign policy from 1997 to 2010, see as the main legacy of the Blair and Brown administrations. Oliver Daddow and Jamie Gasketh note that ‘Tony Blair adopted a moralistic…tone in his language that had not been seen to such an extent since William Gladstone in the nineteenth century’ (p. 5). Tara McCornack also argues that although Kosovo was ‘the high point of New Labour’s ethical foreign policy’ (p.108.), the Afghanistan and Iraq wars, sought to ‘generate a moral leadership role – for itself domestically and for Britain internationally’ (p. 112).

Of course, this doesn’t mean that they necessarily approve of the decisions that flowed from this imperative. In the forward, Stephan Wall argues that British participation in the Iraq War was one of two foreign policy disasters (the other being the handling of the economy), comparing it to Suez. Daddow and Gasketh also argue that the Iraq War paradoxically prevented more clear-cut interventions with ‘subsequent crises in the Darfur, Zimbabwe and the Democratic Republic of Congo … handled at arms length’ (p. 6). Max Taylor goes even further, arguing that Tony Blair’s behaviour was so aberrant that it was worthy of psychological, rather than solely political, study.

However, as well as discussing Iraq and Afghanistan and the Global War on Terror, the articles in The New Labour Years also cover other topics. Patrick Holden reminds readers that although the two administrations agreed to the Lisbon treaty and pushed for more integration in the areas of security and foreign policy, is was not committed to unconditional federalism in all areas. Not only did Britain refuse to join the single currency but Tony Blair’s support of rapid eastwards expansion led to the accession of countries more committed to economic liberalisation and reform than many existing members.

Given that the size of the Chinese economy is rapidly approaching that of the United States (in terms of purchasing power) the editors should be praised for giving space to Kerry Brown’s study of Anglo-Sino relations. An even more imaginative choice is Pauline Schnapper’s article on how devolution had changed foreign policy. Although the controversy over the release of Abdelbaset Mohmed Ali al-Megrahi was the most controversial manifestation of Edinburgh’s intrusion into affairs normally decided by Westminster, Schnapper notes that from 1999, the Scottish Executive began to play an official part at European Council of Ministers meetings.

Although Daddow and Gaskarth’s work is strong enough to justify its place on reading-lists there are still some glaring omissions that limit its usefulness to students. A separate article on the interaction between Britain and Russia, which is only mentioned six times in the entire book, would have been welcome. Britain’s role in attempting to co-ordinate international fiscal and monetary expansion during the financial crisis deserves a dedicated chapter, rather than the two brief pages in Stephen Benedict Dyson’s contribution. As mentioned previously, Max Taylor queries Tony Blair’s mental health, an approach that some may find unsuited to a serious academic monograph.