James Moran reviews an extensively well-researched and thorough book dealing with every level and stage of political campaigning. 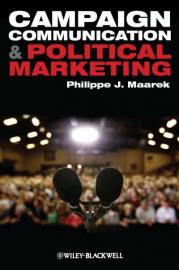 Philippe J. Maarek’s analysis of the structure and development of political marketing is a thorough, if somewhat overly clinical examination of the strategies used by election campaign teams. Maarek, Professor of Information and Communication Sciences at the Paris-East University, has authored various writings on political marketing, though this is perhaps his most comprehensive book on the subject to appear in English.

Maarek is at his best when he describes, with almost scientific precision, a complex system within marketing. During the section on what audience to target during a campaign, Maarek employs a series of clear diagrams to describe the relations between the “transmitter” (a campaign team), the “medium” (TV, radio etc) and “opinions relays” (columnists or television personalities). He moves on to describe how thorough opinion polling must influence said targeting, outlining a detailed summary of socio-cultural categories for different kinds of voters.

Maarek becomes somewhat less precise when he deals with the more cutting-edge aspects of political marketing, particularly the internet. Whilst keen to point out the growing importance of online campaigning – he makes particular mention of Obama’s 2008 campaign – Maarek himself seems to hold the medium at arms length. Younger readers may find references to “iApps” embarrassing perhaps, and Maarek even talks of the internet providing a “quality of communication close to that of the printed version”. One might say this is a somewhat condescending attitude toward the new medium, particularly as online readership rises and the print media enters into crisis.

The book is not the best choice for a reader wishing to read an anecdotal account of the PR men roaming the corridors of power, as Maarek’s writing is academic and serious. This is not to say his extensive and impressive research doesn’t offer many fascinating examples of political marketing strategies. One is the use of subliminal messages by the George Bush campaign team in 2000 – a TV advert showed the word “Democrats” and then the word “Bureaucrats”, in between showing the word “Rats” so quickly as to be nearly invisible to conscious perception. Another is a study by the University of Michigan wherein participants were shown clips of candidates in an election they were unfamiliar with. 58% identified the candidate who later went on to win the election, through first impressions alone.

Though the book is littered with these fascinating examples, Maarek deals very little with the art of political marketing. The author’s approach might be described as scientific, with every stage of a political marketing campaign described with precise subdivisions and diagrams. Maarek rarely gives us an insight into the more creative thinking that goes into political campaigns, and the emotional responses they receive – he cites “Yes We Can” as new high-point in political marketing and explains its coherence within a campaign structure, but he does not go on to describe why the message chimed with so many Americans and motivated young voters so effectively.

This is an extensively well-researched and thorough book dealing with every level and stage of political campaigning. Though full of interesting information about historical political campaign, it lacks a detailed account of the actual creative process of coming up with campaign ideas. However, despite that, Maarek has written an impressive and extensive guide to the structures underlying political marketing.