Neil Stewart warms to Jamie Peck’s geographic approach to the development of neoliberal ideas as he visits Vienna, Chicago, and the LSE, but is left disappointed by the insufficient connections made between theory and policy. 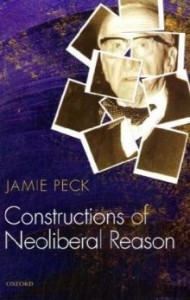 Jamie Peck’s Constructions of Neoliberal Reason is a timely, if not fault-free, examination of the secret history and current manifestations of neoliberalism. These manifestations have direct relevance to Britain in the age of post-crash austerity. Peck, a researcher at the University of British Columbia, is concerned with showing the history of neoliberalism as an economic theory, and how this theory was and is both intellectually and sociologically constructed. Following from this, Peck shows how these unstable and contested versions of neoliberalism have been applied in the real world. Peck is concerned to show the interplay between ideas and events, and how neoliberal ideas have had varying and contingent but very real effects on economic policy and government.

The first half of the book gives fascinating insights into the development of neoliberalism, along a geographical path from Friedrich Von Hayek‘s Vienna to Milton Friedman‘s Chicago, with a short detour via LSE in the figure of Lionel Robbins. By taking this geographical approach, Peck is able to tease out the way in which neoliberal ideas have been both responses to the wider world, as well as rooted in the specific times and places of the thinkers in question. For example, Peck shows that the Chicago School, based at the University of Chicago, developed its ideas as a result of its hothouse atmosphere and opposition to the perceived East Coast Ivy League economics establishment. This revealing use of the sociology of knowledge undermines neoliberal claims to being timelessly truthful.

Peck then shows how the various strands of neoliberalism have been put into practice, using three case studies. The first is an excellent examination of the responses to crises in two cities, first the fiscal crisis in New York in the 1970s to 1980s, and second looking to New Orleans in the wake of Hurricane Katrina. Peck skewers some of the breathtakingly callous responses of right wing pundits to these crises, and particularly to the latter case study. The human disaster of post-Katrina New Orleans was deemed to be the fault of the victims, by neoliberal commentators intent on pushing their own anti-welfare and anti-statist agendas.

The other two case studies, on the use of ‘creativity’ as a cure-all for post-industrial city development, and President Obama’s economic policy, are less successful. In particular, the latter study is a fairly standard take on the limitations of the Obama administration’s response to the financial crisis. The intended message of both of these case studies seems to be ‘neoliberalism pervades all governmental economic thinking’, but the link between neoliberal theory and economic policy seems to be made insufficiently clear.

This problem points to a more general problem with the book, which is that it feels more like a collection of insightful and erudite essays on disparate topics, rather than a coherent book with a single argument. The first half sets you up to think the second half will show exactly how neoliberal ideas have been put into practice, but this doesn’t really happen. Instead Peck writes about what seem to be some of his favourite topics.

Having said this, the book’s strengths outweigh these weaknesses. The first section of the book, concerned with the development of neoliberal ideas, is very thought provoking and provides a much-needed critique of the genesis of this school of economic theory. I would also recommend the book to anyone especially interested in the aftermath of Hurricane Katrina. More generally, the book shows how neoliberal theory has become the main currency of economic thought, and has framed the way policy and politics are practiced, on both sides of the Atlantic. It’s just a pity that Peck doesn’t follow this demonstration up with a better analysis of current strains of neoliberal policy and politics.

Neil Stewart is an assistant librarian at LSE Library.