Can right wing tabloids influence social policy using their ability to fan fears and prejudices? Malcolm Dean explores the relationship between the press and policy making in Democracy Under Attack, noting that the failure of serious academic analysis to penetrate the mainstream media could be held partly responsible for the distortion of social policy in the press. 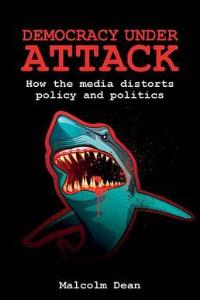 With more than 35 years in national newspapers under his belt, including two decades as editor of the Guardian’s Society section, Malcolm Dean has had a ring-side seat as journalism morphed from observer into political player.  The five years that Dean subsequently spent researching and collating this book shows in the breadth of subjects and some of the detail of the case studies, from the media campaign against asylum seekers to Labour’s pledge to end child poverty, the advance of penal populism to the decline of vocational education.

The book is predicated upon the notion that the media distorts policy by being negative, dumb, adversarial, stupid, and by hunting in packs. Some of this criticism is familiar. But the case studies are factual and wide-ranging, with some fascinating detail. Tony Blair’s pledge to end child poverty, for instance, appears to have been slotted into a speech late in order to deliver a front page headline to the Daily Mirror.

The pledge was then undermined by the politics of election: Labour felt compelled to  reassure the electorate by promising not to raise taxes as it went into the 1997 election . It’s a useful reminder that the media might influence politics, but it doesn’t necessarily drive it. Ultimately it is the politicians who call the shots. Dean notes, for instance, that only three national daily newspapers fully supported a tax-funded health service by 1999 – yet 11 years later, all three main parties went into the general election promising to maintain a fully taxpayer funded NHS, and after the largest increase in funding in its history (and at the same election the Conservatives failed to win an outright majority, despite having the enthusiastic support of all the papers bar the Mirror, Guardian/Observer and Independent). Dean also places the blame for the rise in penal populism over the last two decades “at the feet of politicians rather than the press, although the tabloids have been eager accomplices”.

Tony Blair’s decision in January 2000 to announce in a breakfast television interview that UK spending on health would equal the EU average within five years is instructive. It was driven in part, Dean notes, by the terrible NHS ‘winter crisis’ headlines and the death of Mavis Skeet after her throat cancer operation was repeatedly cancelled because there were no intensive care beds for her. But it was also motivated by wrangling between warring ministers, which prompted the Prime Minister to want to bounce the Chancellor into a higher spending increase. The precise pledge made by Mr Blair appears to have been impulsive: in a delightful detail, Dean reports that the Department of Health Chief Economist received a call from No 10 hours after Mr Blair had made the promise, asking how much it would cost.

Where the book disappoints a little is in the lack of detail about Dean’s own experience in the front row, both as journalist and editor, and as special adviser to the Secretary of State for Health and Social Security during the Winter of Discontent. As Dean modestly notes, the Downing Street media director tried to block his appointment, “suggesting that I might be of more use to the government outside writing sympathetic leaders in the Guardian than inside providing policy advice. He might have been right.” Dean offers barely a glance at his experience at the centre of government in the midst of the turmoil of the Winter of Discontent: perhaps he didn’t bring his notebook to Whitehall.

In the end, the book leaves a challenge to academia as well as to journalism. While the media distorted, and lied, and over-simplified, where were the academics? The failure of serious academic analysis to penetrate the mainstream media could be held partly responsible for the distortion of social policy which Dean recounts. Dean notes with understandable pride the success of the Guardian’s ‘Society’ section, which at its peak grew to 160 pages, 146 of them stuffed with advertisements for public sector jobs. At one time the Wednesday supplement provided a third of the Guardian’s entire income. “Various papers – The Times, The Sunday Times, The Independent – tried to break into the market, but they had left it too late. The Guardian had captured 85 per cent of nationally advertised education jobs and 86 per cent of all other public service jobs in the national daily press.”

Democracy Under Attack is a book to dip into. It veers a little dizzyingly from subject to subject: from the political use of law enforcement issues in the US in the 1960s, to the ‘Winter of Discontent’; from Myra Hindley to the European Convention on Human Rights to criminological content analysis. In one two-page journey, Dean moves from Nacro’s media strategy to the Criminal Justice Act 1982, through the Prison Reform Trust and Howard League for Penal Reform, to Willie Whitelaw and the British Crime Survey. It skids into an optimistic ending, noting that in the wake of ‘Hackgate’ it appeared, in July 2011, that “proper order in a genuinely democratic state was being restored”. Hmm. Three months later the Home Secretary, Theresa May, stood up at the Conservative Party conference and argued for the abolition of the Human Rights Act on the false grounds that it prevented an illegal immigrant from being deported, because he had a cat. It wasn’t true – but she had read it in the papers.

Alice Miles is a PhD student in the LSE Social Policy Department. Her research focuses on neighbourhood inequality and social well-being. Read more reviews by Alice.