Ed: The Milibands and the Making of a Labour Leader. By Mehdi Hassan and James Macintyre. Biteback Publishing. June 2011.

Amazon
Listen to the podcast of the launch at LSE with Mehdi Hasan: 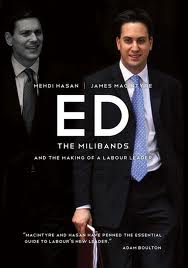 Writing the first major biography of a political figure, which is what Mehdi Hasan and James Macintyre have done with Ed: The Milibands and the Making of a Labour Leader, is always challenging. The first major work looking at Margaret Thatcher did not reach the public until a year after she entered Downing Street and five years after her election as Conservative leader. Even though publishers would be quicker to respond to the rise of John Major, Tony Blair, William Hague and others, they all had relatively substantial parliamentary careers from which their biographers could draw from. Indeed, the only recent party leader with a comparably thin record was David Cameron, the present occupant of Downing Street.

The parallels between the career trajectory of Miliband and Cameron, are superficially striking. For instance, both had the advantage of family connections, entered politics as advisors, took mid-career breaks and enjoyed the close patronage of their predecessors. However, while Cameron spent most of his time as a researcher in the Conservative party’s central office, his two stints with Norman Lamont and Michael Howard proved to be short lived. In contrast, Ed Miliband was close to Gordon Brown from 1993 right through to his own election to parliament in 2005. Miliband even phoned Brown from Harvard to discuss foreign policy, where he was taking an eighteen month sabbatical.

Because of this, Hasan and Macintyre do not excessively rely on anecdotes. One chapter is devoted to Ralph Miliband while another covers Ed’s schooling; the authors make a strong case that both his father’s career as an intellectual and activist, and Ed’s time at Haverstock played an important role in shaping his views. In contrast, Francis Elliott and James Hanning, authors of Cameron: The Rise of the New Conservative, were forced to fall back on biographies of Cameron’s family and friends, including Samantha Cameron’s parents and grandparents in order to compensate for their subject’s lack of concrete achievements.

It could be argued that more, rather than less, space could have been devoted to personal matters. While the title implies that the relationship between Ed and David Miliband is one of the main themes of the book, this is not fully explored in any detail until the account of last year’s leadership contest in the final third of the book. Another curious omission is while Miliband’s time as an undergraduate at Oxford and a lecturer at Harvard get their own sections, his stint as a postgraduate student at the LSE is only mentioned in passing.

Another, more substantial, element that could have been brought out more fully was Ed Miliband’s views on the response of the Brown administration to the financial crisis. Although the book talks about his time in the charge of the Department for Energy and Climate Change, especially his attempts to block the expansion of Heathrow and his role in the Copenhagen climate talks, no indication is given to his views on wider issues. It would have been fascinating to have seen what Miliband thought of the series of interventions that began with the bailout of Northern Rock, and culminated with the government taking control of large swathes of the British banking system. While the final decisions on these matters were made by Gordon Brown and Alistair Darling, it would have been very surprising if he had not expressed a view on the matter within Cabinet.

Overall, Hasan and Macintyre have done a commendable job, especially given the compressed timeframe that they had to write this book in and the fact that their subject has been criticised for (up until now) doing a relatively ineffective job of holding Cameron to account. The decision to structure the book into nineteen chronological chapters, each dealing with an aspect of Miliband’s career, means that the book is well balanced.

However, this is likely to be superseded by more substantial works, especially as more information becomes available and the trajectory of Ed Miliband’s leadership becomes clearer. Until such works appear, Ed: The Milibands and the Making of a Labour Leader will appeal to both the casual reader and those studying British politics in more depth.

Amazon
Listen to the podcast of the launch at LSE with Mehdi Hasan:

Putting ‘Counter-Jihad’ Groups Under The Microscope