Divisions within dominant political parties are nothing new, as has been illustrated by the Conservative Party’s renewed infighting over Europe. But how does internal party dissent begin, and what effects does it have on political parties in power? Ulrich Sieberer finds this book to be rich in empirical detail, praises its analysis of how some parties are able to manage internal divisions, whilst others are not, and recommends it as an insightful addition to the literature on intra-party politics. 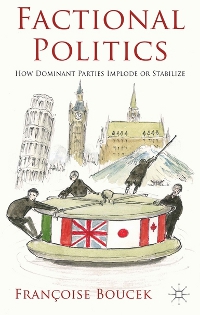 Françoise Boucek’s book, Factional Politics: How Dominant Parties Implode or Stabilize, offers a comparative treatment of intra-party politics, focusing on the question of how dominant parties manage internal conflict and how such conflicts lead often to their demise. These questions are addressed based on four qualitative case studies of the British Tories during the Thatcher and Major years, the Canadian Liberals from the late 1960s until today, the Italian Christian Democrats (DC) from 1945 until the mid-1990s and the Japanese Liberal Democrats (LDP) since 1945.

This book is timely for two reasons. First, the conflict in UK politics over Europe recently demonstrates the relevance and persistence of intra-party conflicts within the Tories. Second, the academic literature on political parties increasingly studies intra-party behavior. Intra-party groups such as more or less organized factions, wings, or tendencies are often decisive actors in intra-party competition.

The book begins with two general chapters on the explanation of one-party dominance and the link between this dominance and intra-party factionalism. Two chapters (3 and 6) analyze the different institutional incentives that majoritarian (UK and Canada) and non-majoritarian (Italy and Japan) political systems provide for factionalism. The remaining four chapters are detailed case studies of the four parties relying mostly on qualitative data and some quantitative measures.

The case studies are rich in empirical detail, and are rather difficult to summarize, so I will focus on the more general arguments of the book regarding the relationship between dominant parties and factionalism. First, Boucek argues that the extended dominance of a party breeds internal dissent because politicians who do not have to worry about reelection start using the party primarily as a vehicle for individual ambition and for extracting rents. In the end, this mechanism leads to the demise of a party even though some parties are successful in managing internal divisions over extended periods of time.

Second, she argues that majoritarian institutions, especially plurality elections in single member districts, and the dominant role of the Prime Minister in policy-making, as well as the distribution of offices, provide strong incentives for party unity and thus less favorable conditions for institutionalized factions. Instead, latent tendencies in the party tend to be mobilized in challenges against the party leader as in the case of the successful rebellion against Thatcher in the UK and the long-term struggles between Trudeau and Turner, and later between Chrétien and Martin in Canada. By contrast, non-majoritarian institutions, especially permissive electoral systems with elements of intra-party competition such as open lists in Italy or the Japanese Single Not-Transferable Vote (SNTV), can promote the institutionalization of factions. Strong factions can lead to problems of corruption, a weakening of the central party organization and ultimately the capture of the dominant party by rivaling factions which increases the chances of implosion.

Third, Boucek argues that the competitiveness of the electoral market determines whether factionalization can be managed, or leads to the demise of a dominant party. If opposition parties are electorally weak and/or unable to cooperate, dominant parties can persist despite internal divisions. However, once the electoral market becomes competitive, dissenters can gain from leaving the party and cooperating with the opposition to bring down the dominant party as in the case of the DC and the LDP.

There can be little doubt that the volume provides one of the most intensive studies of factional politics to date. The case studies provide a wealth of empirical information on intra-party politics in the four parties and often make a fascinating read of political cooperation, competition, and cabal. As such, students of parties should definitely take a close look at the book.

Nevertheless, the book leaves a theoretically and comparatively oriented reader somewhat dissatisfied for at least two reasons. First, the argument is theoretically underdeveloped. While various factors are mentioned that contribute to the emergence of factionalism, the ways it is managed and its ultimate effect on party survival, the book fails to develop a coherent theory. Boucek frequently refers to the elasticity of the electoral market and Hirschman’s distinction of exit and voice but does not engage in systematic theorizing about the conditions under which a stable equilibrium of factionalization breaks down, leading MPs to leave the dominant party.

Furthermore, it remains unclear what it is that individual politicians and factions struggle about. Policy differences, individual career motivations and rent seeking all play a role, but the relative importance of these goals seems to vary across cases and over time. Policy appears to play a somewhat bigger role in in the cases of the Tories and the Canadian Liberals whereas conflict in the DC and especially the LDP was largely devoid of any ideological content, at least in the later phases. Thus it would be interesting to explore in detail whether internal conflicts without policy content are harder to manage, whether the difference is tied to institutional differences between majoritarian and non-majoritarian systems, and how voters’ preferences and discontent enters the picture.

Second, the comparative setup of the study is not fully exploited. While parallels and differences are often mentioned in the empirical discussion of the cases, this information is not aggregated in a systematic way. Thus, it remains unclear what we can learn from it about factional politics beyond these four cases.

Overall, the book is valuable for readers interested in the internal life and conflicts of political parties. Despite its theoretical shortcomings and a somewhat repetitive structure, the empirical material constitutes an insightful addition to the literature on political parties and intra-party politics and underlines the increasing wariness in the discipline regarding the assumption of political parties as unitary actors.

Ulrich Sieberer directs the research group Comparative Parliamentary Politics at the University of Konstanz, Germany. He holds a PhD in Political Science from the University of Mannheim. His main areas of research are comparative legislative research, institutional design, political parties, and judicial politics. His work has been published among others in European Journal of Political Research, Party Politics, Electoral Studies, West European Politics, Political Studies, and Government and Opposition. Read more reviews by Ulrich.