Matthew Partridge finds a generally solid study of the Conservatives in opposition in this recent collection of essays.

From Crisis to Coalition: The Conservative Party, 1997-2010. Peter Dorey, Mark Garnett and Andrew Denham. Palgrave. May 2011. 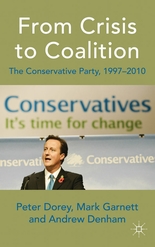 With the Conservatives continuing to trail Labour in the opinion polls, continuing friction with coalition partners, and controversy over everything from military cuts to sentencing reform, David Cameron must sometimes be tempted to wish for a return to the relative simplicity of opposition. If so, From Crisis to Coalition: The Conservative Party, 1997-2010, a collection of six extended essays will remind him that the thirteen-year period of opposition was painful for his party, with uncertainty as to whether it would ever regain power.

Indeed, the opening chapter uses the example of a High Court judgement annulling a multi-million pound donation to the Conservatives, to illustrate how their reputation as the natural party of government had diminished a decade after the 1997 election. As the authors wryly note “one wonders what the court’s verdict would have been if…Mrs Thatcher was still in Downing Street slaying ‘satanic monsters’, rather than the autumn of 2005 when the Conservatives had been out of office for almost a decade”. In the second chapter readers are also reminded that it took eleven years of opposition for the Conservatives to gain a seat from Labour in a by-election, demonstrating that the hardliners “hardly excelled at registering gains during most of their lengthy dominance of the party”.

So why was “the Conservative century”, to quote Vernon Bogdanor, followed by over a decade of Labour dominance? Peter Dorey, Mark Garnett and Andrew Denham believe the answer is relatively simple; between 1997 and 2005, the Conservatives were disorganised, poorly-funded and out of tune with public opinion. However, after their third election defeat they completed their structural reforms, elected (in David Cameron) a leader who was more pragmatic than ideological and were able to attract sizable donations.

Of course, this analysis, which largely reflects conventional wisdom, is qualified by several caveats. For instance, they point out that not only did Cameron fail to win the 2010 election outright, Conservative leads in the polls from December 2005 onwards were briefly reversed in the weeks following Gordon Brown’s accession to 10 Downing Street. Indeed, at the height of Brown’s honeymoon one poll showed a 13 point Labour lead while another “found that almost half of respondents considered Cameron to be ‘superficial’, while an even higher percentage thought that it was no longer clear what the Conservatives stood for”.

Although the book ends with the 2010 election and does not discuss the performance of the coalition, there authors have some words of warning for Cameron. As they presciently note, “having played a key role in convincing the electorate that the Conservatives were no longer the ‘nasty party’, Cameron is likely to suffer in public esteem if he is forced to preside over the kind of socio-economic cataclysm which Thatcher and her allies were perfectly willing to confront”. Indeed, the unpopularity of Cameron’s reorganisations of the NHS, Military and Higher Education, which go beyond simple cuts in public expenditure, is clear.

Only a few criticisms can be made. The section on Conservative opposition to Cameron’s downplaying of tax cut obscures the fact social conservatives and Eurosceptics feel far more aggrieved. The authors also leave themselves open to criticism if their prediction that “Cameron is more likely to be a one-term premier than to the leave the parliamentary stage, after a decade in Downing Street”, proves to be incorrect. However, From Crisis to Coalition is a generally solid study of the Conservatives in opposition.