Given Janan Ganesh’s status as a Financial Times political columnist and his choice of subject matter, it was inevitable that George Osborne: The Austerity Chancellor would attract attention. Timothy Heppell finds the book illuminating when it comes to understanding the professional career of George Osborne prior to his sudden emergence as a strikingly youthful Shadow Chancellor. However he cautions that many might find the book frustrating, because of both the author’s undisguised admiration for the Chancellor and how little attention he devotes to Osborne’s time in government. 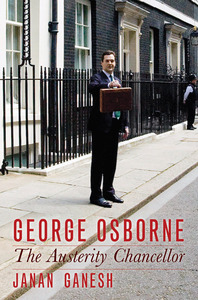 Over recent years, Janan Ganesh has emerged as an insightful commentator on the implementation of the coalition government’s deficit reduction programme. Given his status as political columnist at the Financial Times, his first attempt to shift from the short and concise demands of newspaper coverage and into the longer form of biography was bound to provoke interest.

His subject of choice, George Osborne, is an interesting one. Osborne is a controversial politician – one of the “arrogant posh boys” in the view of one of his own backbenchers, Nadine Dorries. He has proved to be an unpopular Chancellor, not just due to the circumstances that have faced him while at the Treasury, but because the success of his strategy remains unproven and in the interim period he has inflicted considerable pain on the most vulnerable in society. Therefore, gaining a deeper insight into what drives Osborne should be of real value to our understanding of contemporary British politics. Ultimately, however, the author’s Conservative sympathies (having worked at the think tank Policy Exchange) might provide a motive for some to question the neutrality of The Austerity Chancellor.

The strength of this biographical account is that it provides the reader with a clear sense of the journey that Osborne has experienced prior to entering Number 11. There is a detailed evaluation of his career development from his time as Chief of Staff to William Hague to his rapid promotion to shadow Chancellor within only four years of entering Parliament at the age of 34. The insights provided here are given added value by the fact that the author has secured access to his inner circle. Although not an official biography, Osborne himself agreed to be interviewed by the author.

What emerges is a sympathetic analysis of a complex and somewhat calculating politician. The author seems to be keen to ensure that the reader understands and appreciates that Osborne is at heart a pragmatist and not an ideologue. However, the emphasis appears to be on identifying the dynamics of personal relationships within the Conservative Party and the coalition, rather than providing the reader with a detailed critique of his economic strategy. Disappointingly, the less successful aspects of Conservative politics in the Cameron era – such as the appointing of, and backing for, Andy Coulson; or the failure of the Big Society narrative to resonate – are either downplayed or Osborne is distanced from them.

Those who instinctively do not warm to Osborne will find this a frustrating book to read. For political anoraks understanding his role within Conservative modernisation may be interesting, but as the title suggests his real importance as a politician stems from his formulation, implementation and justification of austerity politics. Yet within the twelve chapters and 300 pages of this book only one chapter and forty pages are devoted to his time in 11 Downing Street. Although Ganesh does become slightly more questioning here, notably over the mishandled 2012 Budget, the criticisms are limited. The overall impression is that this book is designed to make the reader understand the difficulty for Osborne in being Chancellor in difficult times, rather than for the electorate, many of whom are the victims of his so called ‘pragmatism’.

At times the book appears too impressed by Osborne. The tone is set in the prologue when we are told that ‘in an age of professional politicians, he was the most professional’, and that he was a ‘flinty pioneer’ and the ‘boldest finance minister in the West’. All of this may go down well for readers of a centre-right disposition, but for those looking for a critical examination of the economic record of the coalition this may not hit the mark.