The previous Labour Government lost office after the party’s longest stint in Government, eventually losing power under Gordon Brown against a backdrop of intellectual fatigue and economic crisis.  Eunice Goes reviews Timothy Heppell and Kevin Theakston’s impressive new book on the fall of Labour Governments, and finds recurring themes echoing down the generations. 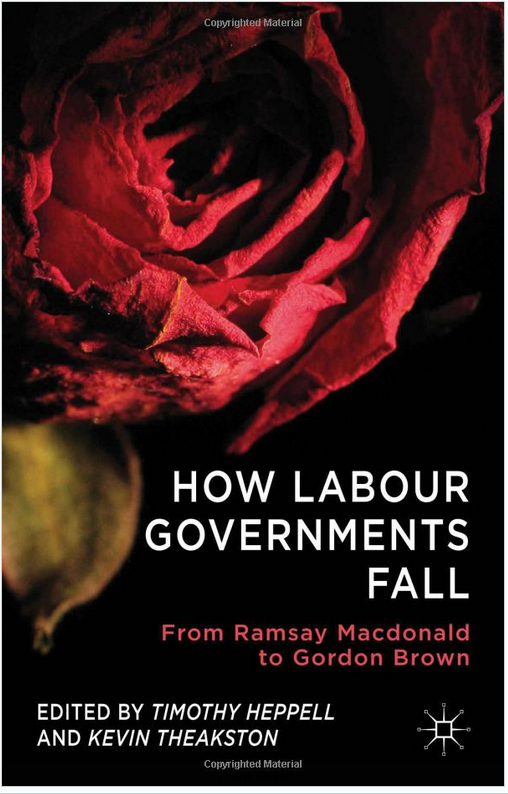 It is a truth universally acknowledged (by British politics experts at least), that the 20th Century was a Conservative one. Less well-known though are the reasons that explain why the Labour Party lost so many elections throughout its history.

How Labour Governments Fall: from Ramsay MacDonald to Gordon Brown, edited by Timothy Heppell and Kevin Theakston, seeks to address this gap in British politics research and offers insightful, thought-provoking and plausible explanations to this phenomenon. More importantly perhaps, this volume, which includes contributions by leading Labour historians and political scientists, offers important lessons to the current Labour leader, Ed Miliband. For these reasons, this volume should be a required reading to anyone interested in British politics and in particular in Labour party politics.

This volume tries to go beyond the typical explanation for Labour’s history of electoral defeats that normally centres on the perception that the Labour Party is an ineffective manager of the economy. The authors of How Labour Governments Fall: From Ramsay MacDonald to Gordon Brown, not only test the validity of this assumption but argue as well that ‘more complex reasons’ explain Labour’s poor electoral performance. In particular, this collection examines Brian Brivati’s claim that historically Labour’s statecraft has been less successful than the Conservatives’.

The result of this collection, rich in analysis illustrated by bite-size illuminating historical facts, is the identification of patterns and variables that are common to all (or most of all) of Labour’s electoral defeats since 1922. For instance, the different authors suggest that Labour leaders are not particularly good readers of the public mood because in four different occasions they’ve ill-judged the timing of general elections. Indeed, ill-judgement and lack of nerve led Attlee in 1950-51, Wilson in 1970, Callaghan in 1978 and Brown in 2007 to defer the timing of the general elections to a less propitious date.

Intellectual fatigue is another factor that partly explains Labour’s history of electoral defeats. In their nuanced analysis of Clement Attlee’s government, Robert Crowcroft and Kevin Theakston emphasise the fact that in 1951 Labour ‘seemed to have run out of steam; it displayed few policy ideas, its leaders were physically exhausted’ (p. 62) and the party lacked a ‘crusading zeal’ (p. 65).

The same intellectual and ideological fatigue undermined Gordon Brown’s premiership. Though other factors contributed to Brown’s downfall, Timothy Heppell argues that Brown’s premiership was ‘characterised by policy confusion and the absence of a coherent agenda shaped by clearly defined and ideologically informed objectives’ (p. 147). As a result of this, Brown lost authority within the Cabinet and respect within the Labour movement (p.165).

Labour’s unlucky history of electoral defeats is also explained by factors that were beyond the control of the party’s leadership. For instance, the different authors point out that a hostile press was an important factor in determining the defeats of Ramsay Macdonald in 1924 and 1931, Harold Wilson in 1970, James Callaghan in 1979 and Gordon Brown in 2010.

But the most important external factor explaining Labour’s history of electoral defeats has been the economy. For most of its history the Labour Party faced considerable difficulties in establishing a reputation for being a competent manager of the economy. This perception has been well exploited by the Conservative Party and it has been a permanent concern of all Labour leaders. The authors of this collection examine in detail this perception and reveal interesting insights (though not all of them explicit) that challenge popular assumptions about Labour’s alleged economic incompetence.

With the exception of Tony Blair’s New Labour government in 1997, the Labour Party has always governed in difficult – sometimes extremely difficult – economic circumstances. In three separate instances, Labour was in power at the time of the three big crises of capitalism of the last 100 years: the great depression of 1929, the collapse of the Bretton Woods system and the stagflation of the 1970s and the 2007-08 global financial crisis.

Governing throughout such seismic periods can be extremely challenging to any government, but it is particularly difficult to centre-left parties. In such circumstances, centre-left parties like Labour tend to abandon and dilute their ideological and programmatic commitments in favour of public spending cuts and wage restraint.

As Keith Laybourn shows in his chapter, the first MacDonald government tried to simultaneously conduct a ‘rapprochement’ with the Soviet Union and achieve a balanced budget. Indeed, Laybourn reminds us that the then Chancellor of the Exchequer, Philip Snowden governed (in the deliciously witty words of Beatrice Webb) ‘with a Treasury clerk’s intonation’ (p. 19).  This approach was followed by the second MacDonald government and throughout the Great Depression. But, as Chris Wrigley reminds us in his chapter, following the Treasury’s obsession with free trade and the gold standard and the concomitant neglect of the unemployment situation led to a higher public deficit (p. 50).

In each individual case, Labour governments responded to these economic crises by following the economic orthodoxies of the time (and of the Treasury in particular) by favouring sound finances instead of social justice. However, as several authors of this edited volume argue, this was not this kind of response that voters were expecting from a Labour government. In all cases, the result of such approach was electoral defeat.

As Peter Dorey points out in his chapter, ‘all too often, Labour is blamed for the crises and contradictions inherent in capitalism, whereupon many voters turn to the Conservatives – who then blame their increasingly unpopular decisions on ‘the mess’ left by the ‘incompetent’ or ‘reckless’ previous Labour government’ (p. 110).This is a very pertinent point and it would have been interesting if other chapters would have analysed and drawn some conclusions about the impact of this pattern of ideological accommodation with fiscal orthodoxy and monetarism on the party’s electoral prospects.

Eunice Goes is associate professor at Richmond University’s School of Communications, Arts and Social Sciences. Her research interests lie in political parties and ideologies. She is currently writing a book about the Labour Party under Ed Miliband to be published by Manchester University Press in 2015. Read more reviews by Eunice.