After an explosive year for politics and the media, Gadi Wolfsfeld’s Making Sense of Media and Politics will appeal to those interested in gaining a thorough understanding of the powerful role that media has in shaping political outcomes, finds Andreea Moise. 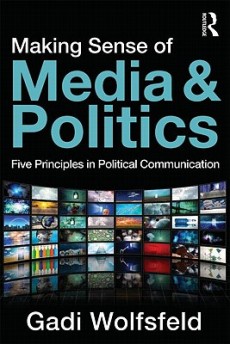 2011 has certainly been a year in which the relationship between the media and politics has further tangled. The Leveson Inquiry into the practices and ethics of the press has shone the spotlight on whether Cameron’s team knew about phone hacking practices; the findings of the Guardian and LSE study into the causes of the English riots have prompted Theresa May to announce a national review of stop and search powers; and senior politicians have warned that super-injunctions have been rendered pointless by Twitter and social networking sites.

In Making Sense of Media and Politics: Five Principles in Political Communication, Gadi Wolfsfeld proposes five central principles in examining the relationship between the media and politics. Focusing on democratic countries, he discusses first the perspective of political actors constantly competing over the news to push out political messages (1st and 2nd principles). Next Wolfsfeld takes the perspective of the media, focusing on how journalists turn political information into news (3rd and 4th principles), and finally looking at the effect of media on ordinary citizens (5th principle).

The first principle, ‘political power can usually be translated into power over the news media’,  highlights that those who have political power not only find it much easier to get coverage, but also are in a much better position to get their message across. Weaker groups are only likely to be covered by the news by taking actions considered weird or deviant. Wolfsfeld gives the example of naked protesting, used by groups such as PETA in their I’d rather go naked… campaign, fire-fighters demanding higher wages, and cyclists protesting against car pollution and promoting greener forms of transport. The author also discusses the strengths and limitations of new technology used to attract the attention of political leaders and policy-makers. On the one hand, technology such as the smart phone allows information to be distributed to and from any place on the planet, but on the other hand, it appears to be less useful when it comes to bringing about real policy changes.

The second principle, ‘when the authorities lose control over the political environment they also lose control over the news’, is used to explain the varied roles the news media plays during times of war and in attempts to make peace. Coverage of military mistakes, accidents, and ‘friendly-fire’ can make it difficult for Presidents and Prime Ministers to portray the war effort as a success. Also, an important illustration of the difficulties faced by modern leaders in the digital age comes from the release of the hundreds of thousands of documents first made public by WikiLeaks in the course of 2010. Wolfsfeld moves on to compare two serious attempts to bring peace in Northern Ireland in 1985 and 1998, and expands the idea that the news media in Northern Ireland played an important role in bringing the agreement to fruition.

‘There is no such thing as objective journalism’ considers the subjectivity of news media, and the preference given to a specific message or actor instead of another. The most important factors in determining which events get selected have to do with what Wolfsfeld labels ‘cultural’ ,’ideological’ and ‘commercial’ biases. The power of these types of biases is rooted in the fact that they are, in many cases not very obvious. For this reason, the author argues that ‘most people who turn to the news don’t think about how little access they have to most of what happens in the world.’ Wolfsfeld draws on examples like the Tyndall Report and the news coverage of the 2008 election of Barack Obama.

The forth principle deals with another form of news bias: ‘The media are dedicated more than anything else to telling a good story and this can often have a major impact on the political process’. It can be easily noticed that journalists seem to be increasingly concerned about grabbing our attention rather than providing us with intelligent coverage. The emphasis on drama can be a clear example of how the news media transform the world of politics. Equally problematic, Wolfsfeld notes, it can be an instrument for mobilizing people for war, but a poor tool for bringing about reconciliation and peace.

The final principle, ‘the most important effects of the news media on citizens tend to be unintentional and unnoticed’, focuses on the impact of the media on the way people think and behave, and is exemplified with several social psychology experiments. Wolfsfeld discusses three types of influence: framing, agenda setting, and priming. These go unnoticed by citizens who are usually unaware of their impact, and are unintentional because when journalists decide what is most newsworthy they are unlikely to think about how this will influence people’s political priorities.

While there is quite a bit of discussion about possible differences between the traditional and new media, there is almost no discussion about the differences between television, radio, and newspapers, or about the distiction between national and local news. As most of the examples that are used in the book come from U.S, the second major omission has to do with the economics of the news. However, several examples from Israel and Northern Ireland are presented in the book.

Making Sense of Media and Politics is written in a conversational style with a clear structure which will appeal to many interested in gaining a basic but thorough understanding of the powerful role that media has in shaping political outcomes. Wolfsfeld constructs  strong arguments to sustain his five principles, and encourages critical thinking among the readers in order to become more sophisticated consumers of news.

Book Review: Portrait of a Party: The Conservative Party in Britain, 1918-1945