How do governments arrive at policy decisions in the United Kingdom? There has been a great deal of commentary on the apparent disconnect between Westminster and voters, with priorities not necessarily shared between the two. This book by Peter John, Anthony Bertelli, Will Jennings and Shaun Bevan will help illuminate the reader on how these policy agendas are shaped, while offering some challenging conclusions, writes Francesca Gains. 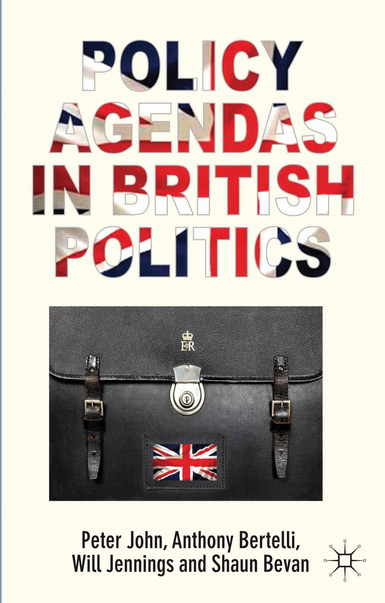 Governing is a time consuming business, and all governments face a problem of information overload when deciding what policy issues to prioritise and which to resource whilst they both govern and seek re-election. The study of UK politics has long standing debates about how governments do (or don’t) manage these dilemmas. Do governments follow public opinion seeking to capture new voters? Do they focus on implementing their manifesto promises?

Are they responsive to the media sometimes getting knocked off course by ‘events’ (dear boy)? Or are policy agendas relatively stable, insulated from public opinion and controlled, where possible, from closed policy communities? Drawing on comprehensive new datasets of how UK governments have prioritised the attention and resourcing given to different policy agendas (such as welfare, immigration or the economy), the authors of this new book test existing analyses of British politics and theories of public policy change in a book which is at the cutting edge of international scholarship.

The book is the outcome of 7 years work by the UK Policy Agendas research team supported by grants from the British Academy, the ESRC and the ESF and draws on a policy topic coding framework developed by Frank Baumgartner and Bryan Jones in the original Policy Agendas Project in the United States. The UK team coded the attention given to different policy topics by successive governments since 1945 in the annual speeches from the throne, government laws and budgetary data. This impressive endeavour has developed a time series data set on policy agendas capable of analysis alongside public opinion and media data. The resulting analysis provides fascinating, comprehensive and new insights into the dynamics of policy agendas in the UK which deserve to be widely read and consulted by those interested in understanding British Politics, and public policy theory more widely.

The book makes significant analytical, methodological and empirical contributions. The authors develop a new analytical heuristic to explain the process of governmental policy selection. The idea of ‘focussed adaptation’ is predicated upon key assumptions about the decision making process or ‘statecraft’ of governmental elites. Firstly that a re-election seeking government controls the capacity to allocate attention to a selection of the policy issues demanded by voters. Secondly that government has the capacity to take stock of new shifts in public opinion and the concerns of the media, as well as their partisan commitments. Thirdly that governments will seeks to use their considerable resources to take strategic decisions about what policy issues to focus on. Drawing on a well-used metaphor for UK statecraft the authors suggest “[T]he ship of state may maintain its course, with government making adjustments for tides and storms but heads in the same direction until a discretionary change of course occurs which alters the underlying structure of attention, steering the vessel in a different direction”.

This heuristic develops earlier theories of how policy agendas are set and clarifies the micro foundations of the relationship between decision making of elites and broader social signals very clearly. The idea of ‘focussed adaptation’ fits well with the specific institutional features of the British parliamentary state: a relatively well resourced core executive supported by a permanent bureaucracy; a dominant party system in the legislature and veto power located with a few key actors at the centre of Government.

Methodologically the authors provide clear and lucid explanations for how they collected their data and operationalized their analysis and tests of existing explanations. Taken together with the wide accessibility of the data sets through the project team web site, students and teachers of politics and public policy have access to a wonderful resource and one which lends itself to further research and student project work through mixed methods approaches as well as quantitative analysis. The availability of these resources is especially well timed given the ESRC’s Q Step agenda to enhance the teaching of qualitative methods in the social sciences.

Empirically the work provides insights into the policy agendas of British politics which triangulate and complement existing qualitative research in specific policy domains or epochs. The comprehensive scale of the datasets also permits an oversight hitherto not possible. The analysis highlights the decline of previously important policy areas like defence, foreign affairs and agriculture in the strategic policy priorities of government and the rise of new policy issues such as crime and immigration. The researchers also point to the distinctiveness of the New Labour’s adaptation of the policy landscape.

Additionally because of the relationship with a wider federation of policy agenda research teams, and the adoption of a common code book, there is huge empirical potential for the development of comparative analysis drawing on the insights and data reported in the book both on overall system dynamics and on the dynamics of individual policy areas.

Of course the book will prompt further discussion and critique as challenging books should. The ‘focussed adaptability’ heuristic emphases actors and their decision making but is situated and tested in a particular institutional setting which arguably make the tendency for the kind of punctuated equilibriums found for example in US policy agendas less likely. The wider applicability of the heuristic will need to be tested in institutional settings with more veto players and venues than the UK. Indeed only time will tell if further periods of coalition politics in the UK will fundamentally diminish the strategic possibilities for search and adjustment of policy problems to prioritise by coalition partners and lead to a greater likelihood of punctuated equilibriums.

Overall this is a book which will create new questions about how to understand the policy landscape and how to research it. The authors should be congratulated on not only providing an interesting and coherent analysis of how to understand what policy problems governments choose to focus on but in developing the analytical tools and empirical resources to address these questions.

Francesca Gains is a Professor of Public Policy at the University of Manchester. Before entering academia she worked in local government and the probation service, and has both government funded and Parliamentary research experience. Her research agenda explores the relationship between political management arrangements and policy outcomes. Read more reviews by Francesca.